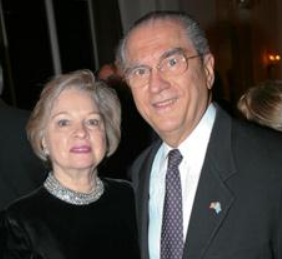 The American Hellenic Educational Progressive Association (Order of AHEPA) is elated to be the recipient of a $50,000 gift from Anthony and Millie Kouzounis of Houston, Texas, announced Supreme President George G. Horiates.

The Kouzounises made the donation during this year’s #GivingTuesday Matching Challenge; a challenge made possible by a $50,000 matching donation by E. John and Cleo Rumpakis of Portland, Oregon.  The two donations, together with several online contributions–small and large–made during the #GivingTuesday Matching Challenge, exceeded $100,000 and will go toward AHEPA’s “Century Capital Campaign.”  The goal of this development campaign is to increase the current endowment to $10 million by AHEPA’s 100th anniversary in 2022, according to Executive Director Basil N. Mossaidis.

“E. John and Cleo Rumpakis are to be lauded for setting an exemplary standard of charitable giving, and we felt a responsibility to meet it,” Anthony Kouzounis said.

Anthony is an AHEPA Past Supreme President and lifelong member of Alexander the Great Chapter 29, Houston.

“We are deeply grateful to Anthony and Millie Kouzounis for their generous gift,” Supreme President Horiates said. “Thanks to their kindness and generosity, we have taken another step toward our ambitious Century Capital Campaign goal.  Further, our mission, and the charitable programs that support it, are strengthened significantly thanks to all the kind donations received.”

According to Horiates, the challenge continues either though the $100,000 mark has been surpassed as it is never too late to donate.”

How You Can Give

During this Season of Giving, please take a moment to make the AHEPA Foundation, Inc. a priority as your 501 (c) 3 tax-deductible charitable donation by December 31.

Support your heritage by supporting the charitable programs that project and promote our heritage, strengthen our communities, and benefit future generations.