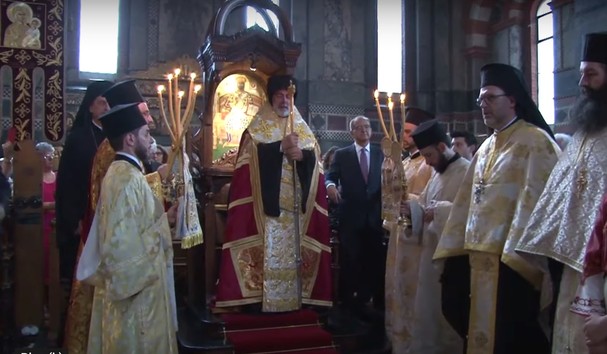 On this feast day of St. Panteleimon, Archbishop Nikitas was enthroned as the hierarch and archpastor of the Greek Orthodox of Archdiocese of Thyrateira and Great Britain.  At the Greek Orthodox Cathedral of the Divine Wisdom (St. Sophia), His Eminence, Archbishop Nikitas, was welcomed with numerous exaltations of AXIOS by hierarchs, clergy, archons, faithful and ecumenical guests. 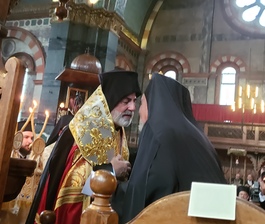 Assisted by visiting hierarchs from Greece, Europe and the United States (Metropolitans Alexios of Atlanta, Gerasimos of San Francisco, and Nathanael of Chicago), Metropolitan Emmanuel was the first to address Archbishop Nikitas.   Archbishop Nikitas thanked His All Holiness Patriarch Bartholomew and the Synod for electing him and trusting him with this ministry to the Archdiocese. He thanked his brother and with heartfelt words reflected on his parents’ love and guidance.   He thanked former Archbishop Gregorios for his foundational work in the Archdiocese and his years of dedicated service to the Archdiocese.

The Enthronement was live-streamed on YouTube and broadcast at the luncheon venue, Royal Lancaster London Hotel.

Archbishop Nikitas is the son of Constantine and Kalliope Lulias who was raised in Tarpon Springs, Florida along with his brother John.   His roots are from Krokos Kozanis and the island of Kalymnos.  Archbishop Nikitas’ biography and earlier years in the Lord’s service.Metropolitan Alexios and the Metropolis of Atlanta congratulate Archbishop Nikitas on this joyous day of Enthronement.  May Archbishop Nikitas continue to serve the Church and faithful for many years.  AXIOS!