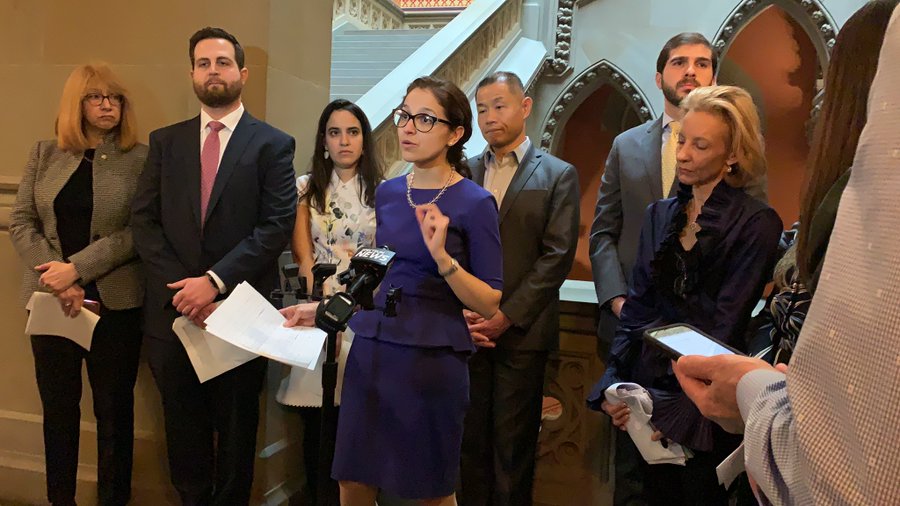 Albany, NEW YORK – NYS Assembly Member Aravella Simotas and the Sexual Harassment Working Group are continuing their fight to make comprehensive changes in the law so that targets of harassment and discrimination can seek justice.

Assembly Member Simotas and the advocates held a press conference this afternoon, calling on the legislature to support her bills to further empower workers who have experienced sexual harassment and discrimination.

“For years, non-disclosure agreements have prevented people from coming forward by holding the threat of legal repercussions over their heads,” Assembly Member Simotas said. “But the law should be a weapon for those who have seen injustice, not for those who commit it. Targets of sexual harassment should not live in fear of speaking out because of non-disclosure agreements that essentially force them into silence. This bill will ensure no one is subjected to egregious financial penalties for sharing their story.”

Many acts of workplace misconduct, such as sexual assault, are carried out by a person in a position of power. Employees who know of these acts are often afraid to report because of the risk of retaliation. Currently, the law exempts legislative and judicial employees from existing whistleblower protections. Ensuring that all employees who disclose violations of the law or improper conduct to a governmental body are protected from retaliation will improve the safety of workplaces.

“All workers must be able to report misconduct without placing their careers at risk. It is unacceptable that this loophole in the whistleblower protection law leaves employees of elected officials vulnerable to retaliation. This law only serves to shield people higher in the social ladder so they can continue to abuse their power and influence at the expense of workers,” said Simotas.

“New York workers are so fortunate to have Assemblymember Simotas fighting for their rights year after year. For 2020, she has introduced bills to ensure that workers are protected in speaking out against injustices including discrimination.  We support her bills to stop employers from using liquidated damages to punish workers, and to protect whistleblowers working for elected officials from retaliation. Workers should not have to choose between their jobs and being allowed to speak the truth,” said The Sexual Harassment Working Group.

Aravella Simotas is a leader in the NYS Assembly on gender equality issues and strengthening protections for workers against harassment and discrimination.  Last year she sponsored and steered into passage sweeping reforms to New York’s employment laws and she continues her fight for workers in 2020.