Ithaca Laundry’s vision is to help restore the self-esteem and dignity of homeless people in Athens and to create new opportunities for them by improving their personal and living conditions. For a second consecutive year, a grant of $10,000 from The Hellenic Initiative will support the organization’s noble endeavor.

THI’s contribution will help Ithaca Laundry cover all operational costs of its mobile laundry unit in its most visited operation spot in Athens. Consisting of two washers and dryers and supported by Ithaca Laundry staff and volunteers, the unit services at least 30 people every day of its operation. 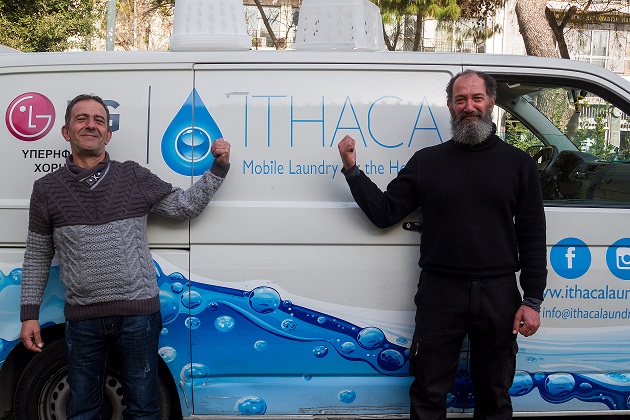 Access to laundry service will give people who have been hit hardest by the Greek economic and social crisis a better chance to re-integrate into society by providing them clean clothes for the jobs application process but also with tools necessary for their next steps, such as guidance and counseling.

Ithaca was launched by four young Athenians who decided to create a mobile laundry unit to provide homeless people with clean clothing. Having done 10,200 washes until now, Ithaca Laundry has managed to deliver 61 tons of clean clothes for displaced citizens. During the last five months alone, Ithaca has washed almost 3 tons of clothes in 120 hours of operation.

Through the grant, THI continues to contribute to addressing important problems that socially vulnerable groups and homeless people are facing in Greece.

Dean Dakolias, THI Board Member, stated: “THI is dedicated to helping those in need. We are therefore very proud to be investing our resources to this project and this fantastic team of young people. Ithaca Laundry is helping some of the most vulnerable in the community and their work has taught us all a lesson in humanity.”

Michael Printzos, THI Director of Programming, stated: “Nowadays, many of our fellow citizens are facing homelessness and are living under unhealthy conditions because of the tough economic situation in Greece. For THI it’s always been a priority to enhance organizations like Ithaca Laundry, which try to offer relief to these people by improving their living conditions and helping them build a new life. Ithaca’s work is exemplary and we are pleased to support this initiative for another year.”

Dimitra Kountourioti, Director at Ithaca Laundry. stated: “For a second consecutive year THI actively supports our work and actions. As one of our most valuable partners, THI has considerably helped us continuously increase our social impact and improve the daily living conditions of homeless people. We would like to thank THI for their valuable support.”

Our Mission: Investing in the future of Greece through direct philanthropy and economic revitalization.

We are The Hellenic Initiative (THI) – a global movement of the Greek Diaspora.