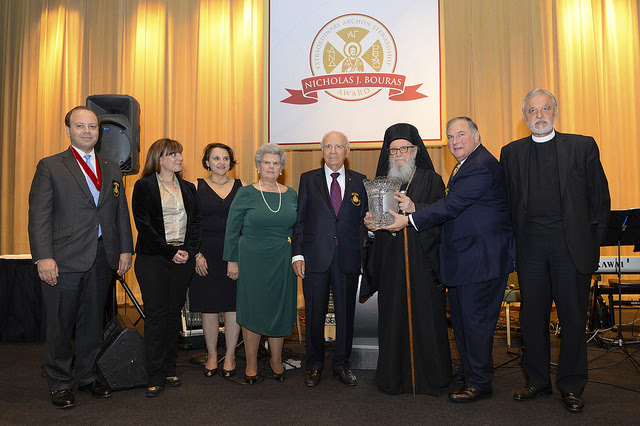 New York – His Eminence Archbishop Demetrios of America joined the Order of Saint Andrew in honoring Christopher Stratakis, Esq. by bestowing upon him the “Nicholas J. Bouras Award for Extraordinary Archon Stewardship.” The Award was presented during a special celebratory dinner dance held at the New York Hilton Hotel, which launched the Annual Archon Weekend on Friday, October 17, 2014.

Archon Christopher’s son, Archon John, served as Master of Ceremonies and his daughters, Sophia Stratakis Huling and Erene Stratakis-Allen, offered musical and poetic tributes respectively to their beloved father. Mrs. Mary Stratakis, Archon Chris’ beloved wife of 55 years was recognized as well, with the presentation of a Patriarchal broche.

Christopher Stratakis, an Archon since 1998 has served on the National Council for 13 years, and as Legal Counselor of the Order since 2001.  Chairman of the Archon Legal Committee, Archon Chris has been at the forefront in fighting for religious freedom for the Ecumenical Patriarchate, often serving on religious freedom delegations of the Order traveling throughout the capitals of Europe and in Ankara.  Archon Chris has always been the soft spoken, yet firm voice of reason during deliberations throughout his many years of service on the National Council.

Archon Stratakis is a senior partner of Poles, Tublin, Stratakis & Gonzalez, LLP, a law firm founded in 1957. He has practiced admiralty, commercial real estate and corporate law, and advises clients in connection with their personal legal matters. Throughout his life, Archon Chris has shown a devotion to community involvement. He and his wife, Maro, are members of Leadership 100. He has received numerous Hellenic and Orthodox awards, including the St. Paul’s Award and Layman’s Award, Greek Orthodox Archdiocese of North and South America; Medal of Merit for Greek Diaspora, Government of Greece; member of the Holy Sepulchre, Patriarchate of Jerusalem; the Ellis Island Medal of Honor; and several awards from Drexel University.

The Award is named after the late National Vice Commander Nicholas J. Bouras, Archon Depoutatos, who himself had demonstrated remarkable leadership as a faithful son of the Ecumenical Patriarchate and exemplary steward of the Greek Orthodox Archdiocese of America. The Award is presented annually to an individual who has demonstrated extraordinary and incomparable stewardship to the Order, enabling Archons to vigorously pursue securing religious freedom for the Mother Church of Constantinople.