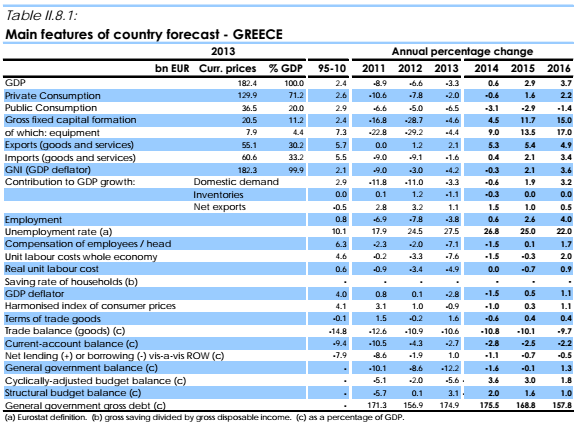 After six years of recession, 2014 is expected to be the turning point for Greece. The country’s long-awaited recovery is driven by private consumption and net exports. Its magnitude also depends on the effects that policy uncertainty may have on investment.

The Greek economy is expected to return to growth in 2014. Following a weaker than expected first half, GDP growth in seasonally-adjusted terms became positive in the second quarter this year, and a strong third quarter figure is expected. After strengthening throughout 2014, the Economic Sentiment Indicator and the Purchasing Managers’ Index began to weaken towards the end of the summer. The persistently tight credit conditions and slow absorption of EU and EIB funds continue to be a significant constraint on the recovery of investment. However, private consumption is expected to rebound fast and exports to continue performing strongly owing to the tourism and shipping sectors. Greece’s economy is projected to grow by 0.6% in real terms this year. The recovery is projected to gain strength next year. However, uncertainty over policy implementation looks set to continue weighing on investment decisions in the first half of 2015. Private consumption growth is supported by low inflation expectations, increases in disposable income and the use of precautionary savings held outside the banking system during the crisis. Exports are projected to surge in 2015, supported by the euro’s depreciation and gains in competitiveness and quality of the business environment. As a result, real GDP is forecast to pick up markedly to 2.9% in 2015. In 2016, real GDP is projected to continue expanding by 3.7%, as investment gains momentum and the economy begins to reap the benefits of ongoing structural reforms. Greece’s current-account deficit is projected to reach 2.8% of GDP in 2014 and then improve to  2.5% in 2015 and 2.2% in 2016, as exports pick up with the recovery and benefit from reforms. Unemployment is expected to drop to 26.8% in 2014 reflecting the creation of new jobs and the effect of employment support programmes. A relatively strong fall in unemployment to 25.0% in 2015 and 22.0% in 2016 can be expected thanks to the pick-up in investment, the continuation of employment programmes, and ongoing structural reforms bearing fruit. Consumer prices are expected to fall moderately by 1.0% in 2014, reflecting falling unit labour costs and the implementation of product market reforms, notably to remove distortions and increase competition in the retail, health and energy sectors. As the economic recovery gains pace, prices are expected to increase by 0.3% in 2015 and 1.1% in 2016. Greece’s GDP growth could turn out weaker than forecast if uncertainty on policy implementation has a stronger-than-projected effect on confidence and investment, or if geopolitical events have a bigger-than-expected impact in the region. On the upside, exports may exceed expectations and investors’ confidence could pick up owing, in particular to the successful processing of non-performing loans and to the positive results of the  Asset Quality Review and stress tests. Overall, the balance of risks points to the downside since uncertainty is significant for the next few months.

The budgetary situation is improving However, the underlying fiscal situation improved significantly last year. In 2014, the headline deficit is projected to fall to 1.6% of GDP, given the one-off nature of banking support costs in 2013 and continued budgetary improvements such as a major income tax reform and expenditure consolidation. This forecast assumes that, as in recent years, the government exerts close controls on spending towards the end of the year to ensure that its 1.5% of GDP primary surplus target for 2014 is met. The projections for 2015 and 2016 assume that Greece will meet the 3.0% and 4.5% of GDP primary surplus targets of its programme as a result of the fiscal-structural reforms under Greece’s programme and the improved economic  environment. Accordingly, Greece would record a headline general government surplus of 1.3% of GDP in 2016.

The fiscal adjustment and the structural reforms during the past years have improved significantly the Greece structural fiscal balance and turned it into a sizeable surplus. The government’s debt-to-GDP ratio is expected to stabilise this year, before declining markedly in 2015 and beyond, as the primary surplus continues to improve and economic growth continues. Minor bank recapitalisation needs following the stress tests are expected to result in lower borrowing from the EFSF reducing the debt ratio accordingly.