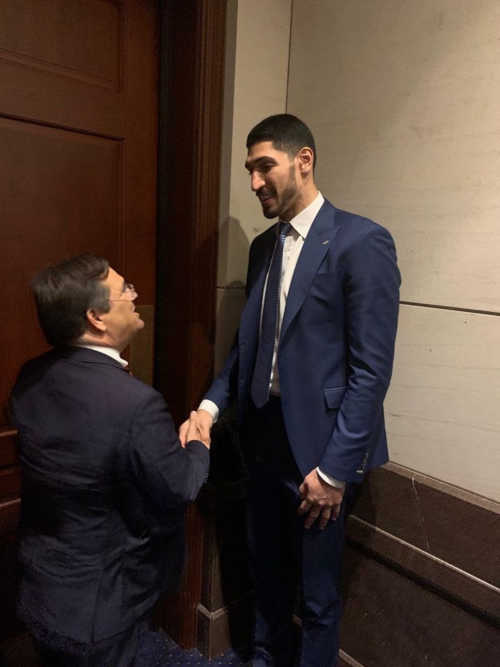 From the newsdesk of Congressman Gus Bilirakis:

So a short Greek and tall Turk meet at the U.S. Capitol…That might be the opening of a cross-cultural joke, but the actions of Turkey’s President Erdogan are NO joke. Boston Celtics star Enes Kanter shared with me the unprecedented harassment he has suffered at the hands of Erdogan’s bullying simply for pointing out human rights violations perpetrated by the Turkish regime. Like Kanter, I called for President Trump to cancel last week’s meeting with the Turkish leader. A NATO ally that continues to militarily occupy an EU nation, harasses and jails journalists, denies religious freedom to the Holy See of over 300 million Orthodox Christians, violates the Exclusive Economic Zone of a sovereign nation, provocatively infringes on the air space of another, and systematically tries to annihilate the Kurds, does not deserve the ear of the leader of the free world. Though feet apart in height, Enes Kanter and I see eye to eye. I will ensure his voice is not silenced as he speaks truth to power. #shortgreek #EnesKanter