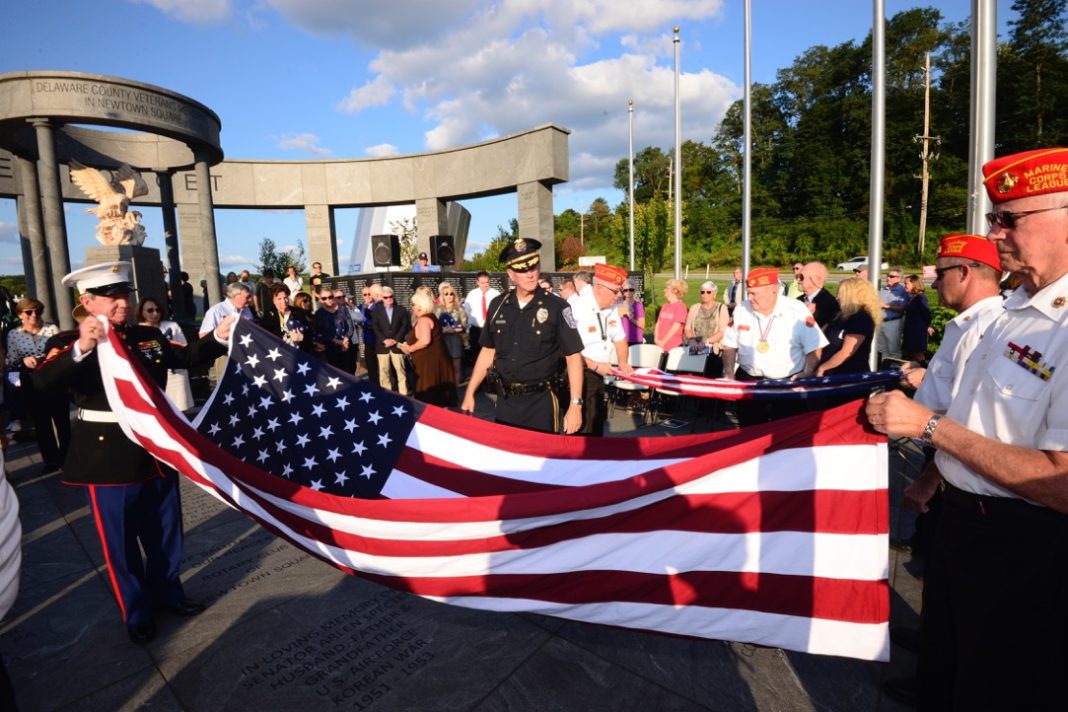 In Celebration of the 30th Year Anniversary of the Hellenic News of America newspaper, The Kotrotsios Family

The ceremony, traditionally with two casket flags is held the second Sunday from April thru November at 5pm, rain or shine.

flags, family members participate in the ceremony.  They assist in raising and lowering their veteran loved ones casket flag and

receive it back as the ceremony ends with the folded flag presented back to the family with military honors.

If you are interested in participating in this program with your veteran loved ones casket flag, send an e mail with their name, military

credentials, brief description of their service and picture to [email protected]

Being honored for service to country, family, culture and traditions, the crowd of family, friends and associates was welcomed by DCVMA President & Army Veteran Guy Fizzano with the ceremony lead by Dennis Murphy, Vietnam Army veteran, Silver Star recipient and DCVMA Co-Vice President and invocation delivered by The Honorable Clement J. McGovern. The Casket Flag Raising portion of the program under the direction of Police Chief Joe Daly, US Marine & DCVMA Co-Vice President was supported by the Smedley D Butler Marine Detachment and included Bugler, Marty Holahan and a Rifle Salute by the Vietnam Vets of America.
The crowd listened in earnest as the distinguished careers of those recognized was recounted by Carmen Belefonte, Esq, US Army veteran representing the Delaware County Bar Association and who also serves on the DCVMA Advisory Board.

Thanks to the volunteer efforts of DJ and sound engineer, John “Hugo” Useller, the crowd from the legal community were serenaded by the Theresa Flanagan Murtagh, Esq, The Media Theatre State Street Miracles under the direction of Tim Haney and The Silvertones of Strath Haven High School under the direction of John Shankweiler.  The Media Theatre State Street Miracles is a performance troupe of 14 adults with intellectual disabilities and have a mission to spread the joy of music and dance while increasing awareness of the talents and abilities of people with disabilities. The Silvertones is a select 37 voice a capella group of singers from Strath Haven High School in Wallingford and has performed for the State and All-Eastern conferences and embarks on a performance tour of select cities in Italy every other year.

Many in Delaware County know of the career highlights of these individuals, but like other soldiers of their generation, they were quiet about their military service.

Senator Clarence D. Bell served in the “Citizen’s Military Training Corps. in 1932 and the US Army & Reserves from 1935 to 1940. During his military service, he spent  62 months in active duty as Major General in  WW II. At his death in 2002, Bell was the longest-serving public official in Pennsylvania and remains the longest serving official in Pennsylvania history with a record 48 years in office.

The Honorable Francis J. Catania served in the military from 1941 to 1946 in the US Air Force stationed in the China-Burma-India Theatre.  A veteran of “flying the hump”, Catania spent 16 months in China as a statistical and personnel officer.

The Honorable Joseph T. Doyle served on active duty in the US Army as PVT 1st Class and was honorably discharged in 1955 after a tour of duty in Germany.

O. Warren Higgins, Esquire was  drafted into the US Army Air Corps during WW II in June of 1942 as a result of the Japanese bombing of Pearl Harbor.  Stateside, stationed in Biloxi Air Corps base, Mississippi, for basic training he served as an instructor and special duty auditor before being transferred overseas to Manilla, Philippines; in the islands of Okinawa he served as Acting First Sergeant of the Air Service Group Squadron.  Upon surrender of the Japanese, Higgins squadron was sent to Japan as part of the occupation forces. His tour of service ended in early 1946 after surviving a typhoon while at sea on his way back to the states.

Edward Kassab, Esquire, served in as a Merchant Marines and joined the Army enlistment program. Kassab was called to active service and sent to officer’s candidate school where he was commissioned as a Lieutenant in the US Army and served in the Philadelphia region.

John J. Maffei, Esquire, served in the US Navy as an instructor at the Fleet Training Center in Norfolk, VA from 1945 to 1948.

Charles Ewing Rankin, Esquire, was drafted into the US Army in 1942, and sent to Camp Forrest, Tennessee, for basic training and then entered the Army Air Corps as a second lieutenant in the Corps of Military Police and served in Great Britain. Rankin’s duties included debriefing pilots after missions over Germany; serving as an attorney at courts-martial and by the end of the war, as the head of a prisoner of war camp in Germany.

The Honorable Matthew J. Ryan was a First Lieutenant with the Unites States Marine Corps. The former Speaker of the Pennsylvania House of Representatives had a career spanning 40 years in the Pennsylvania Legislature including more than 30 years in leadership positions.

The Honorable Robert A. Wright was a member of U.S. Army during WW II serving from 1943 to 1946.  Serving with the distinction of being the first Afro American judge to sit on the bench in Delaware County, he was honored to be one of the only father/son teams serving on the Bench at the same time.

There is nothing as thought provoking than to watch the sun set as taps plays & Old Glory is lowered for the evening. This monthly Casket Flag Raising Ceremony is held from April thru November. Traditionally on the second Sunday of the month, the remaining ceremonies are scheduled for October 15 and November 12 at 5pm.  Held rain or shine, the public is invited to attend.

For more information on how to honor your veteran loved one flying their casket flag e mail [email protected] or call 610 400 8722.  Personally inscribed bricks in memory of veteran loved ones passed or still here are the gift that keeps on giving, great for birthdays, holidays and special occasions and they come with a personalized certificate suitable for framing. Bricks can be purchased on-line at www.DelcoVeteransMemorial.org 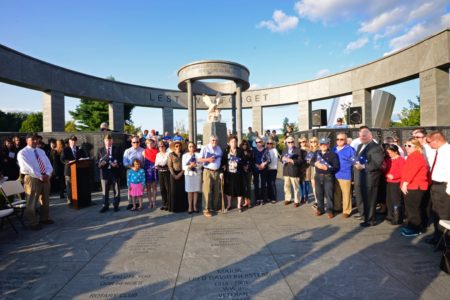 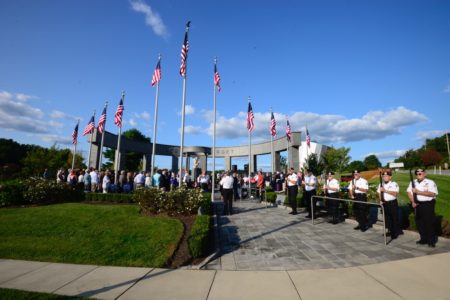