Across the Green Line: Experiencing Occupied Cyprus by Matthew Kokkinos 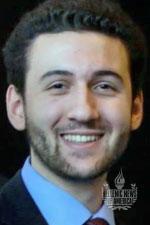 This past June, I participated in the AHIF Foreign Policy Trip to Greece and Cyprus, an opportunity which provided me with a chance to examine political issues facing both countries through meetings with government officials, academics, and site visits. Of all of these experiences, the visit to Occupied Cyprus left the biggest impression on me.

On the day that we were scheduled to cross the Green Line and enter the Occupied Territory, I was curious about what we might see.

My father, having grown up in Cyprus, had told me about what he remembered from those parts of the island, as he was only 13 years old when Turkey invaded in 1974. By chance, just a day or two before the invasion, he and his family had left from nearby the coastal city of Kyrenia to return to Lefkosia, the capital, to run errands before returning to the coast; had they stayed, they would have likely been among the victims of the attack.

Since then, neither he nor anyone else in his family had ventured across the Green Line, meaning that I would be the first to see it. With this is mind, I anxiously waited to find out what lied across the divide and what had become of Occupied Cyprus.

Almost immediately after crossing the Green Line – and going through ‘border control’ for the ‘Turkish Republic of Northern Cyprus’ – we came across nationalist monuments built to commemorate what the Turkish Government calls “The Happy Peace Operation”. In their sharp fascist architectural style, they were clearly out of place among old and ragged buildings, seemingly trying to spread a layer of pride and gloss over the less than prospering occupied section of Lefkosia. But as we drove out of the city towards Kyrenia, we noticed new construction in multiple areas – hotels, apartments, casinos, homes – and I realized that with every new building and business and home, the possibility of Cypriots returning to their homes in a reunification agreement would continue to shrink. Neighborhoods and communities, already changed by the effects of the invasion, were now being permanently altered by illegal commerce and settlements, and land was being changed in an uncontrollable manner.

In addition to the illegal construction and settlements, we passed numerous Turkish military barracks situated throughout Occupied Cyprus, which continue to house the roughly 40,000 Turkish soldiers occupying the territory. With those forces, Turkey has maintained its de facto control over roughly 38% of the island since 1974.

Upon arriving in Kyrenia, I saw how new money flowing into Occupied Cyprus had led to the construction of new neighborhoods, and a newly-constructed casino stood out from the low-rise buildings in the downtown area. You would never know the invasion began in Kyrenia; most of the buildings looked new, and no remnants of destroyed buildings from the bombings could be seen, unlike in Lefkosia.

As we walked around Kyrenia Harbor, I wondered how much had changed since the time when my dad used to visit with his family. Seeing restaurants and stores open for business in the port – no doubt some of them used to be owned by Greek Cypriots – gave me a feeling of resignation. Quite literally, individuals had left their livelihoods, and others had walked in to fill the void, just as with my dad’s home outside Kyrenia and with thousands of Cypriots’ homes and businesses across Cyprus.

Later in the day, we visited a church and a cemetery which had been desecrated and had fallen into disrepair. Next to the Orthodox cemetery was a Muslim cemetery, and the difference was striking. In the Orthodox cemetery, tombstones were broken, scattered about the ground haphazardly, weeds and grass had overgrown the plots, and graves had been disturbed. Just over a dividing wall, perfectly-kept tombstones in the Muslim cemetery were well-kept and beautified with flowers. The church, meanwhile, had been stripped of its paintings and icons, bird feces littered the floor, and dirt and graffiti was present inside.

I reminded myself that this church had peacefully coexisted with the nearby mosque at one point in its history, that the Orthodox and Muslim Cypriots had been neighbors, and that they had respected each other’s dead, as the graveyards were physically connected except for a small wall about a meter high between them. As we went back to our bus, I was left with a strong feeling of disappointment.

Our final stop for the day was at the limits of Varosha. I had heard of the Dead City, that it had been deserted since 1974, and that the occupying Turkish forces had sealed its bombed-out buildings from the public. I knew that it was frozen in time and that people had left everything on a moment’s notice and run. The city was and is a time capsule, and this was what I had been most anxious to see in Cyprus. We walked towards a barricade set up by the Turkish military on the beach – reminded by signs that photos and passage were forbidden – and we were watched curiously by Turkish Cypriots, beachgoers, and Turkish troops. I stared past the barricade at the miles of bombed-out homes, deserted businesses, and abandoned hotels along the once-popular shore of Famagusta, all frozen in time, and I felt empty.

Most people do not know about Varosha’s bombed, decaying state, the churches and cemeteries desecrated and in disrepair, the homes and livelihoods stolen, or what the occupation has done to Cyprus and its people. Most people do not even know where Cyprus is, let alone that it is an occupied country.

Matthew Kokkinos (CSSH’18) is a junior pursuing both a Bachelor of Science in Political Science and a Bachelor of Arts in International Affairs.