FM Kotzias: If we want to solve the Cyprus problem, we must address its causes-illegal occupation 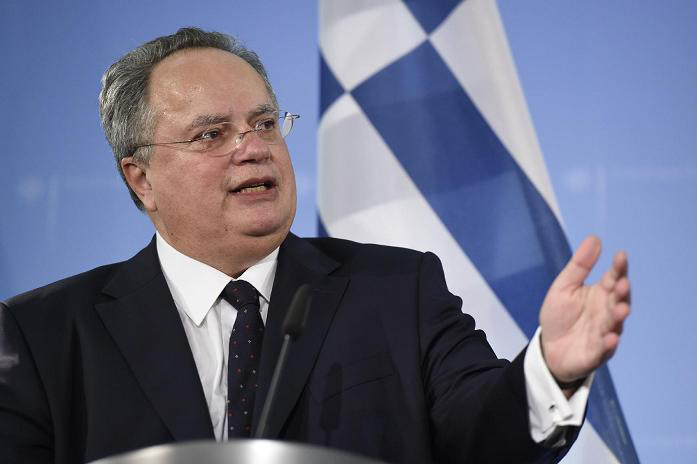 Foreign Minister Nikos Kotzias in an interview with the German news agency DPA on Saturday pointed out Turkey’s responsibility and intolerance in solving the Cyprus issue. “If we want to solve the problem, we should address its causes. Otherwise, what are we discussing? The problem is the illegal occupation of the northern part of Cyprus,” Kotzias said and expressed the hope that Turkey will understand that the resolution of the Cyprus issue is in its interest, “because, so far,” Turkey combines its desire to protect the Turkish Cypriots with its geopolitical ambitions in the region. But we want to solve the Cyprus problem and not to have to deal with the geopolitical strategy of Turkey. This is not the subject of the negotiation.” “We do not want guarantors nor do we want to be a guarantor power,” the Foreign Minister noted adding that “the right of intervention of a third country violates the international law and the UN resolutions” and cited his proposal for the signing of a Treaty of Peace, Cooperation and Security, according to which the three countries – Turkey, Cyprus and Greece – can jointly tackle threats such as terrorism and organized crime. Asked if Turkey persists with its rights as a guarantor power, Kotzias underlined that “the Pandora’s box would open”, “if we allowed the guarantor powers system” as in this case Russia, for example, could come and say: “I want to have the right to intervene in the Baltic States to protect the Russian-speaking population”. Moreover, Kotzias noted “what we need is a sovereign Cyprus. Otherwise, Turkey could, through the guarantee regime, also have a say in European Union matters.” 3 Midday Newsletter Asked how one can guarantee the rights of both communities, the Foreign Minister replied: “We are working on a treaty for a federal Cyprus. Both ethnic groups would have equal rights. The Turkish Cypriots would have their own federal state or canton, or whatever you want to call it. There will be on their own and they will be able responsible their own security as they will have their own police. For this purpose there would be federal police, which will be consisted of both Turkish Cypriots and Greek Cypriots (50 pct Turkish Cypriots, 50 pct Greek Cypriots). Apart from the federal police, there will be an international police force to intervene in case that the federal police forces are not sufficient.” Regarding the security of the Turkish Cypriots, Kotzias said that “there will be full political equality. In all important matters, they will have the right of veto. And the Supreme Court will consist of four judges from each ethnic group. They will be totally equal, much more than in other federal states.”