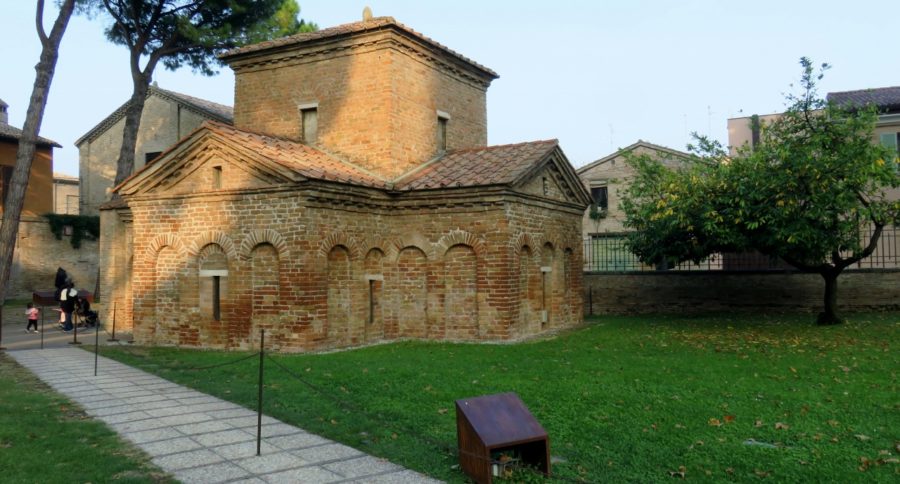 The break-up of the Western Roman Empire was accompanied by wars, invasions, and immense dislocations of the social stability of Europe. Insecurity reigned. These were the Dark Ages from 400-800 A.D. Early Christian art survived in the Eastern Roman Empire (Byzantine Empire) at Constantinople and Ireland. Emperor Constantine in 330 A.D. transferred his capital east to Constantinople (Byzantium). Christian religious art began being attached to church walls. Early Christian art belongs to the church as the text of a book belongs to the paper on which it is printed. The Christian artist had an opportunity given to no other artist before him, the opportunity of creating a complete iconography of the visual side of religion, and not merely of illustrating it.

The northern Italian city of Ravenna, situated on the Adriatic coast, south of Venice, is famous for both its late Roman architecture and its masterpieces of mosaic art, derived from its time as the capital of the Western Roman Empire (c.402-76), and later as an imperial Exarchate of the Byzantine Empire (c.540-750). Although many of its surviving structures have been heavily restored, Ravenna remains the most important site of Byzantine art outside Constantinople. The mosaic artist became the illustrator of a series of incidents for the benefit of an illiterate people.1

Galla Placidia (386 – 450 AD), sister of the Roman Emperor Honorius who had transferred the Capital of the Western Empire from Milan to Ravenna in 402 AD, built this little Mausoleum with a Greek cross plan around 425-450 as her own resting place. However, the mausoleum was never used for that purpose, because the empress died and was buried in Rome in 450.2

The outside is Roman brick work with arches. “It is simple on the outside. But once inside we will see the oldest mosaics of Ravenna of Roman-Hellenistic style,” said guide Marta. “The dome has a golden cross turned towards the East, with a blue sky and golden stars. In the four corners are the symbols of the 4 Evangelists: St. Mark’s Lion; St. Luke’s Ox; St. John’s Eagle and the man St. Matthew. The windows are made of alabaster. Galla Placidia was not buried here.” I noticed all the saints and Jesus wore Byzantine garments with purple and gold, the sign of kings. Christ is ‘The Good Shepherd’ with a calm face, golden Roman tunic, purple mantle and big golden halo. The landscape has plants and flowers, giving a person a feeling of peace.” Looking at the sky in the dome gave me a feeling of hope. I bought a plastic place mat of the blue sky with stars so I will remember its beauty.

The Greek symbol Chi Rho (meaning Christos) with Alpha and Omega Greek letters (I am the beginning and the End) was inspiring.

The three sarcophagi are of Galla Placidia, her son Emperor Valentinian III or her brother Emperor Honorius and her husband Emperor Constantius III. St. Peter with a key and St. Paul are dressed as Greek philosophers. Small fountains with white doves are drinking water. St. Lawrence with a determined face, carrying the cross of martyrdom on his shoulders is walking to put on a grill. The Greek key in bright colors decorates the arches. The mosaics are made of smalti, colorful glass and 24k gold metal leaf. It was listed with seven other structures in Ravenna in the World Heritage List in 1996. The UNESCO experts describe it as “the earliest and best preserved of all mosaic monuments, and at the same time one of the most artistically perfect”.4

Marta Chirico is a unique guide. She helped me see a lifetime wish: the mosaics of Ravenna. When I was writing my Master of Arts thesis in Byzantine history in 1973, I thought I would never go to Ravenna. I do not know Italian. Marta is a scholar who knows excellent English. Dr. Despina Siolas and Guide Marta Chirico helped me realize my dream of following the “Footsteps of Byzantium” in Ravenna. Marta created an itinerary that is not on internet tours. She recommended a great local restaurant to dine. I plan to write a series of articles based on my Ravenna experience with Guide Marta for a year.

We are honored to have this touring experience with Marta Chirico.