Diros Caves in the Peloponnese what the ancients called “the gateway to Hades.” 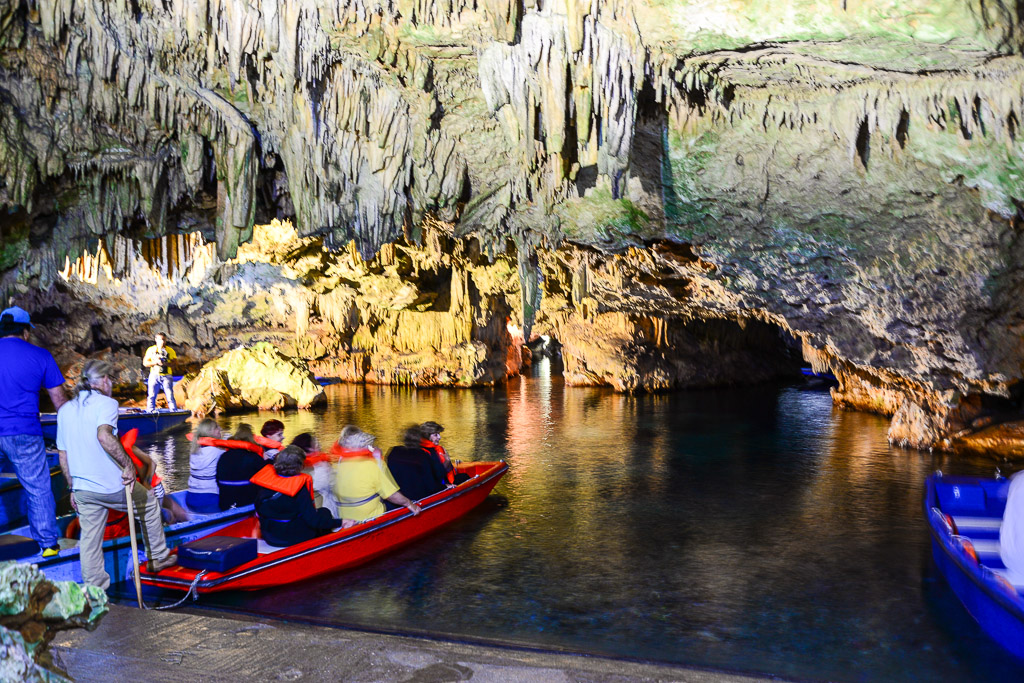 By Aurelia, Special to the Hellenic News of America

At the world-famous Diros Caves in the Peloponnese region of Greece, I waited with others to board one of the small punts (boats) that would take us through what today’s tourists call a “magical fairy-land” and what the ancients called “the gateway to Hades.”  Thousands (perhaps millions) of years in age and the exclusive creation of nature and natural forces, the cave is a crystal-clear waterway of stalactites and stalagmites whose beauty defies description.  Some have called it “the most beautiful watery cave in the world.”

My guide motioned for me to leave the group and step back with him, explaining that he was putting me in the last boat to leave.  He leaned over to whisper to the man who would be steering the boat, and the boatman then introduced himself.

He asked, winking again, “Have you paid your fare?”

“Of course,” I replied, rather bewildered.

There were only six boats going through the cave on that day and all moved slowly and silently.  The silence was broken only by occasional commentary from the boatmen, all of whom spoke in Greek–except Charon.

He told his story:

“I am the only living relative of Charon, the ferryman, who carried the souls of the dead to Hades, through the rivers Styx and Acheron.  They say my ancestor was an ugly man, with a shaggy beard and crooked nose, and that he had a mean temper.  He was an underworld “spirit’ who served King Hades, so that accounts for his not being happy.

“Charon demanded payment to transport the souls and payment was in the form of an obols (coin) placed in the mouth of the deceased.  Those who could not pay were condemned to wander in Hades for a hundred years.  He was the son of the gods Erebus (darkness) and Nyx (light) and his name means “fierce brightness.

“I am assuming you all have paid, so let us begin our journey.”

We traveled slowly and silently through crystal-clear stalactites hanging like giant icicles from the roof of the cave and stalagmites rising from the cave’s floor.  Throughout we saw what appeared to be fossils of animals and simply “ice art” in every imaginable shape and form created by the hand of nature. It was an eerie sensation to see these ancient, frozen fossils illuminated by halogen lights.

The brochures we received before boarding told us both Paleolithic and Neolithic remains from nearly two million years ago were in the cave.  Also, the various ice formations had names, such as “The Stone Forest,” “Episcopal Throne,” “Foot of Neptune,” “Palace of Pluto,” and “Lounge of Golden Rain.”  Sadly, our guide did not identify these places as we passed; we were left to guess and that became a game and a challenge.

The cave is said to be one of the earliest inhabited places in Greece.  It is speculated that the Diros and other caves were closed by earthquakes occurring thousands of years ago.

Archaeologists believe hundreds of people lived in these caves, citing tools, pots, pottery, and other evidence.  They believe, also, that it was used as a burial ground.

Charon, our ferryman, asked us to imagine people walking through the cave with torches, carrying the dead.  He said the ancients “his ancestors,” were fascinated by the underworld and that this is reflected in their myths and literature.  He said he guessed that people who did not live in the caves made pilgrimages there and considered the caves a sacred place of worship.  “Imagine bonfires lit throughout the caves, imagine people praying and offering sacrifices,” he added, speculating that some of the sacrifices were small animals.

When we came to the end of our journey by water, Charon steered our boat slowly to the dock and asked “should I turn right or left?”  I and the other passengers were bewildered by the question and so I asked “Why?”

‘My lady,”  he said, “you do not know your mythology.  When Charon was depositing the souls of the departed, if he turned right, they would be taken to the Elysium Fields where they lived forever among placid streams and in fertile fields with their own sun and their own stars.  They lived eternally in Paradise.  If Charon turned left, the doomed were taken to Tartarus (Hell) where they endured eternal suffering.”

“Do turn right, Charon,” I begged.

The boat docked so we could exit and continue through the cave on foot for a short distance until we reached the exit.  I paused glancing back at Charon before beginning the walk.

He stood still beside the boat, a handsome man holding the long pole.  He looked nothing at all like the way he described his ugly ancestor.  “Thank you for this journey through the underworld,” I said, “and thanks for the stories of the myths.”

“Oh, yes,  we consider these tales to be myths,” Charon replied.  “But to the ancients the underworld was real.  I think it is as real today as it was then.  You would agree, I am sure,  if I had turned left and not right,” he said and then winked.

The Diros Caves are approximately twelve miles south of Areopolis and just six miles from Gythio.  The winding, watery passageway is said to be a little over three miles in length, (although a number of sources give different lengths), but the actual length is not known because only a small portion has been excavated and opened to the public.  The temperature is a comfortable 60 to 68 degrees Fahrenheit, and the water temperature is usually 53F.

The caves were discovered in the 1950’s when a dog found an entrance and came back to his owner covered in red ash.  The owner investigated further and contacted government officials when he saw the entrance to the cave.  The Diros Caves were then excavated and researched and opened to the public in the 1960’s.

A wonderful way to get to the cave’s entrance is by boat.  I boarded The Albatros, a magnificent wooden boat that I guessed spent many years on the seas.  We boarded at Stoupa for a delightful two-hour journey on calm seas with an attentive crew.  On the return trip, we stopped for a swim and then had lunch.  It was a peaceful, relaxing journey and if you are ever in the Mani, it is not to be missed.

The Albatros takes tourists on other excursions besides the Diros Caves.  For further information, please visit this website www.kapouleascruises.gr  For information on the caves, please visit http://www.visitgreece.gr/en/nature/cases/diros_caves.

Aurelia is a professional travel writer and the author of two novels.  “A Lone Red Apple” is a tale of mischief and mayhem unfolding on the island of Mykonos.  “Labyrinthine Ways” is a story of life and love in the mountain villages of Crete.  Aurelia is spending the month of June writing about Kardamyli and the Mani in the Peloponnese.  She is staying at Hotel Liakoto in an apartment that overlooks the Messinian Bay.  Please visit the hotel’s website at anniska-Liakoto.com. For further information on accommodations in Kardamyli and excursions in the Mani, please contact  [email protected]