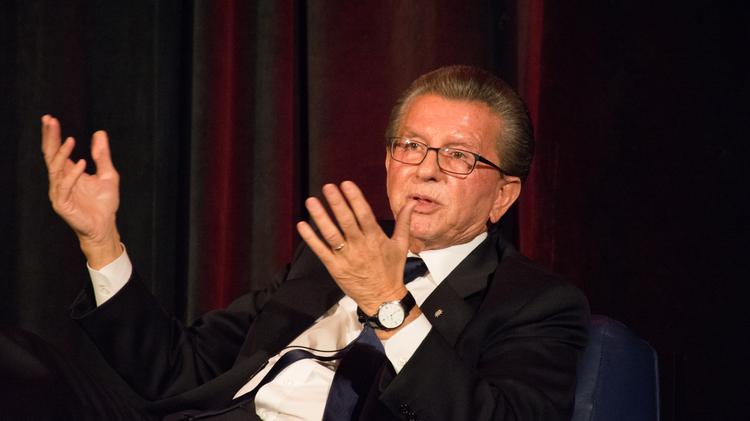 George M. Marcus, a longtime distinguished member of the Leadership 100 Executive Committee and Board of Trustees, was awarded an honorary Doctor of Humanities degree at the 74th Commencement at Hellenic College/Holy Cross Greek Orthodox School of Theology on May 21, 2016.

Some 500 people attended the ceremonies, presided over by His Eminence Geron Archbishop Demetrios, Primate of the Greek Orthodox Church in America and Fr. Christopher Metropulos, President of Hellenic College/Holy Cross. Ifigenia Kanara, Consul General for Greece in Boston, delivered the keynote address.

Marcus, a successful San Francisco entrepreneur, founded Marcus & Millichap Company and has served as its Chairman since 1971. He was honored for his deeply committed philanthropy and support of Hellenic causes and as embodying “the highest ideals of American society and the Orthodox Christian faith.” A co-founder of the Elios Society and founding Chairman of the National Hellenic Society, he was previously awarded the Ellis Island Medal of Honor and the Theofanis Economides Award of the Metropolis of San Francisco for his work on behalf of the Greek Orthodox Archdiocese of America.  He told the 55 graduates receiving degrees at the ceremony, “Open your mind. It’s all right in front of your nose every single day.”

George S. Tsandikos, Chairman of Leadership 100, offered a greeting in which he commented on the new leadership of Fr. Metropulos, who, he said, “has moved us forward with new hope and promise for the future.” He also congratulated our own Leadership 100 member George Marcus, as well as the other honorees, for their valuable contributions and service.