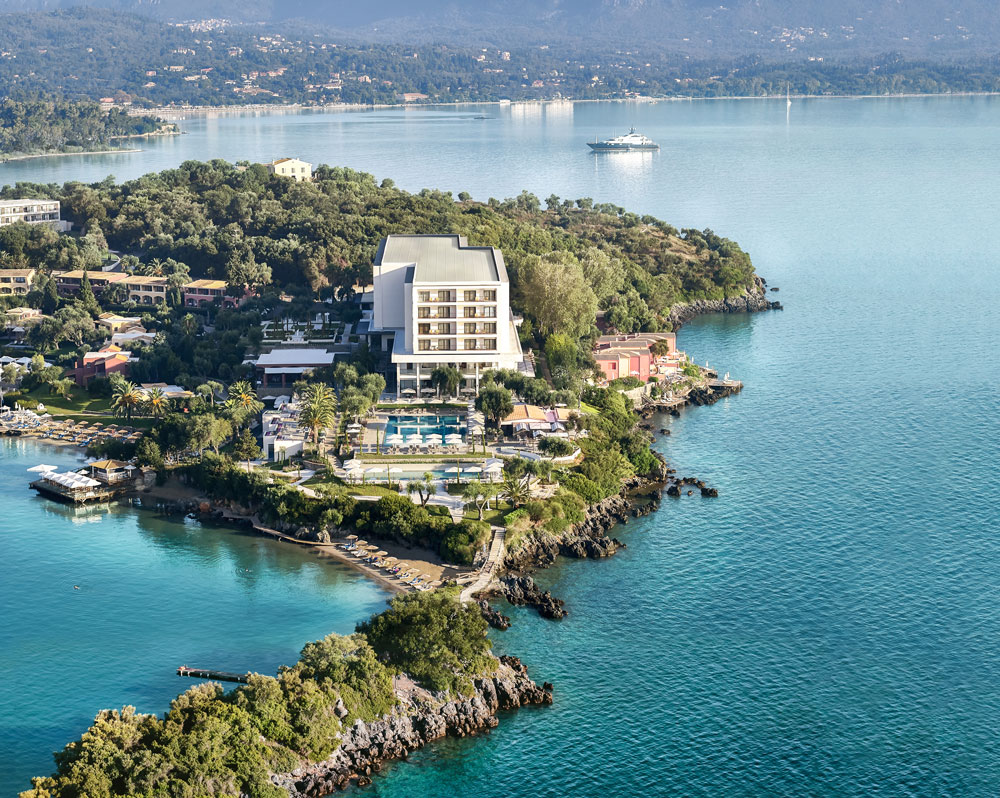 Grecotel Hotels and Resorts was a dream that started to take shape 45 years ago when visionary businessman Nikos Daskalantonakis drawing inspiration from the famous Cretan hospitality built his first hotel, the Rethymno Beach Hotel, in his hometown of Rethymno, Crete. The two brothers Takis and Nikos Daskalantonakis began as olive oil traders but today the Daskalantonakis Group is reportedly involved in 60 companies as one of Greece’s largest tourism business. The Grecotel Hotel chain has a total of 35 hotels and specializes in luxury properties that offer an unparallel hospitality experience to the more than 300,000 guests who visit the hotels.

The hotels are located in some of the most beautiful Greek Islands such as Crete, Corfu, Mykonos, Rhodes and Kos. And the person who is responsible for keeping all of those hotels running in perfect synchronicity is Grecotel’s General Manager Vassilis Minadakis. A gracious host Mr. Minadakis was happy to talk to us about the hotels and the Cretan hospitality that is his guiding light from the start of his career. “I started working at the Rethymno Beach hotel in 1976 as a bellboy and a waiter and in 1983 I became a Rooms Division Manager.” His love for the hospitality industry and hard work were instrumental in climbing the hotel hierarchy. In 2002 he became the General Manager first for the Mykonos Blue Hotel and then for King George. He then ascended to District Manager and was appointed General Manager of Grecotel Hotels and Resorts in 2015. He believes that the qualities to succeed in the hotel industry are “first be a good listener, be patient and be persistent. If you believe in something you should back it up, and if you make a promise make sure you can deliver on it.”

Grecotel Hotels have received countless awards during its operation and accolades from the foreign press. The national British newspaper The Daily Telegraph, in its review of the group’s latest grand project, The Corfu Imperial Exclusive Resort said the following, “As you walk inside, the immediate impression is of contemporary style with a hint of old-world glamour: its immaculate gardens, pools, fine dining and aristocratic furnishings. All that’s missing is a red carpet.”

The hotel poses on its own private peninsula facing the Ionian Sea and features a marbled reception, and baroque-style lounges. Mr. Minadakis talking about the hotel indicated that “the hotel went through an extensive renovation at a cost of more than 7 million euros. The rooms are stylish and modern with pristine white walls and wood floors to compliment the aesthetics of the island.” The same attention to detail is evident in the renovated Pallas Athena Hotel in the center of Athens, next to Athens Town Hall and a short walk from the Acropolis and Constitution Square. Pallas Athena is a 5-star luxury hotel that feels more like an elegant art gallery as there impressive pieces of artwork throughout the common areas.

Hotel Manager Maria Karasouli points out the exquisite artwork at the Loft Suites on the top floor where you can admire panoramic views of the city of Athens at the same time. “The rooms are designed to look aesthetically luxurious while the guests feel comfortable and welcomed at the same time. To accommodate our young guests and their families we hired some of the best graffiti artists to decorate our family rooms, and each room is absolutely unique.”

Another remarkable property is The Grecotel Cape Sounio that literally clings to the side of a pine-clad hillside with panoramic views over the Temple of Poseidon. The stunning locales and the exquisite ambiance are essential ingredients in the hospitality business but the most precious commodity of the Grecotel Hotels success according to Mr. Minadakis are the people who work there. “We are very proud of our employees. We invest a lot of time and effort in cultivating a culture that is guided by the Cretan hospitality” he said. The recruitment process is vital in bringing in the right people. “We are looking for people who share the same values of hospitality as we do, guests’ needs come first. In Cretan homes, every visitor is an honored guest and that is our philosophy with our hotel guests as well.”

And the innovations do not stop with hotel properties. Agreco farm is an organic farm outside of Rethymno with wine vineyards, olive trees, animals and a Cretan tavern that has received the highest quality honor by Vanity Fair magazine. Mr. Minadakis is optimistic and upbeat. “New investments include another luxury hotel in the center of Athens, infrastructure upgrades in existing hotels and the creation of new parks. We invite everyone to come and experience Cretan hospitality at its best.” Golf Clubs are also available in Athens, Rhodes and Crete. The Corfu Golf Club that is located at Ermones is considered one of the most beautiful in Europe.