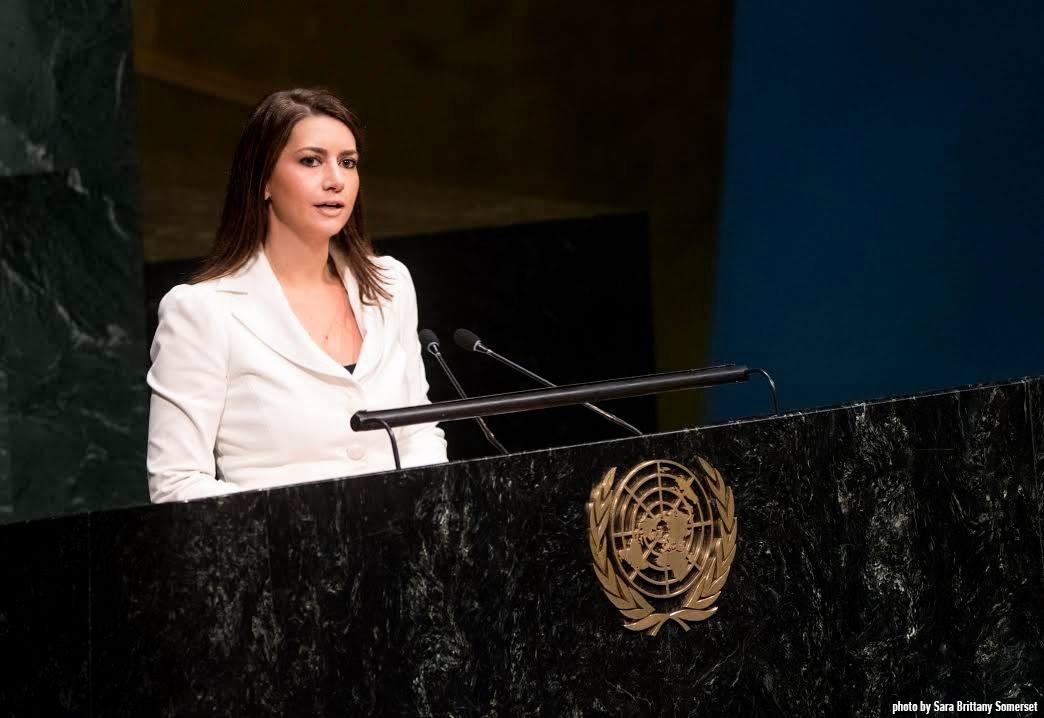 “Our firm specializes in David and Goliath type of international law cases and we tend to represent the Davids of the world,” she says.  Her firm ensures the voices of some of those “Davids” – be it countries or individuals – are heard and their rights protected.

Christina’s work has taken her around the world representing clients before various international courts and tribunals – from Paris, The Hague, London, Hong Kong, Milan, Stockholm, and Vienna to throughout the United States – in some of the most complex and significant matters. Among them, the matters have involved Bangladesh, Bulgaria, Chile, Georgia, Greece, Guyana, Korea, Mauritius, Uzbekistan, Somalia, and Uganda, among others.

Just last year, Christina was on the team of Foley Hoag attorneys representing the Republic of Mauritius before the International Court of Justice – the United Nation’s court in The Hague – regarding whether the decolonization of Mauritius was lawfully completed when the United Kingdom excised the Chagos Archipelago from Mauritius and established a military base prior to its independence. The case has potentially broad-reaching implications and received a significant press coverage as many countries continue to grapple with the consequences of colonialism, including Cyprus. A judgment is expected early in 2019.

Christina has also worked on other matters of great importance in Greece and Cyprus. She represents Greece’s state-owned gas company in a series of disputes against Turkey’s state-owned entity relating to a gas sales and purchase agreement that arose from the Greece-Turkey Interconnector Pipeline – a pipeline connecting the countries’ gas systems that was aimed at encouraging “energy diplomacy” between them. The dispute relates to price revision requests to adjust the gas prices in light of changes to market pricing in Western Europe.

In these challenging times, international law is an important alternative for States to resolve disputes.  “It facilitates the specific settlement of disputes between the States, promoting the rule of law and compliance with human rights principals. It also creates a more predictable environment for businesses in an increasingly globalized economy.”

Additionally, for over four years, Christina has served as Cyprus’ external legal adviser on matters before the United Nations. She has served in this role on a pro bono basis because of her desire to assist Cyprus in bolstering its position before the UN.

Christina’s expertise in international law and position at prominent law firms have allowed her to successfully represent survivors of torture against their perpetrators before US courts. One such case involved the famous Latin American songwriter, Victor Jara, who was tortured and killed under the Pinochet dictatorship in Chile in 1973 because of the political nature of his influential music.  Christina represented Jara’s family in a civil action against Jara’s alleged killer – a former Lieutenant under General Pinochet – who had since become a U.S. citizen living in Florida.  Through a series of field visits to Chile interviewing and deposing former military conscripts, Christina was able to establish the lieutenant’s command responsibility for the torture and execution of Jara. In 2016, a jury found him liable for Jara’s killing, awarding $28 million in damages to Jara’s widow and two daughters. Christina also successfully represented Somali professor of constitutional law, Abukar Hassan Ahmed, who was brutally tortured in the 1980s by the then-Siade Barre dictatorship in Somalia because of his political beliefs. Through her investigation of the crimes, which spanned from London, Brussel, and Italy, to Columbus, Ohio, Hioureas lead the case against a former Somali Colonel responsible who ordered the torture of Professor Ahmed. The case resulted in a $15 million judgment. In 2013, Hioureas was awarded the Center for Justice & Accountability’s “Partner in Justice Award” for her work on the case and that same year, Professor Ahmed was bestowed with the International Bar Association “Human Rights Award” for his courage and dedication to the rule of law.

“These cases are incredibly moving. Working with survivors to tell their stories before a court of law allows them to regain some of the control over their lives that they had lost because of these atrocities. At the same time, the cases help governments work to close an ugly chapter in their histories,” Hioureas says.

Her career began at a large Wall Street firm, Simpson Thacher & Bartlett LLP where she practiced commercial arbitration and securities litigation. She then moved to London to specialize in international law at Latham & Watkins LLP. But she returned to the United States, eventually joining Foley Hoag LLP, at the urging of a Greek colleague, Dr. Constantinos Salonidis – now a Partner at the firm, who was working in the firm’s Washington, D.C. office.

“Public international law is a highly specialized area of law and it happens that at our firm we have two Greeks in this niche practice,” she says.

The two met at a conference about 10 years back and have been friends and colleagues ever since. Now at the same law firm, they often collaborate on cases and advisory matters. Before joining Foley Hoag, Constantinos was a fellow on public international law for the Academy of Athens, Bureau of International and Constitutional Institutions, and the Greek Ministry of Foreign Affairs.

Christina was born and raised in a small beach town in Orange County, California. Her father is from Neohori, a village outside of Kalamata, Greece and her mother is from Argos, Greece. They came to the United States in 1970.

“Like many immigrants pursuing the American Dream, my family has a humble background. Through their hard work and perseverance, my parents ended up running a successful restaurant and eventually became involved in real estate development in California,” she says.

She grew up in a strong Greek household and is active in various Greek organizations that promote Greek culture, such as the Hellenic American Cultural Foundation. “Our culture is very special—our history, our music, our traditional folk dancing, and our rich language—gives us a lot to be proud of.”

Additionally, at the request of the Greek Orthodox Archdiocese of America, she serves on the board of directors of the Tannenbaum Center for Interreligious Understanding.  The organization promotes religious tolerance, which includes working to protect Orthodox Christians and their churches around the world. “Christians continue to be persecuted and churches desecrated, so I work with organizations to raise awareness and seek legal solutions,” she says.

Christina is newly married to another Greek-American attorney, Evangelos Michailidis, a partner at the Duane Morris law firm, who practices commercial litigation and business disputes.