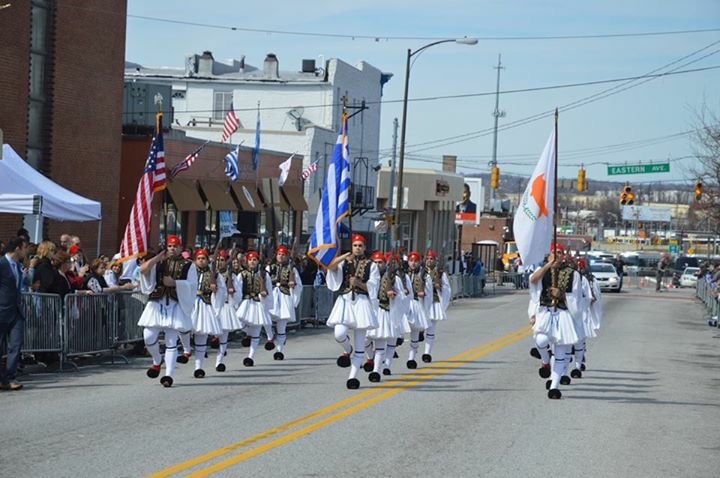 By Joanne Trikoulis,  Special to The Hellenic News of America

The color of the Baltimore skies on April 2, 2017 were just the perfect shades of the Greek National colors, blue and white as  Greektown hosted the Maryland Greek Independence Day Parade.

Celebrations began with the reverent Doxology at the St. Nicholas Greek Orthodox Church of Baltimore in the presence of the Evzones, the honorary guests and dignitaries of both the Greek and Cypriot Embassies as well as local and state officials, followed by a beautiful luncheon hosted by Xenos Kohilas at Ikaros Restaurant.

Meanwhile, proud Greek-Americans and spectators from all over Maryland, Washington D.C., Virginia and even as south as North Carolina gathered along the streets of Baltimore’s Greektown celebrate their ancestor’s sacrifices in preserving the ideals of Freedom and Democracy. They were there to witness the pride of so many of the Greek youth marching to showcase their Greek Heritage, its rich and ever so significant history and the great ideals passed on and shared with the rest of the world.

The ceremonies began with prayer by Archimandrite Nektarios Cottros, followed by the Greek National Anthem and the National Anthem of the United States of America sung by Stefanos Niktas and Maria Pearce, respectively. With the beautiful melodious sounds of the Hellenic Philharmonic Society Band of New York under the direction of Spiros Svolakos in the background, spectators watched, choking back tears of Greek pride  as the parade began making its way through the streets of Greektown led by this year’s Grand Marshal, Former Baltimore City Councilman and Maryland State Senator Perry Sfikas.

The groups, which included the Greek Schools, Dance Troupes and parish members from over a dozen Greek Orthodox Churches of Maryland, Washington DC and Virginia were dressed in their ethnic costumes and the coveted colors, blue and white, waving their Greek flags. Representatives of chapters of the AHEPA and Daughters of Penelope along with the many societies of various regions and islands of Greece also participated in displaying their pride in their heritage.

Especially beautiful were this year’s floats, which included the “ΚRIFO SHOLIO” re-enacting the underground secret schools attended by the Greek children, enslaved under Ottoman rule, along with the float of  “KLEFTES & ARMATOLI” paying homage to the hidden and the heroic soldiers who provided “insider” information to the Greek armies, which led to the victory of the war of 1821 and Greek Independence. Following close behind, George Lagadinos, dressed as the iconic heroic figure of 1821, General Thodoros Kolokotronis, turned to salute the clergy, military attachés and dignitaries, as did the beautiful white horse he gallantly rode on, compliments of the great patrons of the parade, the Korologos Brothers, leaving everyone in awe.

There were also the living history groups such as the “Myrmidons” from Pennsylvania illustrated the revered skill of the mighty warriors of Achilles as well as the “Epilektoi Hoplitai” who portrayed and reconstructed with historical accuracy the clothing, equipment and fighting skills of the ancient Greeks Hoplitai.

The epilogue of the Parade was the somber march of a group of young men from Maryland, who trained for many months under the supervision of Stavros Katsas, who was a Sergeant of the Hellenic Presidential Guard, to offer the spectators a depiction of the ceremonies performed by the historical elite light infantry, also known as the Evzones. The ceremony concluded with the Laying of the Wreaths by Christina Vasilatou, First Secretary of the Embassy of Greece and Konstantinos Polykarpou, Consul of the Embassy of Cyprus, as well as Captain Panagiotis Papanikolaou, Naval Attaché, Lt. Col. Dimosthenis Giannikos, Military Attaché, Major Stefanos Sormas, Lt. Colonel Stefanos Ampouleris, Air Attaché, and Lt. Colonel Apostolos Dontakis of the Embassy of Greece, Baltimore City Mayor Catherine E. Pugh as well a members of the Greek Orthodox Clergy and the Parade Committee.

Finally the “Paul Sarbanes Public Service Award,” was presented by both father and son, Former US State Senator Paul Sarbanes and Maryland Congressman John Sarbanes to this year’s parade committee recipient, Panagiota “Pitsa” Balomas for all her tireless efforts in making such a festive celebration possible. She humbly accepted, but not without acknowledging that the success of the parade could not only be possible by the hard work and dedication of the entire Maryland Greek Independence Day Parade Committee, but with the great attendance enthusiasm of all the participants and spectators as well, as she and fellow Parade Committee member, Co-Chair and Masters of Ceremonies, George A. Stakias bid everyone farewell until next year.