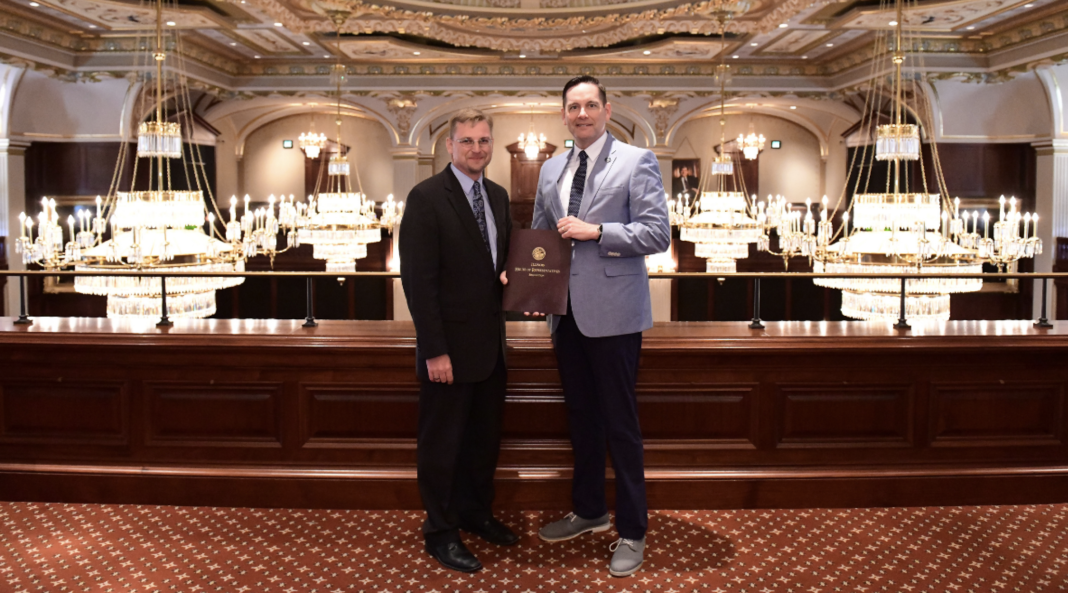 SPRINGFIELD, IL – On May 6, the Illinois State House of Representatives unanimously passed HR0139 which recognizes the historic October 22nd 30th Anniversary of the Elevation of Ecumenical Patriarch Bartholomew of Constantinople, spiritual leader of Eastern Orthodox Christians throughout the world.

“Resolved, by the House of Representatives of the One Hundred Second General Assembly of the State of Illinois, that we declare October 22, 2021 as Ecumenical See of Constantinople Day in order to commemorate the 30th Anniversary of the elevation of Ecumenical Patriarch Bartholomew of Constantinople” HB0139 declares.

The resolution also includes a reconfirmation of their previous calls for the Turkish Government to reopen the historic Halki Seminary, forcibly closed by the Turkish government in 1971. Founded 175 years ago in October of 1844, it was the main school of theology of the Eastern Orthodox Church. Previously the Illinois House passed HR666 in 2007 and the Illinois Senate passed SR0070 in 2013, both of which called on the Turkish Government to reopen Halki along with other provisions to ease restrictions on the worldwide leader of the Eastern Orthodox Church. The Illinois House of Representatives previously reconfirmed HR666 and SR0070 within 2019’s HR0348, which at that time recognized the Ecumenical Patriarch’s 50th Anniversary of Priesthood.

“Resolved, That we recognize the importance to Illinois, the United States, and to the world of Ecumenical Patriarch Bartholomew’s leadership on matters of the environment, peace, and religion and encourage United States foreign policy makers to continue to urge Turkey to grant religious freedom and property rights to the Ecumenical Patriarchate as well as to reopen the Theological School at Halki” the resolution states.

HR0139 was written by John C. Ackerman (R) of Washington, Illinois, who was elected in 2018 Tazewell County Clerk & Recorder of Deeds and is a Greek Orthodox parishioner of All Saints Greek Orthodox Church in Peoria, Illinois. It was sponsored in the Illinois House by Representative Tim Butler (R) of Springfield, Illinois, and Co-Sponsored by Dan Ugaste (R) of St. Charles, Illinois.

“It is my hope and desire that this important statement by the Illinois House of Representatives not only recognizes the historic 30th Anniversary of the Elevation of His All Holiness but also serves as a renewal of public awareness of the stringent restrictions and limitations placed on the Ecumenical Patriarch. His All Holiness may be in the religious minority in the nation he is based in but has a major worldwide impact on Christianity,” said Ackerman, concerning passage of this resolution.

Ecumenical Patriarch Bartholomew is recognized in the United States and abroad as a leader in the quest for world peace, greater religious understanding, and respect for the Earth’s environment. Ecumenical Patriarch Bartholomew enhanced greater religious understanding by initiating a joint declaration stating that it is man’s duty to protect the earth, signed by himself and Pope John Paul II, together the spiritual leaders of nearly one out of every five people in the world.

The Resolution by the Illinois House of Representatives ends with the statement “we express our support for Ecumenical Patriarch Bartholomew’s noble efforts for the betterment of humankind.”

Ackerman stated that he intends to send official copies of HR0139 to the Ecumenical Patriarch with a photo of himself and Representative Butler in the State Capital. He also stated that he has already made arrangements for a similar statement recognizing the Patriarch’s Historic 30th Anniversary and support of Halki to be made by the United States House of Representatives later this year.