Lazarus M. Kirifides, B.S. Pharm., D.O. Doctor of Obstetrics and Gynecology To be honored at the 25th Hermes Expo on Tuesday, April 5, 2016

Greek tourism has proved that it is strong and it constitutes the locomotive of the Greek economy, Tourism Minister Vassilis Kikilias said on Sunday...
Read more
Greece

Special to Hellenic News of America  When you learn a language, you learn about the people who speak it.  Language is a tool to connect...
Read more
Community

"Courtrooms who were brought to the United States by American missionaries from Greece of the Ottoman Empire were probably the 'the pioneers of the...
Read more
Featured

On Sunday, December 19th, The Greek Orthodox Metropolis of New Jersey and the Philotimo Housing Development Corporation organized A Christmas Benefit at the Grand...
Read more 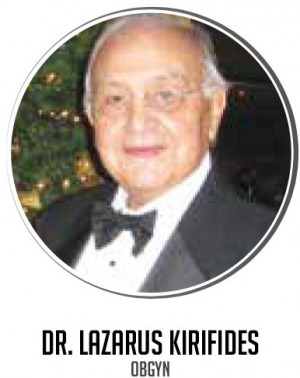 Dr. Lazarus M. Kirifides of Wilmington, Delaware, a physician specializing in Obstetrics and Gynecology, a community leader and a philanthropist was born in New York City. His parents Michael and Maria Protidou Kirifides had emigrated to the United States in 1928 from Pontus, Anatolia and Athens, Greece.

The family moved to Morton, Pennsylvania, whereby, Dr. Kirifides graduated from the Friends Central School and continued his education at the Philadelphia College of Pharmacy and Science receiving his Bachelor of Science in Pharmacy degree in 1953. While working as a pharmacist at Milner’s Apothecary, his interest piqued in medicine. He was accepted to the Philadelphia College of Osteopathic Medicine where he was conferred his medical degree in 1957. He then headed south to Wilmington, Delaware for an internship and residency training in Obstetrics and Gynecology at the Riverside Hospital. Passing his examinations, he became Board Certified and a Fellow in his specialty and obtained staff privileges at the Riverside Hospital, the Wilmington General Hospital, and Christiana Medical Center. He practiced Obstetrics and Gynecology for over 36 years and delivered more than 3,000 babies.

During his medical career, Dr. Kirifides served as Chairman of the Department of Obstetrics and Gynecology and Chief of Staff of Riverside Hospital. He traveled weekly to the medical school in Philadelphia as a Professor to lecture and clinically instruct the medical students in the art of Gynecology. These medical students voted him “Clinical Instructor of the Year” in 1972. In addition, he was a clinical instructor and mentor for the interns at Riverside Hospital.

For Dr. Kirifides, the premise and philosophy of his life has been God, family, education, and community service. His principles were simple. “If you give to the community your time, talent and treasure, the community will give back to you”.

As an active and supportive member of the Orthodox Church and the Hellenic community, Dr. Kirifides is a fulfilled member of Leadership 100 and is a Charter Member and Past President of the Hellenic University Club of Wilmington. He has served as a Board member as well as Vice-president and Secretary of the Holy Trinity Greek Orthodox Church Parish Council in Wilmington and was President of the Order of AHEPA Chapter #95.

Dr. Kirifides’ public service to the community has included participation in the Masonic Order, Gothic Lodge #519, as well as, the Christiana Rotary Club in Newark, Delaware, where he has served as Vice-president and Chaired several fund raisers for the Boys and Girls Club of Delaware and the Salvation Army.

Dr. Kirifides and his wife, the former Helen Michell, a Temple University graduate, have been married for 56 years. They have three sons: Michael, Doctorate in Neuroscience and a Professor at Drexel University, married to Kerry a Pediatrician in Newark, DE; Vasil, an attorney is senior partner of the law firm Schmidt, Kirifides, and Rassias in Media, PA, married to Rita, a former Director of Marketing for a realty firm in Washington, DC; and Alexander, an Obstetrician and Gynecologist in private practice First State Women’s Care in Newark, DE, married to Kathy a dentist practicing in Wilmington, DE. In addition, they have seven grandchildren: Eleni, Lawrence, Maria, Lazarus, Elena, Irene and Ellen.

Previous articleAngelina Jolie visits refugee shelters in Piraeus
Next articleDr. Panagis Galiatsatos bridging the gap between doctors and patients in the Baltimore Community