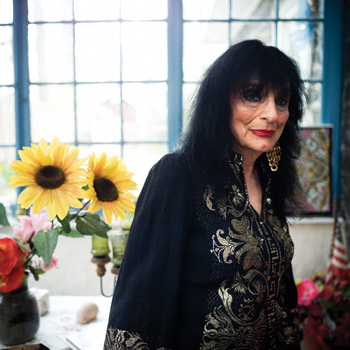 Any review almost seems redundant in light of the Translator’s Afterword, which states: “Eros is the presiding divinity of Lili Bita’s work. The notion of Eros….encompasses but far exceeds individual experience and specific relationships. Lovers are driven to each other by its tidal force, and what they discover is both terrible and exalting….”

In “Eurydice” the narrator says, “….I need force/to crush me/I need savage potions/that turn my veins to whips…./If you are not Orpheus,/O stranger,/you’d better not come to hell.”

Fleshfire defines and explores varied roles of Eros, including a woman who celebrates the necessity for her monthly cycle which mirrors birth, death. In “The Calyx,” a “woman makes love to an eagle.”

Lili Bita’s art is richly imagistic, filled with metaphors as in “Behold the Flesh of the Earth.”

immense in her nudity….

I want my flesh

to become one flesh with the earth….

and as the earth

is gnawed and cradled

by the pleasure of the sea

will take its remorse

to the river of ecstasy.

Actress and author, Lili Bita has performed classical and modern theatre on three continents. (See lilibita.com for details about her recent honors.) No wonder her work speaks to everyone and seems to embrace readers in such a poignant and masterful way.

Cover design by her son Kimon Rethis is a brilliant depiction of the artist as woman on fire with desire. Fleshfire is not merely flames but a conflagration that will burn eternally intense. Lili Bita is a national and international treasure.

(Author of The Planner: shifting the shadows, poem-novel forthcoming in 2016 from Scars Publications)