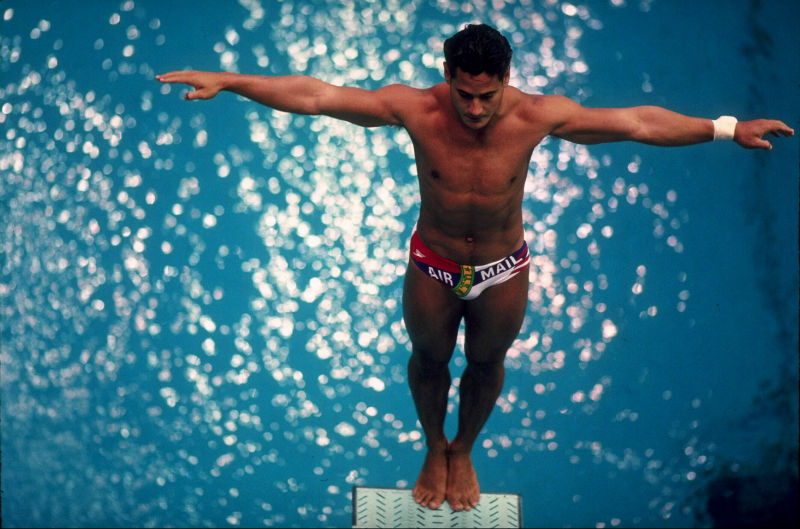 Louganis has been named as the Grand Marshal of 62nd Annual Garden Grove Strawberry Festival’s Parade on May 23, as part of “Celebrating The Olympics.” “That is great. It is very nice to be back in Orange County, I spent so many years there diving, so it’s exciting,” he said.

He is regarded as the “greatest diver” in history. He has won a total of five medals at the Olympic Games, five World Championship titles, as well as 47 U.S. national titles, which is more than any other person in American history. To this day, Louganis’ records are unbroken. “Winning those Olympic medals felt good. I won them over a good chunk of time,” he said.

“I went to my first Olympics in 1976, and I felt like I failed since I came in second place. It was kind of a disappointment but a big motivator as well,” he recalled. “I was ready in 1980, but unfortunately there was a boycott, so I had to wait four years after that. The one that kept me going was my coach Ron O’Brien. Between those years, it was hard to stay motivated, so he gave other goals to look forward to performance goals, a number of national titles and he gave me other things to shoot for, in an effort to stay focused on the performance.”

On the impact of technology on the sport of diving, he said, “There is a lot more emphasis on the degree of difficulty. I was doing some pretty difficult dives back then, but now some of the dives that are done these days are just crazy.”

For young and aspiring divers, he encouraged them to “have fun.” “An athletic career is generally pretty short-lived. Enjoy the journey and the process,” he said. “Realize that diving is much more than just a sport. Athletes have a hard time transitioning since it becomes a part of their identity, and who they are. Athletes are incredible people with incredible drive and commitment. There is so much more to them than just this sport.”

Louganis also opened up about his Greek heritage. “I was adopted by Peter and Frances Louganis. My father is Greek and mother is Scotch-Irish. My sister and I were raised in the Greek Orthodox Church, so we went to Greek festivals and I danced with a Greek dance company and we performed. I am also learning about my Polynesian heritage, my biological one.”

“I spoke in Athens at the Hellenic American University. I spoke about HIV/AIDS awareness. It was really wonderful. The people were warm, loving and very sweet there,” he said.

He is a big fan of the Greek cuisine and he cooks such Greek dishes as moussaka, and spanakopita, among others. “I also make great baklava,” he said.

Louganis served as the dive master in the American TV series, Splash, where Steve Foley and David Boudia were the judges. “It was a lot of fun,” he admitted.

He shared that the best advice that he was ever given came from an acting coach who told him “you are enough.”

On the title of the current chapter of his life, he said, “I just turned 60. I celebrated my birthday on January 29. This year, has been a lot about reflection and appreciation.”

He defined the word success as “compassion.”

To learn more about four-time Olympic gold medalist diver Greg Louganis, check out his official homepage and his Facebook page.

Adam Gregory, ex-Thomas Forrester on ‘The Bold and The Beautiful,’ opens up about his latest projects