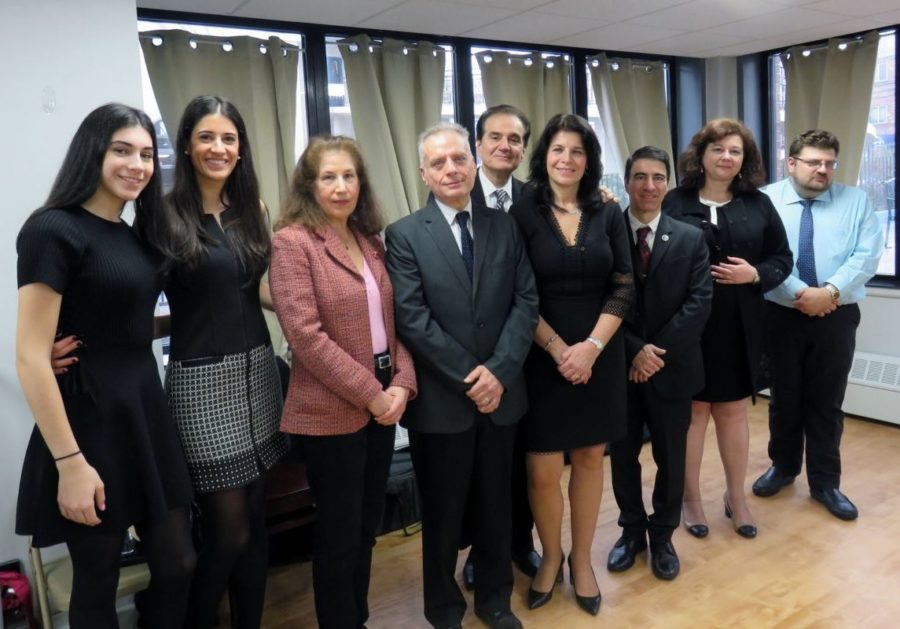 The Greek Teacher’s Association “Prometheus” in cooperation with the Hellenic News of America held an event in honor of the late educator Constantine Parthenis, first President in 1975, on Sunday, February 11th at St. Catherine’s Church, Astoria, New York. A memorial service at the church was followed with a reception in St. Catherine’s Church hall. The event was held in conjunction with the celebration of “The Three Hierarchs, Fathers of Greek Education” and “International Greek Language Day” on February 9th. An exceptional education program followed with a luncheon in Memory of the late Barbara Triantafillou, spouse of President Demosthenes Triantafillou.

“Mr. Constantine Parthenis worked for the advancement of the cultural and educational life of the Greek-American community,” explained Prof. Alexander Colombos. “He was the first President of ‘Prometheus’. He served as Principal of the Department of Education of St. Demetrios Greek Parochial School and the Greek Afternoon School of Astoria. Mr. Parthenis educated students who have distinguished themselves in American society.” Education Consul Dr. Thalia Chatzigiannoglou believes “he helped the children of Astoria learn Greek well, remembering their Greek heritage.”

Director Maria Makedon “I worked with Mr. Parthenis for many years seeing him build the curriculum of the Greek parochial schools with devotion and an outstanding degree of professionalism.” President Triantafillou said “2017 workshop series for Teachers of the Greek Language were held at St. Nicholas Greek Orthodox Church in Flushing, New York and the Ascension School in Fairview, New Jersey through the cooperation of Director Maria Makedon and Dr. Thalia Chatzigiannoglou, Education Counselor of the York. This Pedagogical Program was the child of our proposal at our 40th Honorary Luncheon of PROMETHEUS. The Program of Mrs. Makedon has been inspired by the PROMETHEUS proposals and the Program at the Ascension School in Fairview.

PROMETHEUS has opened new educational horizons for Pedagogical Programs, to meet the professional needs of the Greek Teachers. PROMETHEUS will continue with its vision to solve problems and to benefit the Members of PROMETHEUS. Dr. Chatzigiannoglou is the best Greek Education counselor in my memory, who donated her services for free for this program.” She is continuing the work of her outstanding predecessor, Eleni Karageorgiou, former coordinator of Greek Education of the Greek Consulate of the City of New York. Mrs. Karageorgiou brought spring and rebirth to a position stagnated by “Old World” practices.

Mr. Paul Kotrotsios believed it was an honor “to participate in a program honoring an educator who promoted the learning of the Greek language and Greek news media.” The Founder/Publisher of the Hellenic News of America and Hermes Expo has worked with President Triantafillou to sponsor unique education and culture events during the 2017-18 school year.

Keynote speaker Very Rev. Antonopoulos explained “I worked with educator Parthenis from the 1970’s, seeing him mold our Greek-American youth. Long Live his Memory.” Very Rev. Antonopoulos has written three books on the Greek Orthodox Churches of Astoria, New York. Mr. Timoleon Kokkinos, retired principal of the Greek Department of St. Demetrios of Astoria Greek Parochial School, said “Mr. Parthenis worked with dedication to teach his students Greek. Everyone learned because of his high standards, not only for the students but himself.”

Mr. Dimitrios Kontolios explained “Mr. Parthenis was known as ‘The Teacher’ in Chios. He was tough, stern and everyone had respect for him. He worked tirelessly for the Panchiaki newspaper ‘Chiaka Nea’.”

“Mr. Parthenis was one of the great Greek-American educators,” stated Prometheus President Demosthenes Triantafillou. “He was instrumental, along with Mr. Timoleon Kokkinos, in helping me build St. Demetrios High School in New York. His Children and grandchildren are here today with us. His great strength was his family, who supported him in all his projects.”

“Today, Mrs. Anna Sakkis, is presenting the Ellinopoula.com internet program that is universally hailed as the new way of teaching modern Greek through entertainment,” said Publisher Kotrotsios. “Technology has changed the way people learn and access the Greek language. Children can successfully master Greek by using the online tools of Ellinopoula.com.” Mrs. Sakkis explained “www.ellinopoula.com has spent endless hours of work to keep people united to the common cause of the Greek language and Hellenism. We appreciate President Triantafillou, the Prometheus Board and members who are working tirelessly towards this goal. United we can re-awaken this spirit to the new generation of Greek children. Inspire them to love and embrace our beautiful language, timeless history, and rich culture.” 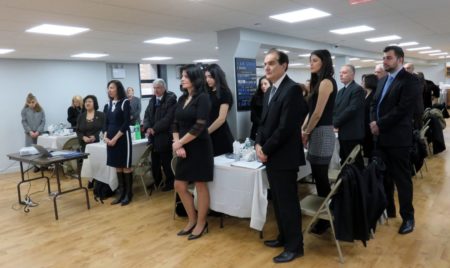 President Triantafillou expressed his “appreciation of your (Mrs. Sakkis’) magnificent work for Hellenism. What a wonderful presentation of a promising new program of learning Greek!  The general testimony of all the attendees to the Prometheus Event today was an exuberant affirmation of the excellent work you have initiated with your program of Ellinopoula.com website!  As the President of the Prometheus Board, I am expressing their deep appreciation to you for your presentation and for your contribution of the $ 500.00 to the recently founded Greek Teachers Pension Fund. Hellenism is getting stronger in America with people like you who have vision and a moral commitment to the support of the Greek Teachers.

May your example of generosity, understanding, and vision be followed by other Greek Americans.” An unforgettable event commemorating Modern Greek language studies in America. For more information on the life of the late Constantine Parthenis, visit the included links.