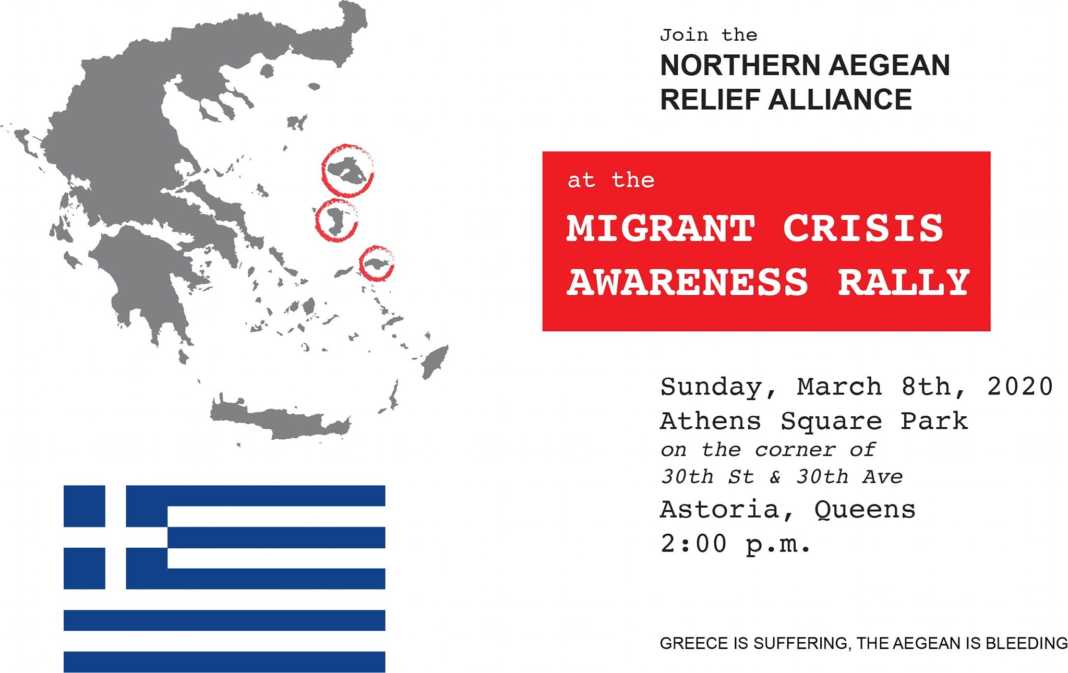 Astoria, NY – March 2, 2020 – A rally to raise awareness about the plight of migrants awaiting asylum on the Greek islands and to show solidarity with island residents will be held Sunday, March 8 at 2pm in Athens Square Park on the corner of 30th Avenue/30th Street in the Astoria section of Queens in New York City. The event is planned by the Northern Aegean Relief Alliance, an organization dedicated to finding a democratic solution for the Greek humanitarian crisis that takes into account the will of the Greek people.

Since 2015, refugees fleeing Syria have been pouring onto the Greek islands, originally seen as a temporary haven until their asylum papers were processed and relocation could be arranged. Since then, however, the situation has deteriorated significantly. According to the Greek government’s most recent figures, more than 27,000 women, men, and children are living in camps designed for 4,500.

“This is a tragedy for the refugees who are living under deplorable conditions in camps and makeshift tents and also for island residents who originally welcomed them with open arms, but who are increasingly the victims of violence, theft, arson, and riots carried out by the migrants,” said John Kontolios, a spokesperson for the organization. “The influx of migrants is also straining the islands’ infrastructure. Greece is reaching a breaking point while the rest of the world does nothing.”

The UN High Commissioner for Refugees, Filippo Grandi has called for urgent action to address the increasingly desperate situation on Greek islands including Chios, Lesvos, and Samos. “Action is needed to address the understandable concerns of the local communities hosting the refugees and migrants, to avoid social tensions rising still further,” he says. Among the things he has called for is greater involvement by the European Union to share the burden now being shouldered almost exclusively by Greece, which has been struggling since 2010 to overcome a potentially existential economic crisis.

“Most of the world, including Americans—even Greek-Americans—do not realize the extent of this tragedy,” says Mr. Kontolios. “It is our hope that this rally will call attention to the plight of all concerned before irreparable damage is done to the Greek islands and their way of life.”

Total number of refugees estimated at 40,750

1,300,000 refugees and migrants passed through Evros, Lesvos, Chios, Samos, Leros, Kalimnos, Kos, Symi, Rhodes, Kastelorizo. All these islands and Evros has a population of approximately 500,000