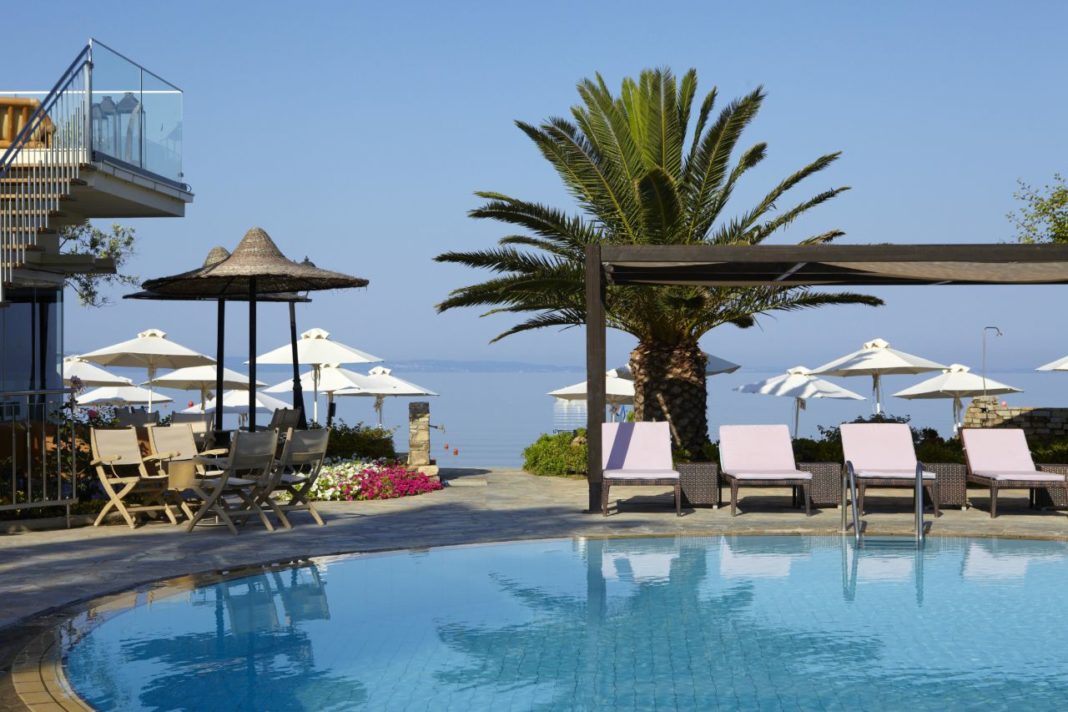 “Suddenly, at my bedside,

My room at the Anthemus Sea Beach Resort was actually a suite with a whirlpool, walk in shower, large living, dining room, and my very own private swimming pool near the patio, reached through a floor to ceiling glass door.  And each morning I was awakened by Dawn, standing by my bedside, wearing golden sandals.

Anthemus was my only stop on the lovely Elia Coast, on Sithonia, the second peninsula in Halkiidiki, Northern Greece.  It is noted for its Oriental Spa, named one of the world’s best by HolidayCheck, a leading travel website. During my stay there I luxuriated in the distinctive spa services and relaxed in a suite with my own whirlpool and swimming pool.  When I walked into my suite, I knew that the gods had smiled upon me.

It was an easy drive from Kassandra to Sithonia.  The views of the countryside do not prepare you for the beauty that greets you once you pull off the main road at your destination.  I was greeted by a gurgling fountain marking the gateway to a very special oasis within.

Anthemus rests on a picturesque bay next to a very long sandy beach and offers desirable seclusion for a most relaxing and rejuvenating holiday.  There are 202 rooms and suites available for singles, couples, and families, all aesthetically pleasing. Guests have the choice of accommodations with a balcony or a veranda that provides direct access to a garden, and all rooms have breathtaking views of the sea or pinewoods.  It is a hidden paradise. 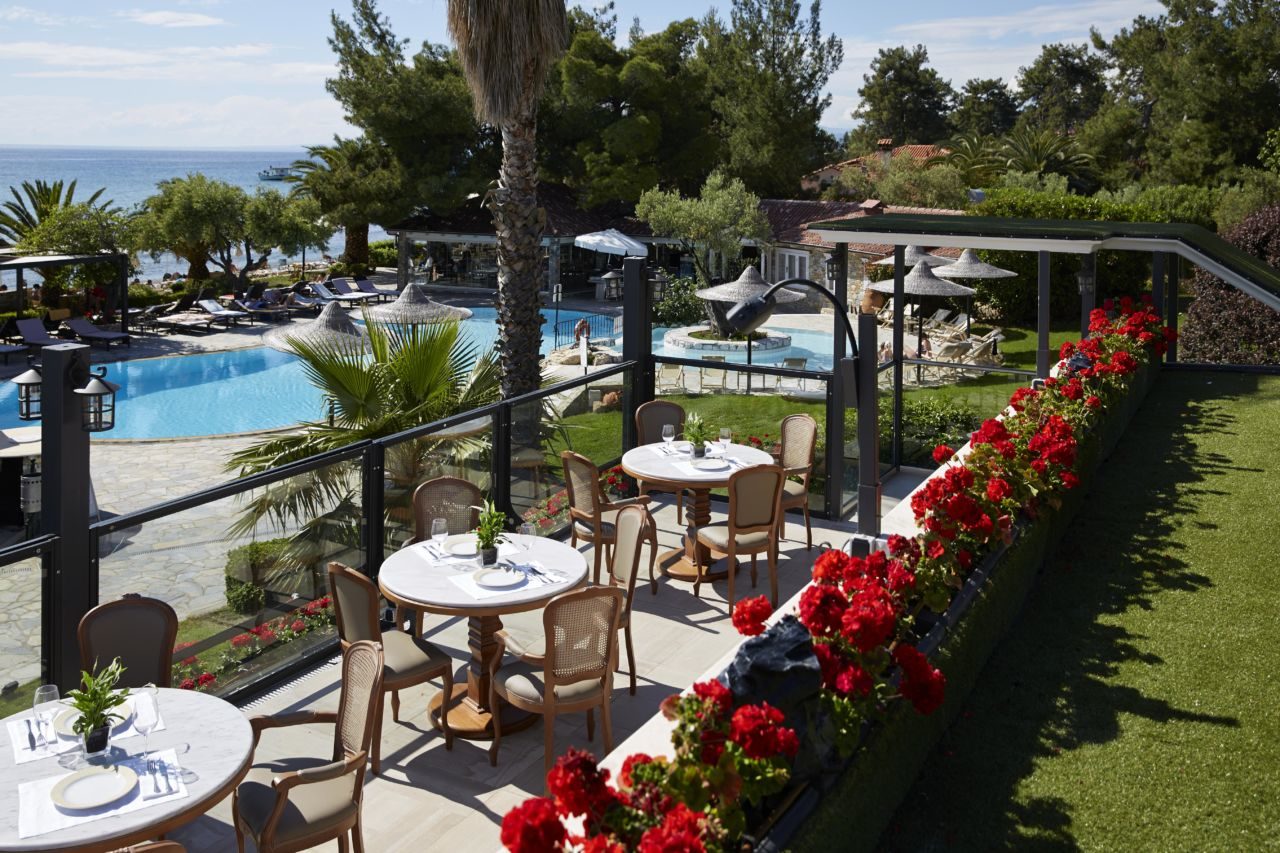 There is not one, but three outdoor pools, including one for children, and one has an integrated Jacuzzi.  If you choose to swim indoors, you will find a heated pool and a most unusual pool in a “cave room.” For guests who are invigorated by athletic activities, you can go scuba diving, play beach volleyball, work out in the fitness center, play golf, or go mountain biking or hiking. I chose to be sedentary and indulged myself in the oriental spa services.

Many people come to the Anthemus Sea Beach Hotel for the spa services because they are distinctively oriental and designed to promote relaxation and rejuvenation.  How could one not be rejuvenated after a swim in the fresh water spool, a whirlpool soak with a jet massage, an hour long Lotus Harmony Massage by two therapists, a foot reflexology treatment, finished with a nap on a relaxing bed?  It was a treat to be so pampered in the hands of these expertly trained relaxation therapists. 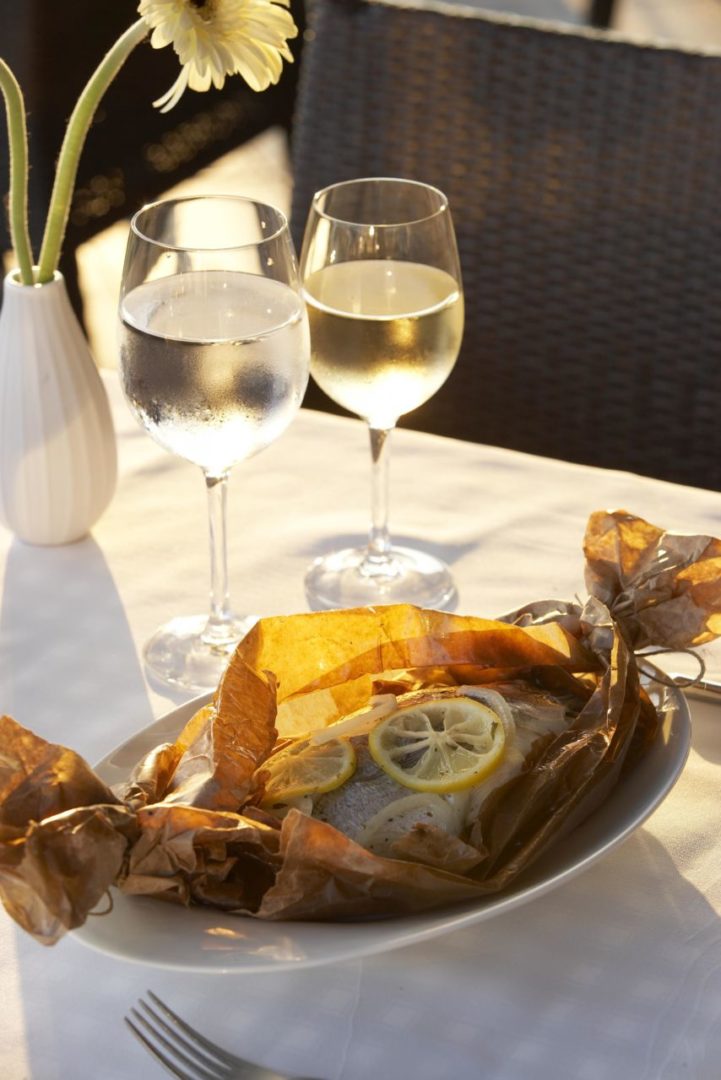 The choice between using my private pool and the beach was difficult, but I solved this by going to the beach in the afternoon and enjoying my pool in the evening when the music was soft and the lights dim. One evening I ordered a snack and it was delivered to the patio at poolside.  Bliss.

Anthems’ personable sales manager, Sakis Gililoudis, was my host for a sumptuous dinner on the Roof Garden Restaurant especially prepared for us by Euripides Tzinopoulos, Executive Chef, who chose our menu for us at Mr. Gililoudis’ request.  My entrée was a grilled sea bass that was the most flavorful I have ever enjoyed, pared with grilled vegetables and freshly baked bread. A glass of excellent white chardonnay completed the meal.

The following menu was prepared for us from chef Evripidis:

Grilled black cod with mirin and miso (for you)

Shank from lamb with mint sauce and wine by Livadiotis (merlot-cabernet), bulgur wheat and mirepoix of vegetables (for me)

The hotel opened in 1992 with sixty rooms and during the past decade, additional rooms were added for a total of two hundred and two.  The largest percentage of guests—forty—come from Germany, fifteen per cent each are from Russia and the Balkan countries, and the rest are from Greece, the U.K., Scandinavia, and western Europe.  Mr. Gililoudis estimated that there are ten to twelve flights daily between Germany and the Makedonia Airport in Thessaloniki, four or five from Russia, and three or four from England. The Makedonia airport is and easy ninety-five kilometer drive from the hotel.

If you are from the States and mistake the Anthemus Sea Beach Hotel and Spa for The Hamptons, the south fork of New York’s Long Island, you will be forgiven.  Both are highly desirable locations distinguished by luxury, elegance, and serenity. They are so similar in atmosphere and amenities that the Anthemus Sea Beach Hotel could well be called “The Hamptons of Halkidiki.”