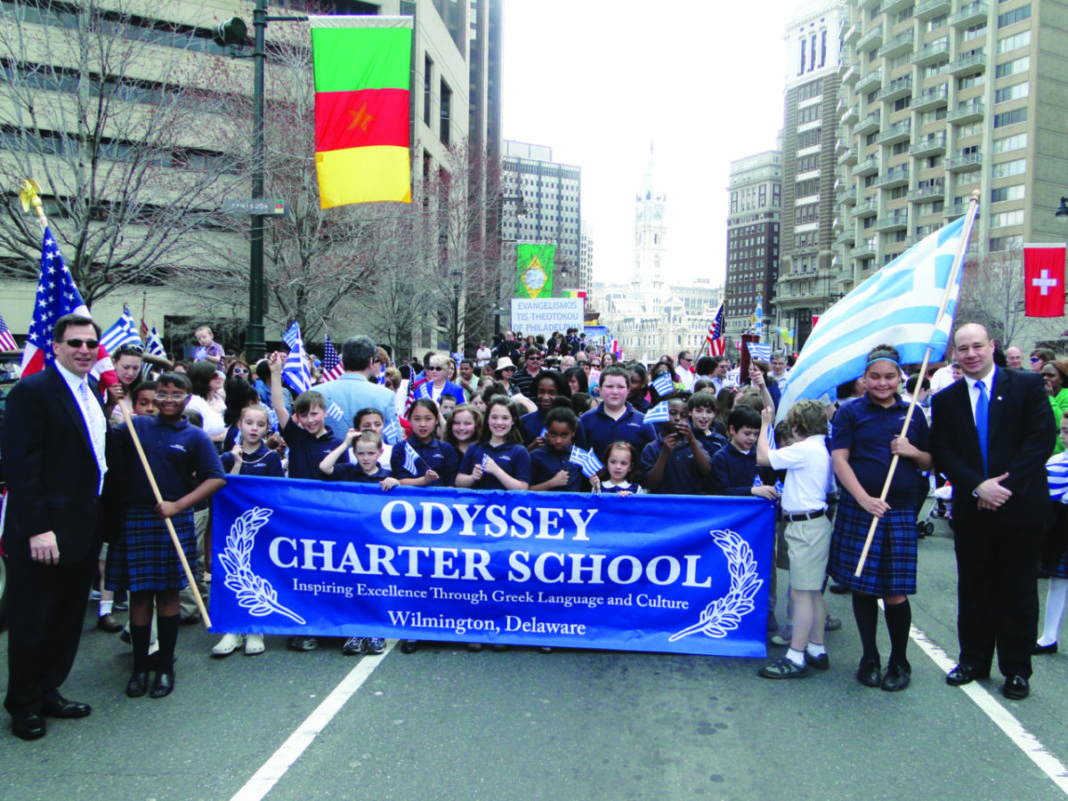 Wilmington, DE The 10th Anniversary of the Odyssey Charter School in Wilmington, coincides with the Games of the XXXI Olympiad. Each year, the school celebrates its anniversary with a 5k Walk/Run. This year, with the expansion of the Barley Mill Campus, the school will be commemorating these milestones by celebrating the true Olympic Spirit in collaboration with the Municipality of Ancient Olympia and its schools and the Greek Olympic Committee. This outstanding and unique event will take place on Saturday, September 24th beginning at 10am with the formal presentation followed by the 5k Walk/Run at noon. The groundwork for the festivities was laid earlier this year in Ancient Olympia when the Mayor gifted an authentic Olympic Torch, used for the 2004 Athens Games, to the school. Additionally, an agreement was reached for the “twinning” of Elementary, Middle, and High Schools in Ancient Olympia with the Odyssey Charter School, essentially creating sister schools. As part of the Anniversary Celebration, students from Ancient Olympia will be creating wreaths made using the branches from the sacred olive groves of Ancient Olympia. In the tradition of the modern Olympic Games, an Olympic Flame will be created for this event, PRESS RELEASE Wilmington Chapter #95 808 N. Broom Street | Wilmington, DE 19806 travel through parts of Greece, including the Panathenaic Stadium and the Acropolis in Athens, ultimately arriving in Wilmington. The Olympic Flame symbolizes peace, unity, friendship, respect, excellence, fair play, and joy in competition. The wreaths and the Flame will be delivered to dignitaries in Wilmington by Olympians from the 2016 Greek Olympic team. The events of September 24th will begin with a “Parade of Nations” by students of the Odyssey Charter School at 10am. A brief documentary of the preparatory events will debut followed by the arrival of the Greek Olympians bringing the Olympic Flame and wreaths to the campus. Honored dignitaries will light the Odyssey Olympic Cauldron using torches from the Athens 2004 Games and from the original relay of the 1936 Berlin Games. This will be followed by the singing of the United States and Greek National Anthems and the Olympic Hymn as well as a special musical recital. The official dedication of the Barley Mill Campus and the formal implementation of the “twinning” of the Odyssey Charter School with its sister schools in Ancient Olympia will cap the festivities, leading to the 5k Walk/Run, where winners will be awarded the wreaths created from the sacred olive groves of Ancient Olympia. ###

The Order of AHEPA (American Hellenic Educational Progressive Association) was founded in 1922 in Atlanta, Georgia. Its mission is to promote the ancient Greek ideals of Education, Philanthropy, Civic Responsibility, and Family and Individual Excellence through community service and volunteerism. Wilmington Chapter #95, instituted on February 14, 1926, was the driving force behind the creation of the Odyssey Charter School and has included among its members, US Senators J. Caleb Boggs and William V. Roth of Delaware.

The Odyssey Charter School’s mission is to prepare students for a lifelong enthusiasm for learning, to develop a keen awareness of world citizenship and culture, and to establish critical thinking and problem-solving proficiency through the added learning of the Modern Greek language and mathematics focus.

Previous articleWE STARTED WITH VICTORIES, WE MAY END UP WITH ANNEXATION
Next article73 ΧΡΟΝΙΑ ΑΠΟ ΤΟΝ ΘΑΝΑΤΟ ΤΟΥ ΚΩΣΤΗΣ ΠΑΛΑΜΑΣ (1859-1943)