OLD KARDAMYLI, THE KAPATANIO AND THE MARCH THAT SPARKED THE 1821 WAR OF INDEPENDENCE 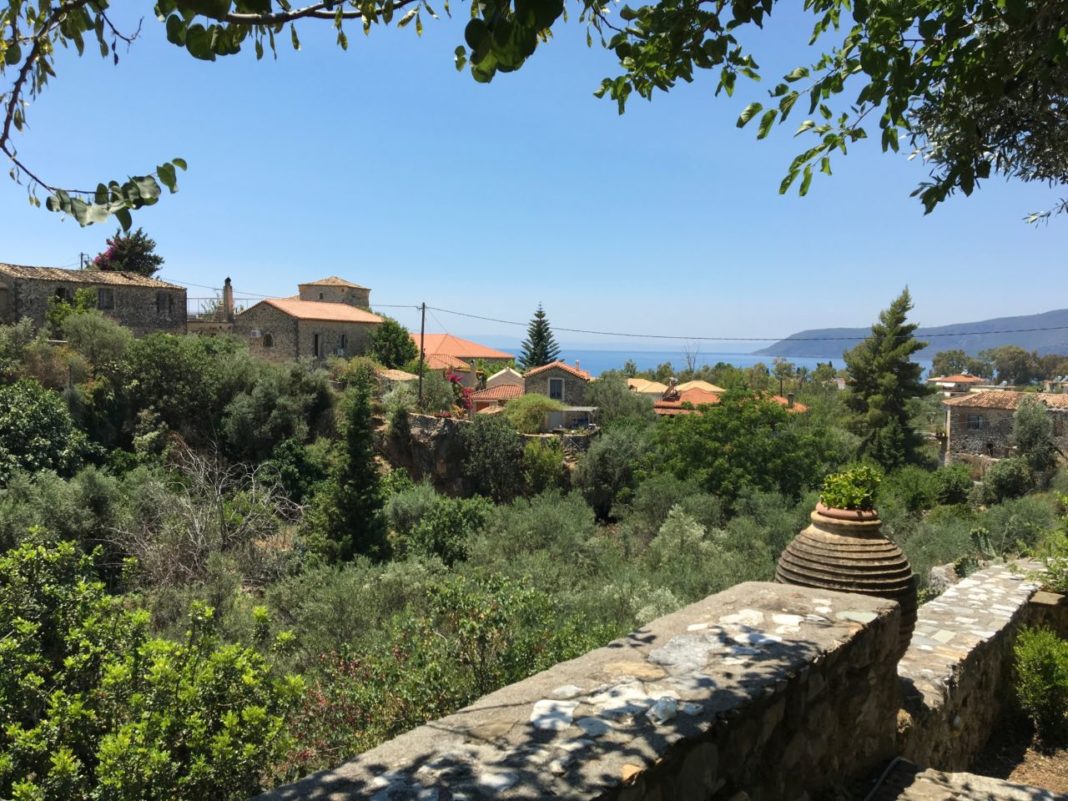 Resident of Kardamyli and Fulbright Scholar

Kardamyli, a small Village with a claim to being over 3,000 years old and hidden in a remote area of the Southern Peloponnese, has many tantalizing secrets.  They reveal themselves, however, to the curious pilgrim who dares to explore.

One discovery can be found at the top of the bumpy, unpaved, winding road that begins behind the town’s plateia (main square) and ends on a plateau where one of the most beautiful views of Kardamyli can be found.   Traveling a short distance by foot or by car to the summit, the visitor then enters a world not much different today from what it was in the late 1600’s until the end of the  1700’s.   Except then it was a Venetian stronghold—a Byzantine enclave in the form of a walled village.  It is called “Old Kardamyli” and was the site of the famous march that historians say ignited the 1821 War of Independence.

I was the guest of Stavros Petreas, who has ties to the history of this special place.  He is the owner of a secluded restaurant in Old Kardamyli where tables shaded by long-hanging trees are spread over a plateau offering views of homes scattered over the hilltop.  It is remote and tranquil and one hears only the peaceful sounds of nature.  It is a short walk to the center of town, but the pathway is unpaved. I found that it was worth the journey up the winding road, because I was treated not only a to a superb lunch, but also a history lesson.

But first we set our scene:  Not much has changed from the time when it was a Venetian stronghold.  Agios Spyridon, a sturdy stone church of elegantly simple lines,  has pride of place in the center of the courtyard.  Behind the church is the Mourtzino tower, where, in past centuries, sentries positioned themselves while on the lookout for invaders.  A marble  plaque, created and donated by “Panayioti the Troupaki,” marks the spot where a precious spring, long since dry, was the watering hole for the public. And at a distance from the courtyard three stone buildings, formerly used for shelter,  storage, and the making of olive oil, have been refurbished. The restaurant is in one of those three buildings.

About twenty years ago, Mr. Petreas began the renovations that created  a hilltop oasis; to my eyes, it is one of the most desirable and peaceful places to stay in Kardamyli.  In three separate structures, the visitor will find a seven-room hotel in the dwelling that once was used as an olive press, turned by a donkey; a restaurant that underwent extensive renovation and where everything is prepared with fresh, local ingredients by Miss Anna, a superb cook; and a building with three apartments—one for Mr. Petreas, the second for his cook, and the third for friends of the family.

Mr. Petreas explained that the buildings  do not look much different than they did when “Old Kardamyli” was re- settled  by Mikhail Paleologho Troupaki, who came to Kardamyli from Andhrouvista in 1690.  My host is taking me back in time.  Mr. Petreas, whose name was originally Troupaki,   tells me he is a fourth or fifth generation descendant of Mr.  Troupaki, from Limeni, who became “The Kapitanio,” the leader of a band of men whose assembled in Kardamyli to make that famous march.

To prepare for my visit with Mr. Petreas, I read From the Edge of Greece Space, a fascinating book on The Mani written by Mariekaty Athanasea Georgota, a current resident of Kardamyli and a Fulbright scholar, and her friend, Professor Emeritus Frederick Osmond Gearing, an anthropologist from The State University of New York at Buffalo.

A chapter in this book is devoted to the 1821 War of Independence.  I am not quoting verbatim, but have attempted to condense the chapter on Kardamyli.  The authors explain:

“From the late 1600’s until the end of the  1700’s,   the area was under a special co-existence with Turkey.  The people paid taxes, but were not involved with the government.  The people of Mani resisted and Mikhail Paleologho became a leader—a Kapitano.  He joined others,  Petrobey Mocvromichali, from Limeni, Mourtzino Troupaki from Kardamyli,  and a man named Yhrighoraki, from Aeropoli, to lead bands of fiercely brave men to march to Kalamata and ignite the War of Independence.

“The leaders—the Kapetanios—emerged in the villages and Mourtzino Troupaki of the village of Kardamyli, became  the strong man and was named Bey. In the beginning, there was a standoff between Troupaki and Yhrighoraki, the Kapitano from Aeropoli, and Petrobey Mocvromichali from Limeni, but eventually they came together and formed an alliance. The agreement they signed on October 1, 1819, however, set the stage for the war.  They, and other Kapitanios, became members of Filiki Eteria (Brotherhood of Friends), a secret society which started abroad  with the goal to  liberate Greece from Turkey

“Kardamyli as we know it today began to take shape by 1770. The tower was built first, the spring was functional and a plaque placed there in 1734, and the church was completed in 1750.  Construction of the wall occurred between 1805 and 1818, and by the early 1800’s there was a slow development of the building of other homes in Kato  Kardamyli, “lower Kardamyli,” which happened outside the walls. The people never really left lower Kardamyli.  They went up to the mountains for safety, but always returned. And—they formed Andhrouvista, a group of villages. Between 1910 and 1920, however, people started moving down from the hills, building homes closer to the sea and creating the development of the village of Kardamyli.

“In 1770, a revolt against the Turks was set in motion by the Russians, but they were defeated and left, and then the area, including Kardamyli was under a special deal with the Turks, for about fifty long years.  They paid taxes, but Turks were not allowed in the area. During this time, Kardamyli grew stronger and Andhrouvista weaker with the result that it dissolved into smaller villages.

“On March 22, 1821 more than 7,000 men from the outer villages assembled in the courtyard of Agio Spiridhorn; this included 700 from Kardamyli.  The next day, March 23, they marched to Kalamata, picking up new recruits along the way, and liberated Kalamata.   The War of Independence was fought on different dates in various areas of Greece, hence the various dates for its celebration.  In the ManI area, it is celebrated on March 23.”

I speak some Greek, but am not fluent, so Mr. Petreas and I spoke with the help of a mutual friend, Alexandros Koutsos, Manager of  View Travel, a tourist agency in town,  who served as a translator. My host elaborated on the history of the area that I read in From the Edge of Greece Space and added a few facts.  He said the story of the march from Kardamyli to Kalamata has been passed down orally from generation to generation and that some tourists will visit for the expressed purpose of seeing where the men assembled and then marched. He expressed pride in being a descendant of Mikhail Paleologho Troupaki, the leader of the Kapitanios.  Then he revealed an interesting genealogical fact:  Mikhail Paleologhois, the other Kapetanio,  was a descendant of Constantine XI Dragases Palaliologos, the last Emperor of Constantinople, the glorious city taken over by Turkish forces in 1453.

I asked Mr. Petreas if any of the men rode horses to Kalamata and he said they all marched on foot.  I posed this question because for some reason as we talked I kept picturing him sitting tall upon a horse, looking back at a band of troops, and getting ready to lead them on a charge.  I shook my head and looked at him again.  It was easy to picture Mr. Petreas,  this tall sturdy man, with such a noble bearing, as a Kapitanio—a leader who marched his men to Kalamata, setting off the spark for the War of Independence.  Yes, I could see Mr. Petreas as a Kapitanio.  It is in his blood. 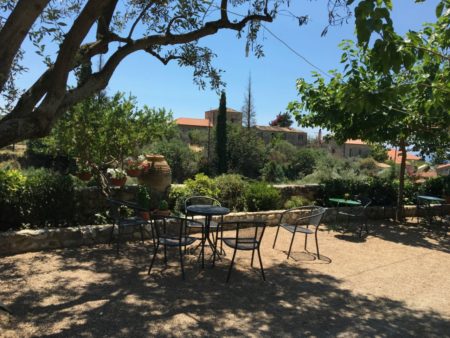 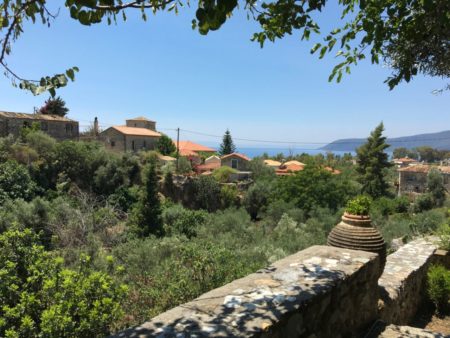 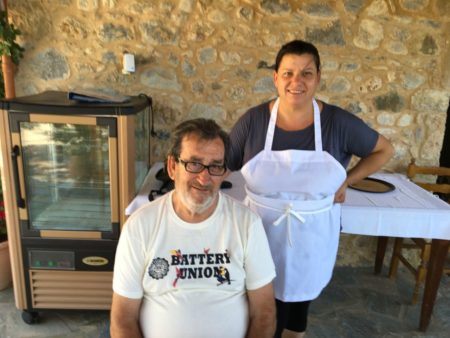 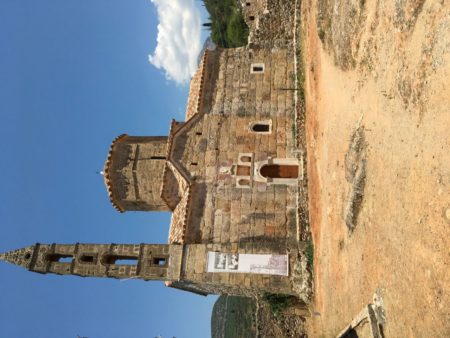