Past President of AHEPA No.170, Michael Gurlides has fallen asleep in the Lord 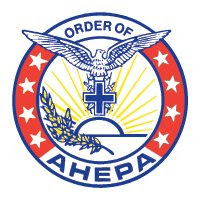 Past President of AHEPA No.170, Michael Gurlides was one of the devout developers instrumental to Saint Paul.  He became a member of the parish soon after it formed in the early 1950s.  He was one of the early directors of the Sunday School.  He was a Sunday school teacher. He was instrumental in the relocation of the church from Greenwich Street to Cathedral Avenue.  Departed brother Father Nick and he were the stalwarts developing the Decorations program for the Cathedral.  He was a past president of the Mr.& Mrs club. He was a proud member of AHEPA and served for many years as well as being a past president of AHEPA No.170.   He was the most devoted husband to his wife Demetra.  He passed away on her birthday and February 11th would have been their 77th wedding anniversary. Brother Gurlides endured the loss of two children with grace and dignity.

AHEPA past president Brother Michael Gurlides was responsible for organizing and holding a mass initiation under the Eugene Hoffman Nickerson Nassau County Executive administration that had the entire Nassau County Legislature Elected officials including the full Cabinet and Judges sworn into AHEPA Chapter No.170.

There will be an AHEPA Funeral ceremony tonight at 6:30 pm sharp
God rest His soul and
May his memory be Eternal
Viewing