THE POTENTIAL SIGNIFICANCE OF DONALD TRUMP TO GREECE AND CYPRUS 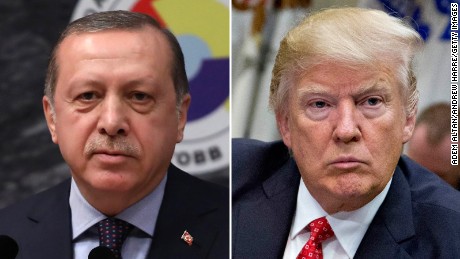 As of this writing, there are tensions between the Trump administration and the government of Turkish President Recep Teyyip Erdogan. The Trump administration has begun arming the Kurdish rebels of Syria. For Turkey, the prospect of American support for any Kurdish movement is an outrage considering that Turkey has more than fifteen million Kurds living in eastern territories that have long desired to break away and form a Kurdish homeland.

Indirectly, the rise of any sort of Kurdish entity will have an impact on the Kurds of Turkey who will be encouraged in their own armed struggle. The Trump administration’s support for the Kurds of Syria is revolutionary and has the potential to overthrow the entrenched foreign policy of America which has been pro Turkish since American business interests and policymakers colluded to support Mustafa Kemal’s victory over Greece in 1922. Donald Trump can truly be seen as an outsider who recognizes that Turkey is not America’s ally.

In the aftermath of the failed Coup in July 2016, Erdogan publicly denounced the United States for allegedly supporting the Coup and refusing to extradite the exiled foe of the Turkish President Fethullah Gulen. American policymakers blindly accepted Turkish insults and verbal abuses. Turkey has refused to support the United States in the fight against the Islamic State, which in fairness the US was only halfheartedly intent on waging.

As it stands, President Trump is demonstrating a seriousness to fighting the Islamic State and stopping the genocide and ethnic cleansing of Christians, Shiite Muslims, Yazidis, Kurds and other unfortunate communities targeted by these barbarians. President Trump seems to recognize that the Kurds are a genuine ally against Islamic state, unlike Turkey. Furthermore, President Trump’s pro-Russian policies are a major sign of an effort to fight the Islamic State.

The Russians have been intent on fighting the Islamic State for a variety of reasons which include the defense of Christians. In this regard, the Russian President is following in the example of the Byzantine Emperors of Constantinople such as Nikephoras Phokas and others who waged wars in defense of Christian lands and populations. Russians have recently been helping Syrian Christians rebuild Churches, a fact not reported in western media as it does conform with the anti-Russian hysteria being propagated.

President Donald Trump has the potential to fix American foreign policy and to correct the mistakes of previous administrations including the Bush-Cheney and Obama-Biden administrations. Without the invasion of Iraq in 2003, and the support for Syrian rebels after 2010, the Islamic State might not have become the threat that it has become. The Bush-Cheney invasion of Iraq lay the groundwork for the present World Crisis which might conceivably become a world war.

The Trump administration has the potential to achieve great things. It can end the crisis with Russia by working with Moscow to destroy the Islamic State. It can also reform American policy by terminating its support for Turkey by supporting a Kurdish entity in the Middle East. Through the weakening of Turkey, Greece and Cyprus can gain, especially now that Turkey is claiming Greeks islands and repeatedly violating Greek and Cypriot sovereignty in the Aegean Sea.

The Syrian War has been a disaster for Greece. The Greek islands have been overrun by refugees. Greeks have been generous and kind in providing humanitarian relief. But the danger of terrorists entering Greece among the refugees is a potential threat. The policies of President Obama and Secretary of State Hillary Clinton did enormous harm to Greece by contributing to an escalation of the Syrian War.

For the first time since Mustafa Kemal’s armies entered the City of Smyrna and slaughtered the Greek and Armenian Christians in 1922, there is an administration that may finally reverse this evil policy.