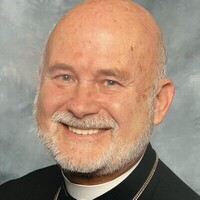 Rev. Fr. Constantine Combitsis, fell asleep in the Lord on Tuesday, December 13, 2022 at the age of 90 years at Holy Name Hospital in Teaneck, NJ. “Father Dean”, as he was often called, was born in Aretsou (Thessaloniki) Greece on October 15, 1932 and was the eldest son of the late Apostolos and Arhondia (Psomiades) Combitsis. His father, who was from Asia Minor by descent, was an American citizen because he served in the US Army in World War I. Right after he was born, Apostolos registered his son at the American Consulate as an “American” and, although he was born in Greece, he was the only other person in the family that had American citizenship and an American passport. He first put on the black robe of the chanter (psaltis) when he was eight years old in Thessaloniki at the start of the Greco-Italian war in 1940. There was a need for chanters since all of the men went to the army to fight. The then-Metropolitan of Thessaloniki, Gennadios, appointed him as the First Chanter in the church of St. Paraskevi in Nea Krini, about 20 minutes walking distance from Aretsou.  After the war ended in 1945 (two years after his father fell ill and died), and because of his American “status”, he was able to emigrate to the United States in 1946, taking his siblings with him. After six months, his mother joined her children in America.
He initially lived in Youngstown, OH in the home of his mother’s first cousin, and the family later moved to Chicago, IL after his mother remarried. He immediately became involved with the Church and was hired as the second chanter at the Evangelismos Greek Orthodox Church in Chicago. After the death of his stepfather in 1951, and upon completion of high school, he enlisted in the United States Air Force and was stationed at Lackland Air Force Base and subsequently at Randolph Air Force Base in San Antonio, TX. He also served as the first chanter and choir director at the St. Sophia Greek Orthodox Church in San Antonio.
The Air Force transferred him overseas and he served in Okinawa, Japan, for eight months, and then went to Clark Air Force Base outside of Manila, Philippines. He traveled to Tokyo, Japan two to three times a month for 18 months, going there for meetings, new orders, etc., while at the same time attending night school at the University of Philippines, He was finally honorably discharged from the Air Force in 1956 and returned to San Antonio, working in a bank and then in a chemical laboratory for a couple of years.
Through the help of an uncle, Fr. Dean returned to Youngstown, OH and was hired as the First Chantor of the St. Nicholas Greek Orthodox Church by the priest, Fr. George Hatzis. He simultaneously worked other jobs, such as in a factory, as an insurance salesman, and at a bank. He brought his family back to Youngstown and they were together again. Ever since he first put on the black robe as a young eight-year-old chanter in Greece, his dream in life was to become a priest in the Greek Orthodox Church. This dream and desire to serve the Church grew over the years. While he was young, he was personally groomed and taught by Bishop Germanos of Chicago, who had also served as a professor of Holy Cross Theological School in Jerusalem. In 1957, after his discharge from the Air Force, he expressed his desire to Biship Theodosios of Pittsburgh, who in turn petitioned Archbishop Iakovos of North and South America. He first had to get married before being ordained, however. One of the parishioners of St. Nicholas in Youngstown, an elderly woman who loved him very much, introduced her niece as a suitable spouse. She brought her niece to America from Greece and on May 13, 1962, Constantine Combitsis married Argeroula Loutraris in Pittsburgh.
On the feast of St. Nicholas, December 6, 1962, Constantine Combitsis was ordained to the diaconate at the St. Nicholas Greek Orthodox Church in Pittsburgh, PA, and one week later on the feast of St. Spyridon, December 12,  he was ordained as a priest at St. Spyridon Greek Orthodox Church in Monessen, PA. His first parish assignment was at St. Spyridon Greek Orthodox Church in Clarksburgh, WV, where two children were born: Paul (Apostolos) and Maria. He served the parish from 1962 to 1966.
He was subsequently assigned and served in the parishes of: Annunciation, Endicott, NY (1966-1973); St. Catherine’s, West Palm Beach, FL (1973-1975); Holy Trinity, Camp Hill, PA (1975-1980); St. Nicholas, Atlantic City, NJ (1980-1990); and Ascension, Fairview, NJ (1990-2001). He was also assigned to the parishes of St. Spyridon in Washington Heights, NY and St. Gerasimos in New York, NY. He obtained his Master of Theology (1980), and subsequently his Doctor of Divinity (1982) and Doctor of Theology (1981), defending his thesis on the explanation of the Divine Liturgy. He was also inducted by Cambridge Who’s Who with a lifetime achievement recognition for demonstrating dedication, leadership and excellence in religious services.  He retired from active priesthood in 2018.
Fr. Constantine is survived by his loving wife of 60 years, Presvytera Argeroula (Loutraris) Combitsis; his son Paul (Apostolos) Combitsis and his wife, Chrystal; his grandsons Constantine and Nicholas Combitsis; his sister Presvytera Eleni (Combitchi) Nacopoulos and her husband, Rev. Fr. Theofanis Nacopoulos and their children; his brother-in-law Theodoros Loutraris of Athens, Greece, and his wife Aristea, and their children, as well as Godchildren. Fr. Constantine was preceded in death by his daughter, Maria (Combitsis) Kane in 2008, and his brother, Nicholas Combitchi in 2017.
His final resting place will be at Fairview Cemetery in Fairview, NJ. May our Lord give rest to his soul “… where the righteous repose… in the bosom of Abraham…”, and may his memory be eternal.