GreeceCultureReview: Criss Angel and The Supernaturalists mesmerize at The Fox Theater SPECIAL
GreeceCultureFeatured

Review: Criss Angel and The Supernaturalists mesmerize at The Fox Theater SPECIAL 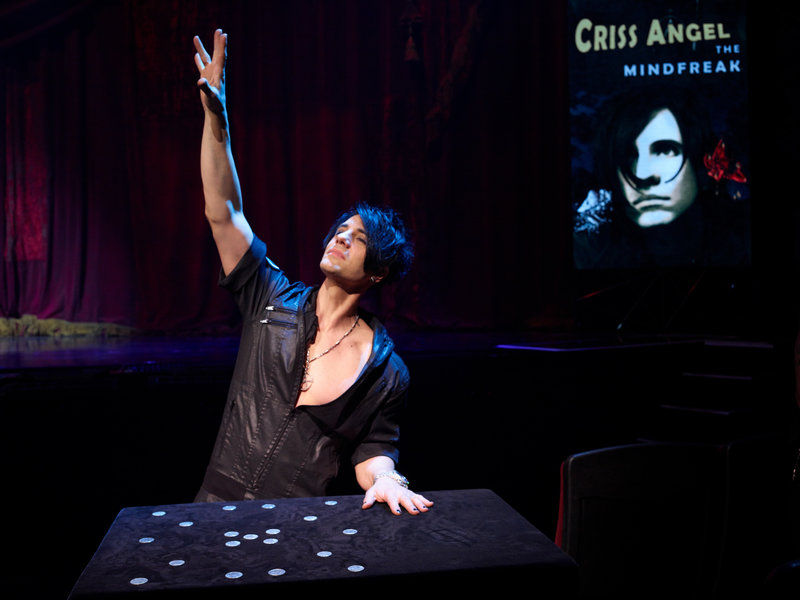 Mashantucket – On Aug. 27, superstar magician Criss Angel performed with The Supernaturalists at The Fox Theater at the Foxwoods Resort Casino in Connecticut, for an excellent turnout.

The show began with a comedic magic skit with Fifi, and her quest of becoming a showgirl, where she was joined by “The Great Maestro,” who is also known as “The Joker.” “Welcome to my world, The Supernaturalists,” Angel said, via a video greeting on the televised screen. “Prepare to witness the impossible. Are you ready?”

He went on to introduce Johnny Dominguez, the dog conjuror, as well as female magician Krystyn, mentalist Banachek, “Magician of the Year” winner Stefan Vanel, close-up magician Adrian Vega (where he was able to get a kernel of corn out of his eye), and Landon Swank, who was able to blow away the competition on America’s Got Talent for 10 episodes, whom he subsequently dubbed as “badass.”

“How are we doing Foxwoods?” Swank asked, prior to sharing that there are 52 cards in a deck, and he asked a random spectacular to select a card, the four of hearts. He was able to retrieve that card that was picked via a neat crossbow act, where the arrow shot that particular card on the dartboard. It was also great to see Swank teleport Harmony on stage with him, and together they performed a neat teleportation act. Finally, Swank made himself disappear after he placed a white cloth on himself.

Krystyn went on to take the stage, as he nailed Houdini’s straight-jacket escape in 30 seconds, while she was up in the air, and Stefan performed an exquisite card manipulation segment, which left everybody in total awe. It was fun The Great Maestro do a parody of Stefan’s manipulation act, which was clever, yet Fifi revealed how The Great Maestro did it, which was also fun to watch, as she poked fun at him.

Banachek made the crowd’s jaws drop with his mind-reading routine, and Dominguez, performed a new and improved dog conjuring act. Angel, through a video screen, described close-up magic as having the dexterity of fingers to manipulate random objects, and the very best close-up magician he could find is Adrian Vega, and rightfully so. He made a woman select a card from a deck, which was the five of hearts, he made her sign it and placed it back in the card. By melting the deck with smoke, he was able to successfully retrieve the signed card for the lady. In addition, Vega was able to put pieces of thread together, all of which he initially ripped up, and he was able to transform four one dollar bills into hundred dollar bills with his impressive sleight of hand techniques.

The Supernaturalists saved the water escape act for last, especially since it was the most dangerous. This time, illusionist Landon Swank performed it, and he was able to have the fans at the edge of their seats the entire time as he was trying to escape the water chamber in full view. Swank deserves a big round of applause for taking the challenge and for delivering this brave and life-threatening demonstration.

Following the intermission, world renowned magician Criss Angel starred in the second portion of the show, where the crowd went absolutely nuts. “Foxwoods. How are we doing?” he asked. “It’s so awesome to be back at our second home. Are you having a good time?” and the answer was a resounding “yes.”

Angel went on to perform his classic demonstration, the “metamorphosis” with Harmony, and it was a major success. “I can’t hear you Foxwoods,” he screamed, prior to revealing that he has a new television on A&E, which is called “Tricked.” He shared that he loves performing at The Fox Theater since it is “cozy and intimate.” As a kid, he would show his mom his tricks 30 times a day, and that’s what helped him get better. Back then, he didn’t have any large screens or lights, and it took him “18 years to become an overnight success.” He did acknowledge that he did have “10 little assistants,” which were his “10 little fingers.” His most fascinating demonstration, was the close-up magic that he performed in front of his spectators’ eyes with the quarters on a table, which he made appear and reappear out of nowhere. If anybody blinked, they would have missed an awesome demonstration. When he was a student in high school, he would perform this trick in the lunchroom, where a classmate of his was convinced that he was not from this planet. His clever response was as follows: “Maybe, I am, from a black star,” and a haunting version of Celldweller’s “It Makes No Difference Who We Are” played in the background, which helped capture the mood and essence of the illusion.

The aforementioned trick made everybody in the audience inquire how he did it, and Angel acknowledged the fact that it took him “years and years of rehearsals.” “In Two,” where he split up Harmony in half, was equally remarkable, yet gruesome for some to watch.

Angel invited all his fans to his after-party at Shine nightclub, following the second show, and he discussed the importance of the September 12 charity event that he is doing at the Luxor Hotel and Casino in Las Vegas, for his son, Johnny Crisstopher, who has been battling leukemia, and he is raising money to help make pediatric cancer disappear. He encouraged everybody to go check out his website at Criss Angel HELP, in an effort to donate and help out this great cause, which is so dear to his heart. They are trying to raise one million dollars, where all the money will go towards research and treatment for pediatric cancer.

Angel has many celebrities involved in this cause, including Dee Snider of Twisted Sister, Richie Sambora of Bon Jovi, Flavor Flav, Siegfried & Roy, Tony Orlando and Jerry Lewis, among countless others. Speaking of Snider, Angel directed an acoustic music video for the classic Twisted Sister hit “We’re Not Gonna Take It.”

Overall, “The Supernaturalists” get better with each and every live show, and there is something different every time, to keep things fresh. They were all extremely talented and gifted magicians in their own right. Criss Angel, as always, was in a league of his own, and a master of grand illusions. Seeing Angel perform live at The Fox Theater in the second act was like watching the summer Olympics, and he was our Michael Phelps. They earned five out of five stars.