On the Road in Greece: Pavlos Vrellis Greek History Museum 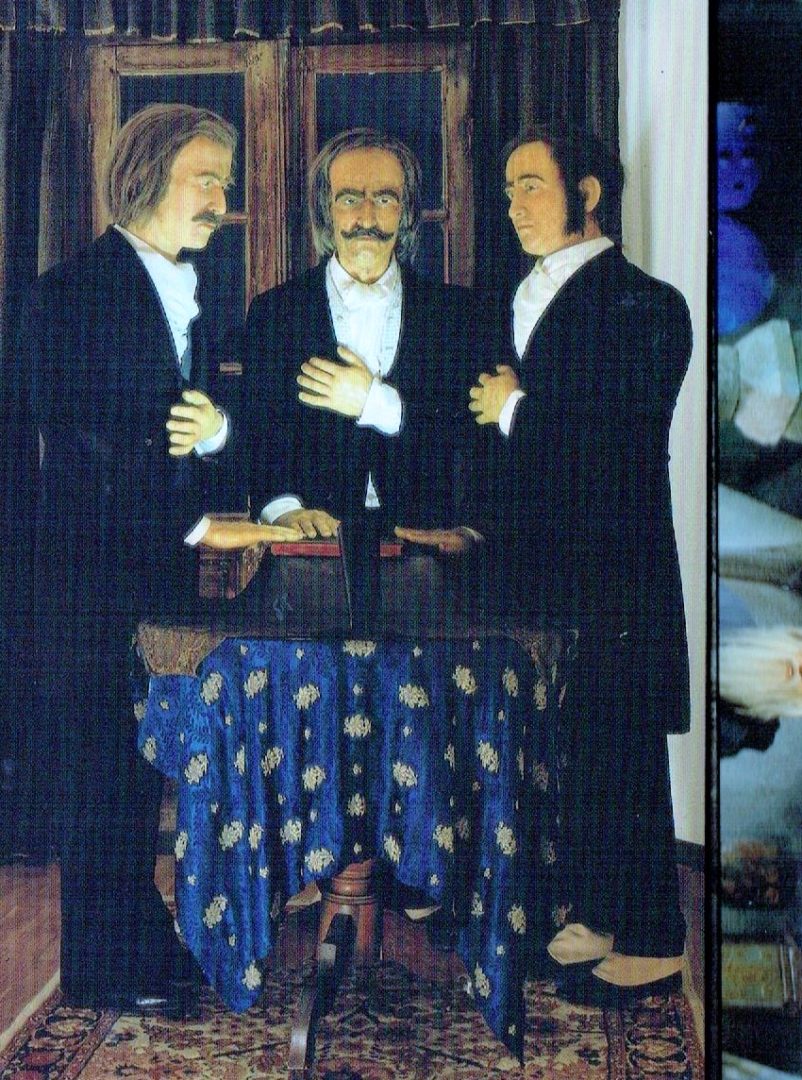 By Catherine Tsounis
The middle class in Greece is being destroyed by open borders, and the European Union’s support of a culture in opposition to the Greek language, civilization and Greek Orthodoxy. In 2017, the way the political scene is going, the only country that is maintaining Byzantine civilization and Orthodoxy will be the 80 million Russians supported by their state. There are middle class Greeks from Greece’s borders who are fighting to keep Hellenism and Western civilization brilliant. The Pavlo Vrellis Wax Museum is a testament of a dedicated Epirotan who loved his country. Pavlo Vrellis, a genius, created wax figures in a traditional Greek setting. His work probably makes his museum the only one in the world created with excellence professionalism by one person:  sculptor Pavlos Vrellis. His soul and DNA touched every aspect of the wax figures and influenced the architecture. A third party did not create the figures from Greek history events. It was all his work.
I could visit the Pavlos Vrellis Wax Museum, because of Kapogiannis Travel Agency in Tripolis, Arcadia, managed by Kostula and Maria Kapogiannis and associates. He museum visit was part of a three-day tour of Lefkada and Tripoli. All for 160 euros with two days hotel single room. I was willing to pay 100 euros for a museum visit from Metsovo. Fortunately for my budget, the Pavlos Vrellis Museum was part of the itinerary.
We arrived in a late spring day. Cool, but crowded with tourist buses from Athens. Large passenger Pullmans were everywhere. Long lines of tourists of all ages extended out in the courtyard. Children were amazed seeing Greek history come alive. Its location is south of the city of Ioannina, Epirus in Bizani municipality on the Ioannina-Athens national road. Mr. Vrellis bought about 4 acres. The buildings are replicas of an Epirotan, 18th century fortress style. The museum hall is circular with connecting levels in mountains, caves, houses, churches and alleys. The units are pre-1821 history, Greek War of Independence (1821-1830) and themes from World War II. 1 The amazing fact is that Mr. Vrellis was not rich. He began his life work in 1983 as a 60-year-old pensioner headmaster. He worked as a sculptor, architect, painter, costume designer. He worked alone. Mr. Vrellis wanted the visitor to live the events.2
The wax figures of the Epirotan Benefactors, who created and still have an influence on the Greek state, is shown. They were ordinary men, not exceptionally handsome or tall. You can see persons like them walking through the streets of Epirus. They wanted freedom and a national identity. Their spirit lives on in the 2017 working class and pensioner of Greece. The previous day I had seen the Museum of Ali Pasha in Ioannina. A Vrellis museum exhibit showed a Turkish elite soldier holding the head of Ali Pasha.
I asked the young generation what were their favorite exhibits. They said: “The oath taken by the three members of the Association of Friends (Filiki Eteria) 1814; “The blowing up in Kouggi, inside ‘Agia Paraskevi church by the priest Samouil (1803); The Klephts and Armatoloi (fighters); Theodore Kolokotronis; A WWII soldier writing a letter from the Albanian front; Mountainous Operational places in Surgeon’s Quarters; Artist’s workshop and Artist.
I asked someone what was the Kouggi blowing up in 1803? Every Greek child is told from young the women and children danced on top of the mountain of Zaloggou and jumped to their deaths, rather than facing enslavement. 2017 ISIS is a continuation of this mindset. There were other heroes: the monk Samouil and the severely wounded were left behind to give the gunpowder to the Turkish troops. Samouil gave it and then lit a candle blowing up everyone. I personally have no respect for the memory of Ali Pasha who was glamorized as a hero the previous day in Ioannina by a tour guide. Good business, but fake facts. This museum is a treasure of accurate historical facts.
The Hellenic News of America, Hellenic American National Council, Prometheus Greek Teachers Association, The Heritage Museum of Epirus and Hellenic Paideia Association of America will sponsor a Greek Heritage Education Luncheon honoring Catherine Tsounis, Journalist/Writer/Educator of the Greek Language and Culture. The event will be held on Sunday, September 24th, 2017, 3:30 p.m. at the Heritage Museum of Epirus, 2514 Broadway, 3rd floor, Astoria, NY. The Luncheon is free, complements of the sponsoring Organizations. Registration in the Prometheus Greek Teachers Pension Plan will take place. All are invited to visit the Heritage Museum of Epirus. Please RSVP Prometheus Greek Teachers Association President Demosthenes Triantafillou at 551-574-2781 or email [email protected] and John Siolas 718 631-7237 or [email protected].
References:
1.       Wikipedia Pavlos Vrellis Greek Museum
2.       “Museum of Greek History, Pavlos P. Vrellis”, www.vrellis.gr
Photos:
Photo 1 – The Ioannina-Athens national road
Photo2- An Epirotan, 18th century fortress style
Photo 3 – The buildings are replicas of an Epirotan, 18th century fortress style
Photo 4 – A WWII soldier writing a letter from the Albanian front
Photo 5 – Mountainous Operational places in Surgeon’s Quarters
Photo 6 – “The blowing up in Kouggi, inside ‘Agia Paraskevi church by the priest Samouil (1803)
Photo7 – The oath taken by the three members of the Association of Friends (Filiki Eteria) 1814;
Photo 8 –  Artist’s workshop 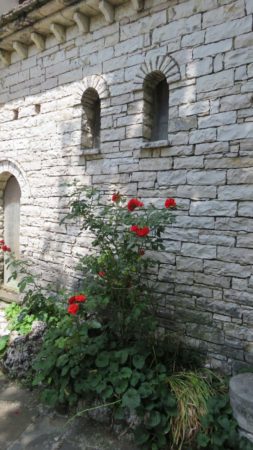 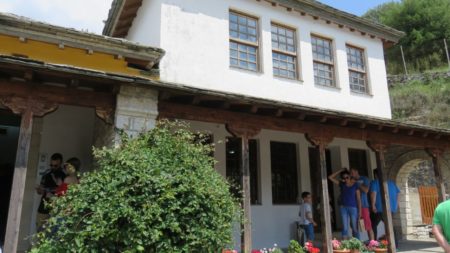 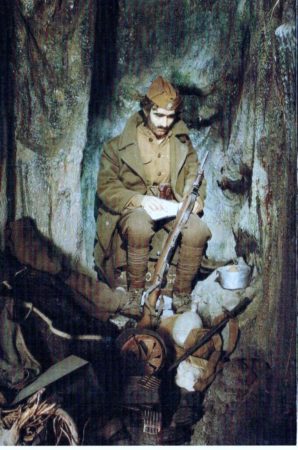 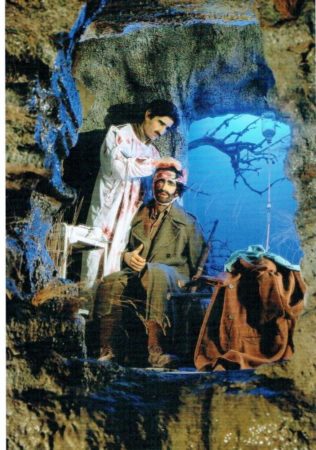 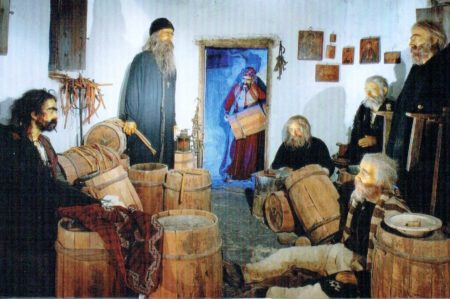 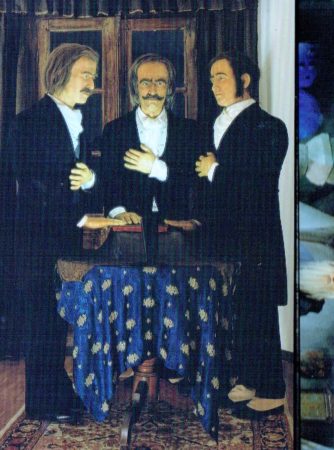 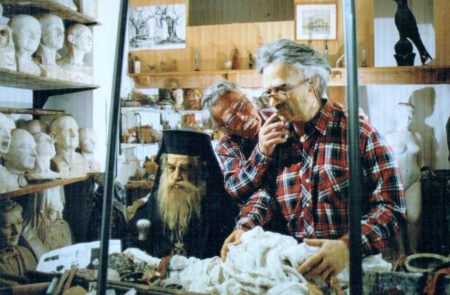