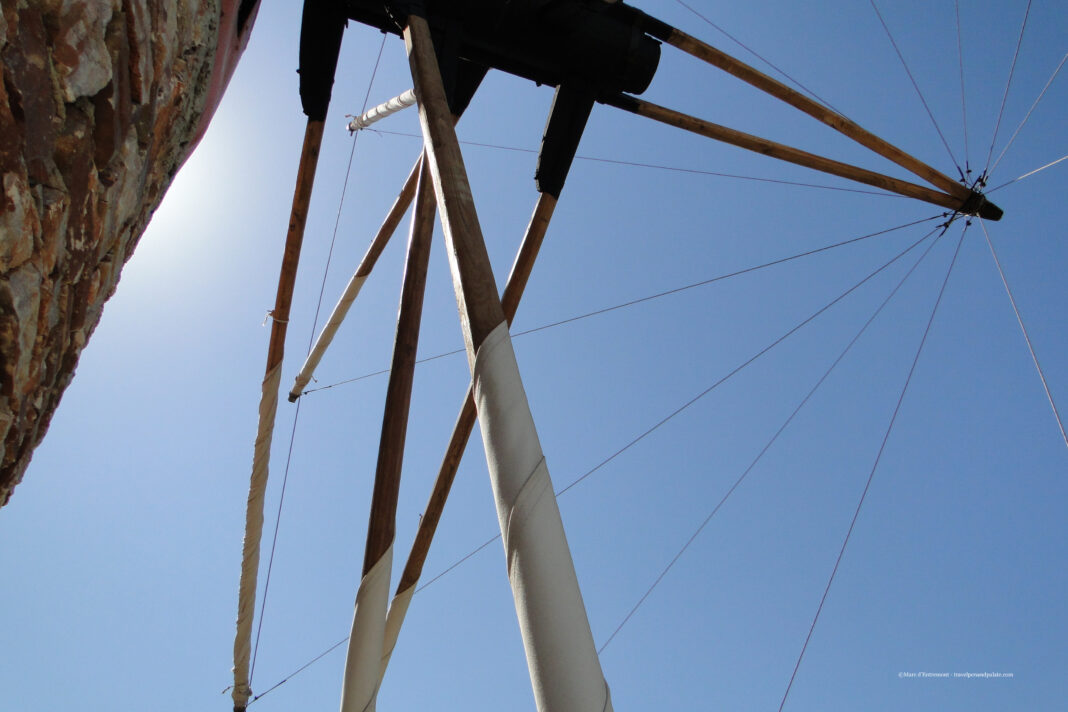 Of all the treasures in the fabled land of Greece red flags are rarely raised on the subject of saving utilitarian windmills. Yet the iconic circular stone structures dot the land – both islands and mainland – and their images adorn countless postcards. Their stark beauty as ruins of a bygone agricultural age and the bird-like sails of restored mills stiff in the wind, evoke the same timelessness as the Acropolis of Athens or sacred Mt. Athos.

The cylindrical landmarks tell stories of the drive for labor saving devices even in the pre-industrial age. It was in the Medieval era (12th century) that windmills appeared in Greece. Milling grain had been an even more laborious job using hand pounded mortar and pestles in an age when bread was the staff of life. Harnessing the near steady breeze of both coast and hills was a technological breakthrough akin to present day electric wind generators.

Building a windmill was no easy task. Its location had to be carefully chosen with preferential treatment given to capturing northerly winds on hillsides, gorges or on the edge of capes. Yet at the same time, distance from a village was important. Donkeys were the work animals on the rock-strewn terraced farmland of steep hillsides. The proximity of a village with a population to purchase the flour was an important consideration so as not to waste time in transport.

Winds can shift directions during the course of a day. During the busy August to November harvest season a mill could ill afford being down because of fickle winds. The brilliance of the traditional design was developing a rotating conical roof that would follow the wind moving the massive wooden gear mechanism in turn.

The white triangular sails were similar to those used on ships and were anchored on rotating spokes. The sails could be shortened or lengthened depending on the wind’s velocity. The turning axis set in motion a system of wooden gears making a mill stone turn above a stationary stone that would grind the grain into flour.

Wind permitting, a mill could grind up to 150 pounds of grain per hour. The mill men needed to develop skills to read the weather and gauge the strength of winds.

Today’s picturesque ruins of stone mills dotting the Greek countryside are favored settings for painters and photographers. An increasing number of survivors stand as municipal monuments for tourists or repurposed as annexes for museums, homes, rental apartments and hotels. Yet on Sifnos Island, in the Cyclades group, Mr. Ionnis Trinas constructed ten years ago (2/3rd size) what very well may have been the first fully functioning windmill in over a century.

The impressive stone structure was perched on a typically steep hill overlooking the Aegean Sea near the village of Artemonas. Mr. Trinas spent a lifetime restoring old mills and fulfilled his personal dream, constructing one himself with astonishing speed in only 18 months. Astonishing because every wooden gear, every stone placement and even the grinding stones were personally constructed by his hands.

After Ionnis set the sails, it was with great restraint that this journalist kept tears of marvel at bay while sitting inside this pre-industrial machine as the great wooden gears rotated the stones, turning his family’s wheat into the whole grain flour that would become loaves of savory Greek bread.