St. Nicholas Church and Shrine at Ground Zero Begins Mission to Bring Light to the World When the St. Nicholas Greek Orthodox Church and National Shrine at Ground Zero in New York was lit for the first time on Sept. 10, the world took notice.

Television covered it. Thousands of newspaper articles were written, and media impressions about the 9/11 remembrance church lighting were created across the globe.

“The global reaction was surreal,” said Michael Psaros, vice chairman of The Friends of St. Nicholas and Archon of the Ecumenical Patriarchate. “The Greek Orthodox community has never had a bigger event in this country than what occurred Sept. 10”.

Now, the Greek Orthodox community hopes the church will serve as a beacon of light and hope to the world, a shining example that good will triumph over the evil of the World Trade Center terrorist attack in 2001.

St. Nicholas Church, still under construction, is on holy ground.

The new church serves as a place of remembrance for those 2,977 Americans massacred, murdered, and martyred in the coordinated attacks.

9/11 images and tributes to rescue workers are part of its design.

“They have no tombstone. It’s their cenotaph. It is the place they will be remembered,” Psaros said. 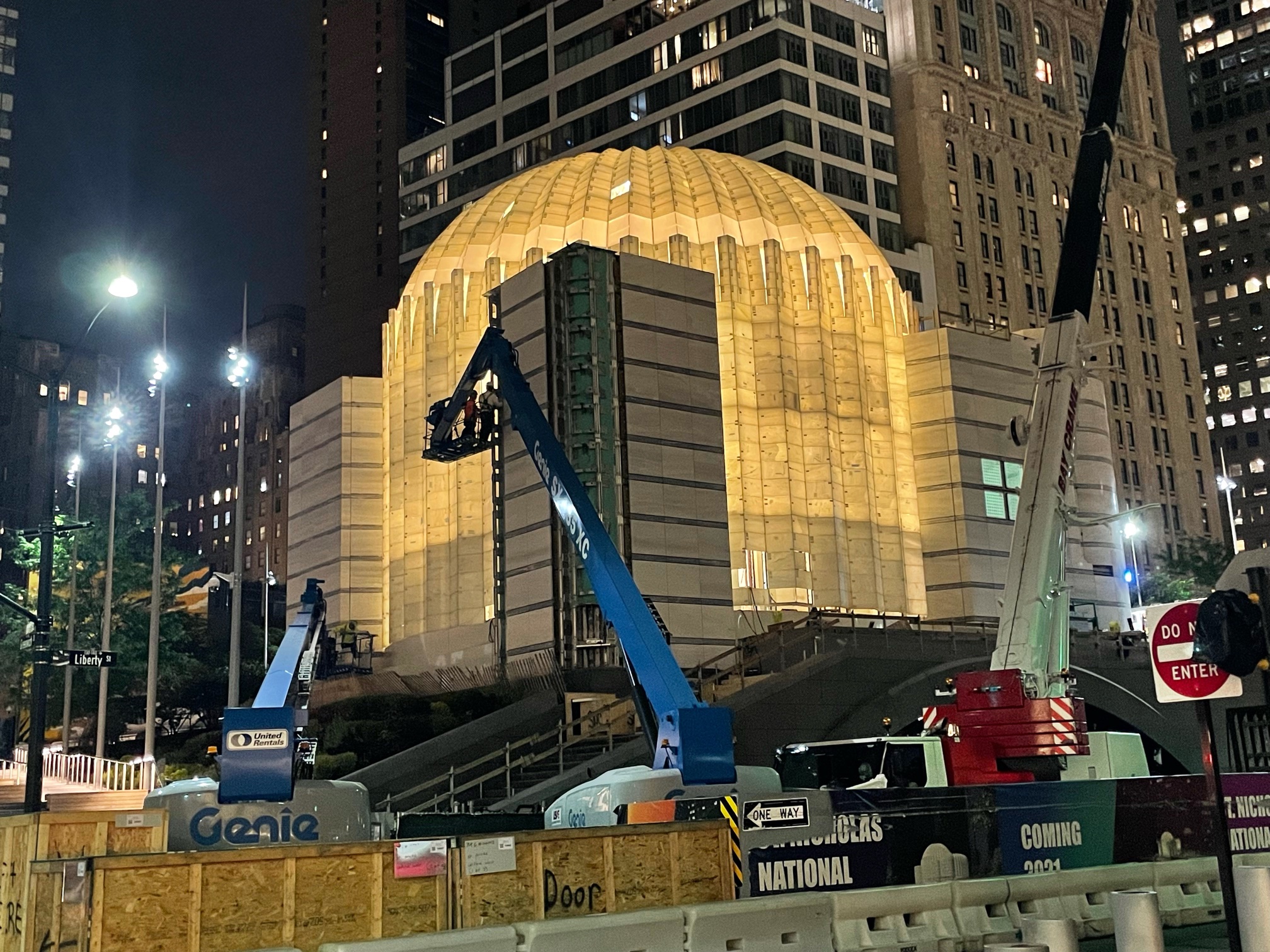 The lit church is a counterbalance to terrorist acts carried out in the name of religion.

“Through the mighty prayers of St. Nicholas we have arrived at this evening of prayer and remembrance to send out a message, a message of hope to the whole world,” said His Eminence Archbishop Elpidophoros of America, who officiated at the lighting ceremony.

“For my friends, the day of 9/11 was nothing less than the Passion and crucifixion of our nation and the rebuilding of St. Nicholas is our resurrection,” he said.

“Let us dispel every shadow of the evil that was inflicted here in this place and to so many of our beloved ones.”

With these closing words from Archbishop Elpidophoros, the interior of the church was lit for the first time.

Participants cast their own light with Easter candles.  The experience was Psaros’ proudest moment.

“I will have that moment with me the rest of my life,” he said.

Psaros said a special process was created to allow the church’s interior light to shine through.

Marble for the shrine comes from the same mountain quarries used for building the Parthenon.

The marble was milled to a certain millimeter width making it translucent. Special lighting in the interior combined with the treated marble allowed light to shine through the shrine, Psaros explained.

“This is the first time this technique has been tried. It is unique to the world.” 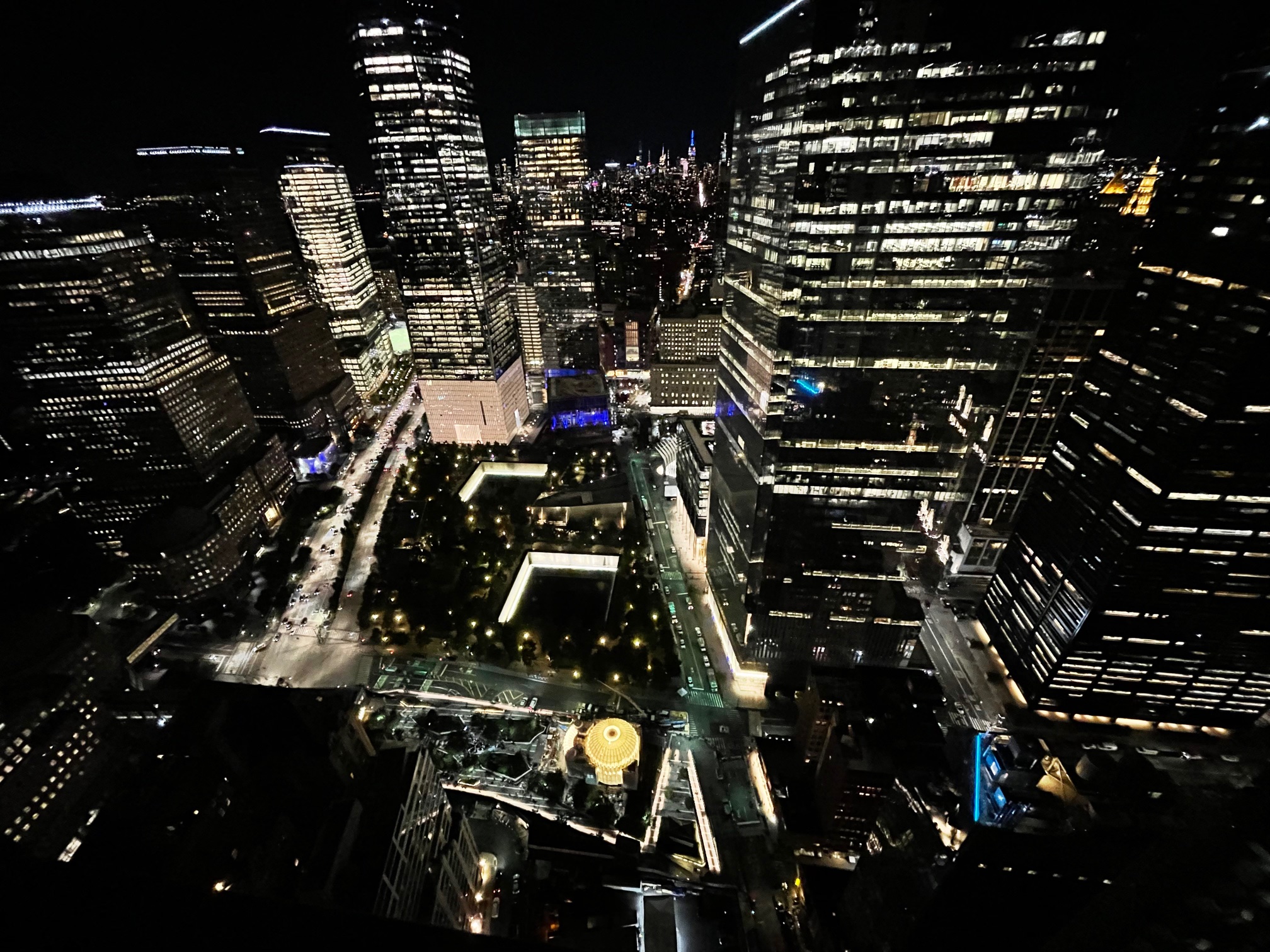 For many, it will be their first exposure to the Greek Orthodox Church, a chance for the Church to be a witness to the world.

Beyond the church, the St. Nicholas national shrine will also promote Hellenism.

“This became our overnight American Parthenon. It will be the most visible symbol of Hellenism in America.” 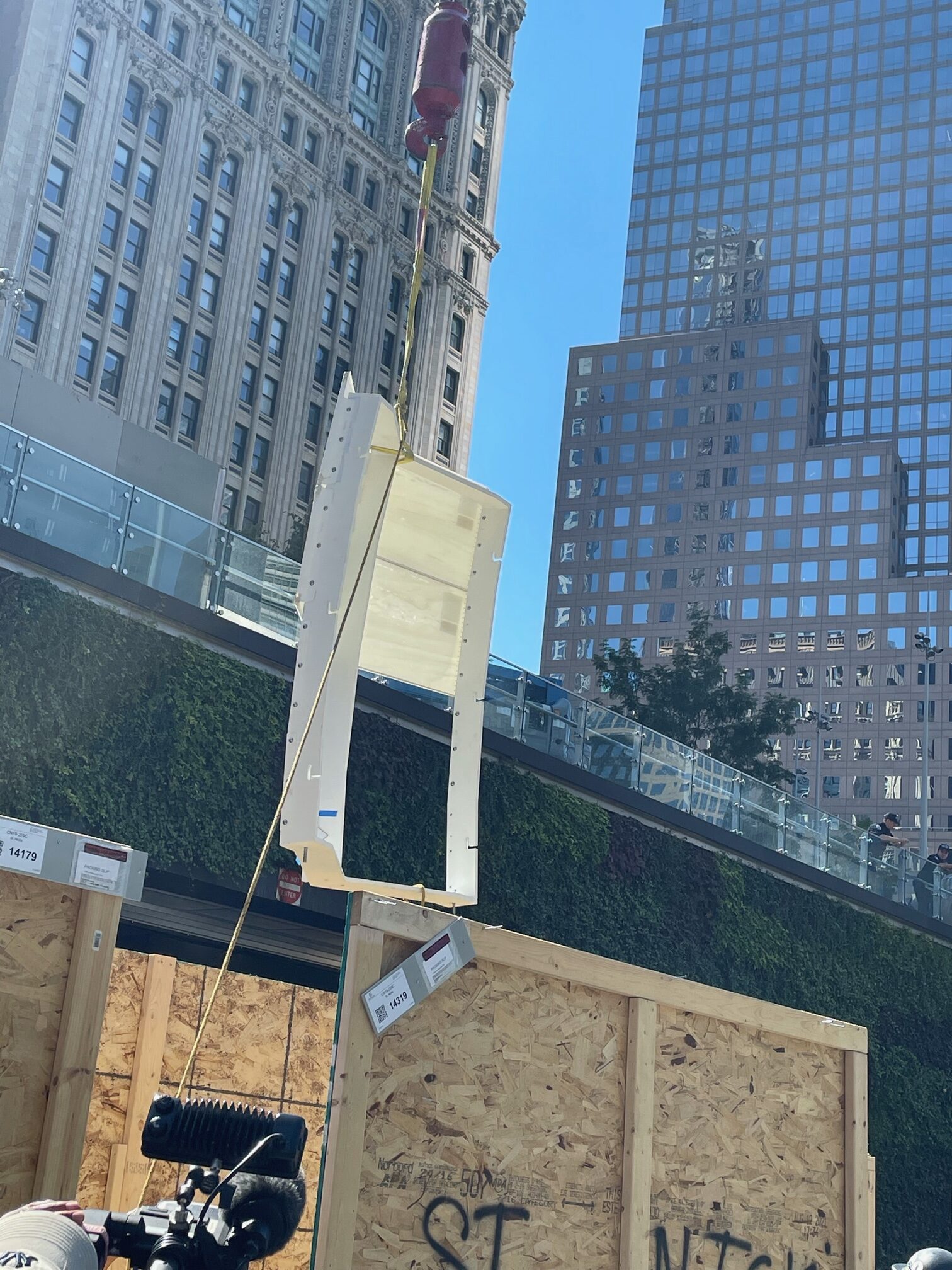 This national shrine will have two roles. It is the St. Nicholas Greek Orthodox Church with a rich religious life, guided by the head priest, Father Andreas Vithoulkas.

But the new St. Nicholas Church will belong to everyone.

“We hope millions become parishioners of this church,” Psaros said.

It will also forever be a symbol, a place of remembrance.

“Its’ doors will be open for the world,” he said.

People will be able to enter the shrine and light a candle in prayer and remembrance.

With the conversion of St. Sophia into a mosque by Turkish Prime Minister Erdogan, St. Nicholas stands as the best representation of all that St. Sophia was.

“We have built the American St. Sophia, the daughter of the mother church,” Psaros said.

The church exterior is finished but the interior work continues.

The next significant event is the opening of the doors ceremony on Nov. 2.  His Holiness Ecumenical Bartholomew will lead the ceremony.

The church is scheduled to open for worship by Easter in 2022.

Psaros said the iconography inside the church will be stunning. It’s being created by His Grace Bishop Joachim, one of the world’s experts on Byzantine iconography.

“The iconography will be novel,” Psaros said, making the church a destination visit for travelers.

What made St. Nicholas possible

Psaros points to the lighting ceremony and the fact that the church is being constructed on time and on budget, even with the disruptions from COVID-19, as an example of what Greek Americans are capable of with the right leadership in place.

It was the enthroning of His Eminence Archbishop Elpidophoros that gave the project credibility with the governor of New York and the Port Authority, allowing the church’s construction to resume, Psaros said.

Next, the independent nonprofit Friends of St. Nicholas trustees, “each of whom is an incredibly successful business person,” were given exclusive rights to fundraise.

“We could not have raised $60 million if the donors didn’t have the utmost confidence in our ability to deliver,” he said.

The total cost of the project will be $85 million.

About $40 million had already been spent when the project was shut down back in 2017.

After the Friends of St. Nicholas was created to oversee the budget, fundraising, and construction in January 2020, another $60 million was raised to complete construction.

Now they are working on a $20 million endowment that will be used to pay for security, maintenance, and upkeep.

To date, the Friends have raised $10 million toward the endowment and fundraising is ongoing.

The bulk of the donations have come from about two dozen families and six leading Orthodox institutions. That includes a $10 million donation from the Spanos family.

This past spring, in April and May, the Friends successfully raised $1 million a week for 10 straight weeks.

The public will be able to see the fundraising success. A donor wall at the church site identifies anyone making a donation of $100,000 or more toward the shrine.

“We are converting a small Greek Church into a Shrine for our Nation and the world, with the greatest of missions,” reads a statement on the Friends of St. Nicholas website. “We are grateful for every offering of prayer, support, and gift.”

“And we know that in a few short months, the Divine Liturgy will be chanted once again within the walls of the little Church at the World Trade Center, to fulfill the purpose the Lord gave to His disciples.”

Find out more about the St. Nicholas Church and National Shrine.