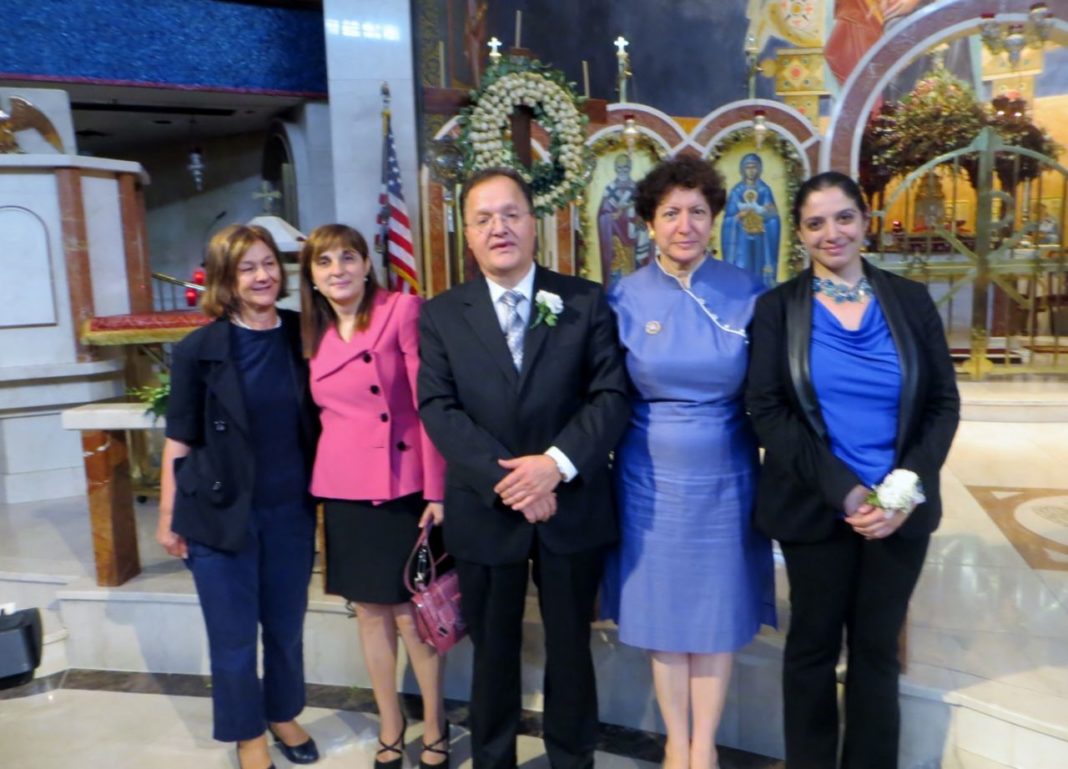 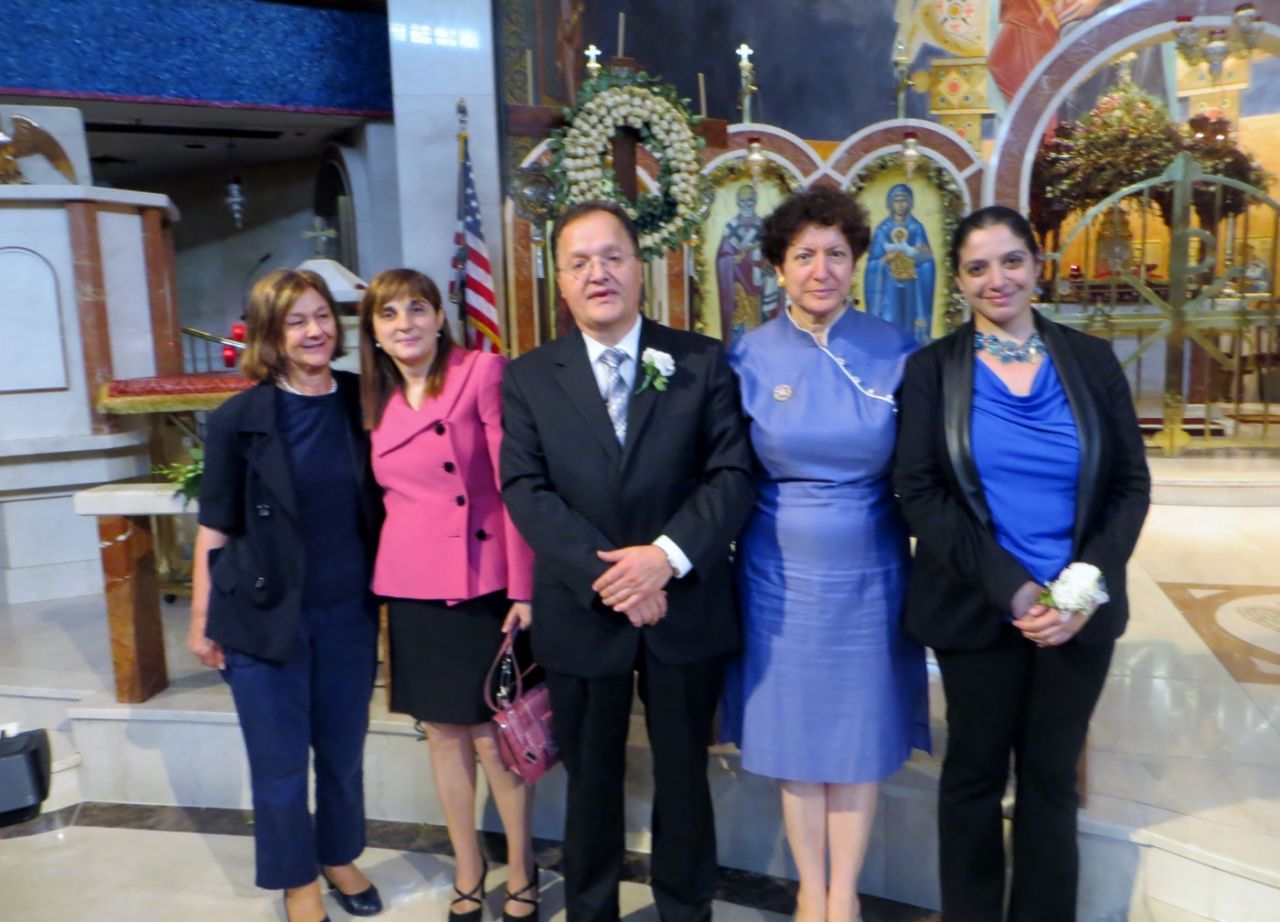 “The most perfect political community is one in which the middle class is in control, and outnumbers both of the other classes,” Aristotle. The “Stephen and Areti Cherpelis” Greek School of St. Nicholas Church, Flushing, New York has molded youth for generations. They are in middle class occupations in the North East. The 2013 Commencement event took place on Saturday, June 8th in St. Nicholas Greek Orthodox Church. A reception followed in the Sarantakos Hall. Over two hundred persons attended.

The theme was “AIEN ARISTEUEIN”, or Ever to Excel“. This motto “has been used as by a number of educational institutions. The phrase is derived from the sixth book of Homer‘s Iliad, in which it is used in a speech Glaucus delivers to Diomedes. During a battle between the Greeks and Trojans, Diomedes is impressed by the bravery of a mysterious young man and demands to know his identity. Glaucus replies: “Hippolocus begat me. I claim to be his son, and he sent me to Troy with strict instructions: Ever to excel, to do better than others, and to bring glory to your forebears, who indeed were very great … This is my ancestry; this is the blood I am proud to inherit.” (https://en.wikipedia.org/wiki/Ever_to_Excel). This is exactly what is being done in this unique urban school.

The speakers presented interesting facts. “The church and school were built by many immigrants as me,” explained Dikaiophylax Archon Stephen Cherpelis. “We worked with dedication. George Tenet was a graduate of our school.” Very Rev. Paul Palesty, protopresbyter, was a graduate.

College student and outstanding scholar informed us about the unique island his Father, Antonis is from. “We most all know of our roots. We are blessed with the heritage of a unique civilization. My Mother is from Cyprus. My Father is from Lemnos with a myth of what the Lemnian women did to their men.” The scholar was referring to the “Curse of the Lemnian Women.” At https://www.theoi.com/Olympios/AphroditeWrath.html, “Pseudo-Apollodorus, Bibliotheca 1. 114 (trans. Aldrich) (Greek mythographer C2nd A.D.):

“Lemnos happened to have no males at the time [when the Argonauts visited the island], and was ruled by Hypsipyle, the daughter of Thoas. The reason for this was that the women of Lemnos had failed to give due honors to Aphrodite, in return for which she afflicted them with a foul odor. Whereupon their husbands took to bed women whom they captured from neighboring Thrace. For this dishonorable treatment the Lemnian women slew their fathers and husbands.”            My late Father George, whose father was from the village of Pangia, opposite the island of Imbros, always said “the women rule the world.” He was referring to the Amazon society of Lemnos (https://www.myrine.at/Amazons/History.pdf ).  It is amazing what one learns at a commencement event in the Greek-American community. For more information on keynote speaker Kostas Koutsoubis address, visit, https://www.greeknewsonline.com/?p=26811; https://usa.greekreporter.com/2013/06/20/kostas-koutsoubis-speech-at-st-nicholas-greek-school/; 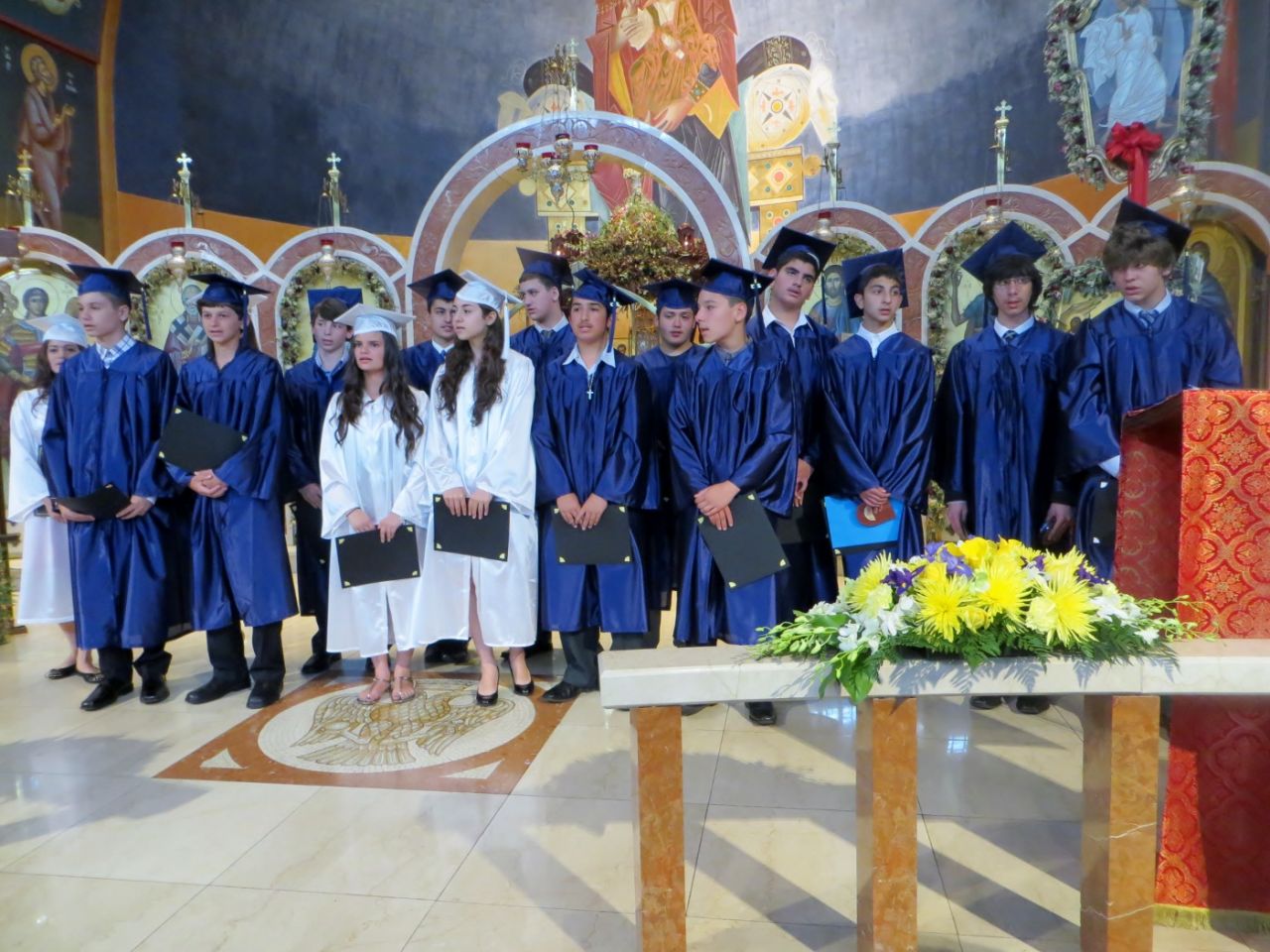 “Our 2013 students are a strong graduating class,” explained Greek Afternoon School Principal George Kanellopoulos. “They come to learn the basis of Western Civilization, religious hymns, ancient Greek plays and the wisdom of philosophers. You must transmit Hellenism to the next generation. This responsibility is on your shoulders. Do not let the Greek language be extinguished or leave our Greek Orthodox Church.” In the face of global assimilation with persons of all faiths and ethnic backgrounds, this will be a major challenge to Greek Orthodoxy.

“I served as president for two years and on the Board for eight years,” said PTA President Calli Kalantzopoulos. “My son, George, a 2013 graduate, has been attending Greek school for years. He will be attending Stuyvesant H.S. in the fall.” I remember Callie as a child with her parents and grandparents from Nysiros swimming on the beach of Mattituck Long Island. She is now a dynamic community leader in an urban church.

“There more than 340 Greek afternoon and Saturday schools currently functioning in the United States with an enrollment of approximately 30,000 students. In addition, many parishes throughout the country offer evening Greek classes…. Both the day and the afternoon Greek language schools offer a program of studies that includes the teaching of Modern Greek language, Greek history and culture as well as elements ofGreek Orthodox faith and worship. The day and afternoon schools operate under the auspices of the Greek Orthodox Archdiocese of America and comprise the Archdiocesan School System,” according to https://www.goarch.org/archdiocese/departments/greekeducation/archdiocesanschools.

Prof. George Kanellopoulos, as he is known to many, has aided many of his students obtain their dreams. He is unselfish, tough and a no-nonsense educator. His patience has resulted in saving of youth. A thirteen year old who was having problems in her first year of High School had her life changed by Prof. Kanellopoulos suggestion of hiring two tutors from Francis Lewis High School. She achieved success through his colleagues tutoring and their psychological support when her Mother was diagnosed with cancer.

He is an immigrant from the town of Demetsana, of the province of Gorytinia in the State of Arcadia in the Peloponnese. The educator has worked in the shadows helping all in the global community of Queens, New York City. He is the heart of the Greek Afternoon School, guiding his staff to meet the challenges of 2013. As one instructor said doing her cross, “Thank God it is 2013 and we are still teaching Modern Greek.” The instructors are Aggeliki Agka, 2013 teacher of the year Antigony Vlachogianni, Pepi Volika and Areti Giovanou, Katerina Dimou, Spyridoula Liakonis, Panagiota Lilikanis, Maria Manousakis, Marianna Spatharas, Eleni Stavropoulou, Stefanos Stefanou and Kiriaki Christodoulou. Administrators are Constatina Passakos and Marina Kipriadis.

The school’s success is because of the unselfish dedication of Prof. Kanellopoulos and his exceptional staff, aided by the Parents Association and the school Board.. The Parents and Teachers Association include:  Calliope Kalantzopoulos, President; Adriana Vlebaris, Vice-President; Kassiani Koukissas Recording Secretary; Vasiliki Chrysikos, Corresponding secretary and the dedicated members of the School Board and Parents Association.