Fifty-two young men of Tarpon Springs, Florida, identically clad in white T-shirt and shorts, had just sprung from boats into Spring Bayou. Following age-old Greek Orthodox Epiphany symbols of baptism and renewal, the cross was flung into the water towards the end of the invocation. On this day in Tarpon Springs the blessing was given by His Eminence the Metropolitan of Atlanta to thousands attending the largest Greek Epiphany celebrations in America.

To a first-time visitor not knowing the town’s history then driving streets lined with Victorian and Arts & Crafts style homes, live oaks dripping with moss and bayous slowly flowing to the Gulf, Tarpon Springs would seem just another beautiful south Florida coastal town.

What’s different was that Tarpon Springs didn’t start out to be the nation’s natural sponge capital. In the 1880s when the railroad arrived wealthy northern investors correctly recognized the region as ideal for water and sports-fishing enthusiasts. The little village around Spring Bayou sprouted with homes for wealthy Northern “snowbirds,” such as the restored Safford House part of the Tarpon Springs Heritage Museum collection.

For centuries sponges were harvested by rake – “hooking” – from shallow “hooker” boats. With productive beds in the Florida Keys the industry was established by the early 1820s. This was fine as long as shallow beds were convenient, but many beds thrived in depths up to 150 feet (46 meters). Deep beds were the standard for the central Gulf Coast, but diving to those depths held significant physical risks.

Despite the industry limitations of hooking, by 1900 Tarpon Springs was America’s most productive sponge port.

Then a Greek arrived. In the late 1890s Tarpon Springs attracted John Michael Cocoris, who had immigrated from the Peloponnese and was working in the New York sponge trade. He formed a partnership with John Cheyney, an early “hooker boat” sponger from Tarpon Springs, with the aim of modernizing the sponge industry.

Over 50 years earlier the hooker divers of the Dodecanese Islands adopted readily to an ever-increasing number of 19th century improvements leading to safer deep diving sponge harvests. Kalymnos Island became the center of Greek deep water sponge diving. Yet deep bed sponging was rare in America and so was the diving gear.

To take full advantage of this lucrative water-based resource Cocoris and Cheyney actively recruited experienced divers from the Dodecanese Islands and imported their improved diving gear. In the first wave of immigration in 1906, over 1,500 divers and workers arrived in Tarpon Springs, many from Kalymnos Island. The Sponge Exchange was built in 1907 – a successful commodities market for this aquatic animal.

It wasn’t just divers; a copious number of skilled workers were employed related to the sponge industry. It’s estimated that at least a dozen jobs were generated per diver and there were thousands of divers. Sponge sorters, machine shops for diving gear to everything connected to the building and maintenance of boats thrived in Tarpon Springs. For over 30 years sponges were the largest industry in pre-World War II Florida designating the city “The Sponge Capital of the World.”

The town even survived the temporary collapse of the sponge industry in the late 1940s due to Red Tide infestation. Yet by the late 1970s many beds had recovered reviving an industry that still exists today, although scaled back. Visitors can often view sponge fishermen working at the Sponge Docks.

The hiatus from active sponge diving was not “lost years” in Tarpon Springs. Boasting ideal boating and beach destinations on Florida’s Gulf Coast, the region remained a south Florida favorite. The Sponge Docks are the tourist center with Greek restaurants, artists, sponges and crafts. 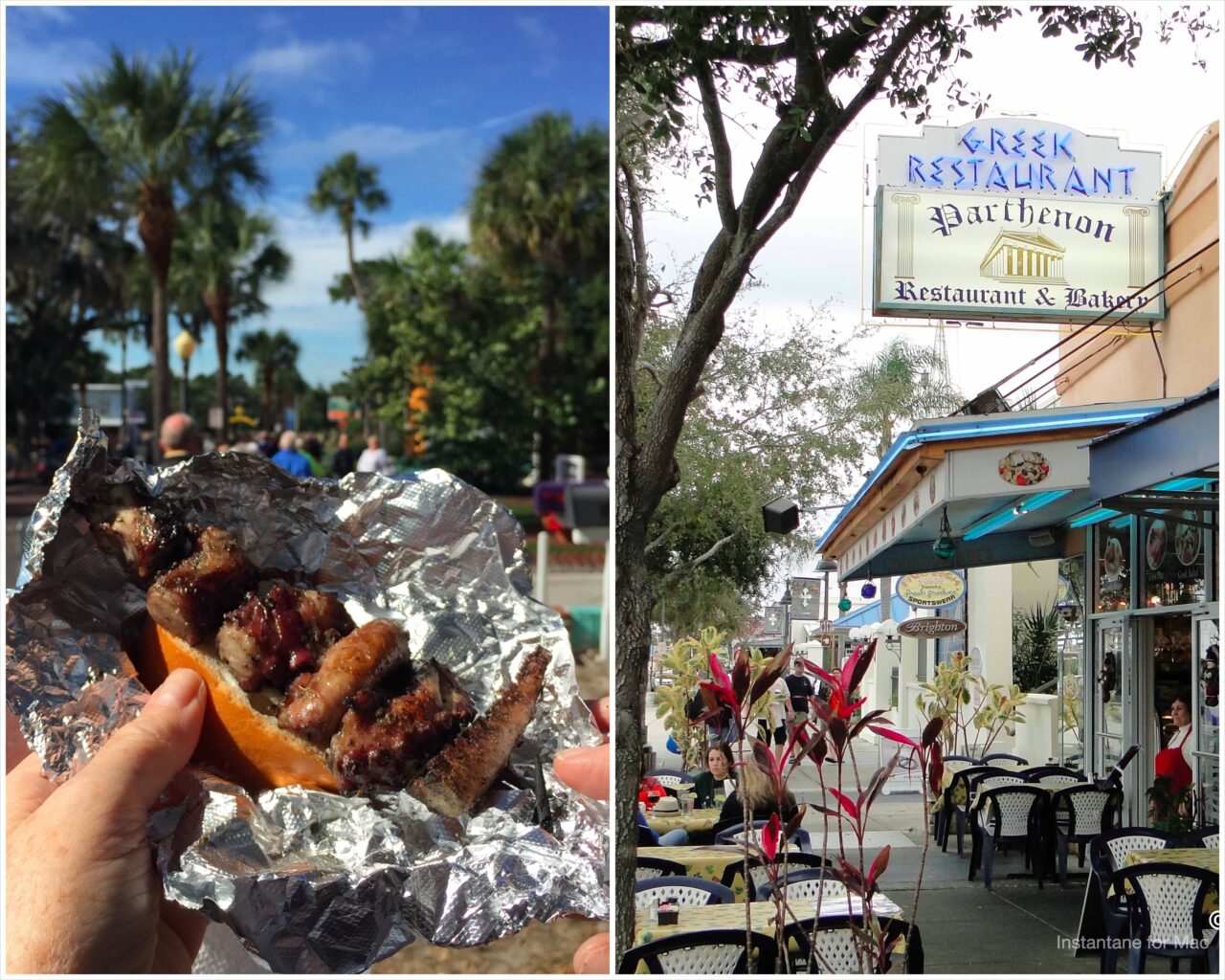 A variety of Greek festivals and cultural events take place throughout the year, but it’s the Epiphany, January 6, that projects the depth of Hellenic influence. Many restaurants and some of the town’s antique and boutique stores remain open, banking that some of the thousands of visitors to the Epiphany festivities will wander in. But for most this is a celebration of community, a day for Greek pride.

Street vendors selling tender souvlaki, and light loukoumades sticky with aromatic honey were on hand while the Metropolitan led the Epiphany liturgy, which was amplified to the streets outside the packed Cathedral. At the conclusion of the liturgy a procession slowly made its way through downtown toward Spring Bayou. Besides the city and church dignitaries, there were the children and adult dance and cultural groups dressed in traditional clothing and the young men – teens to early 20s – dressed in white Ts and swim shorts who will participate in the day’s main event. 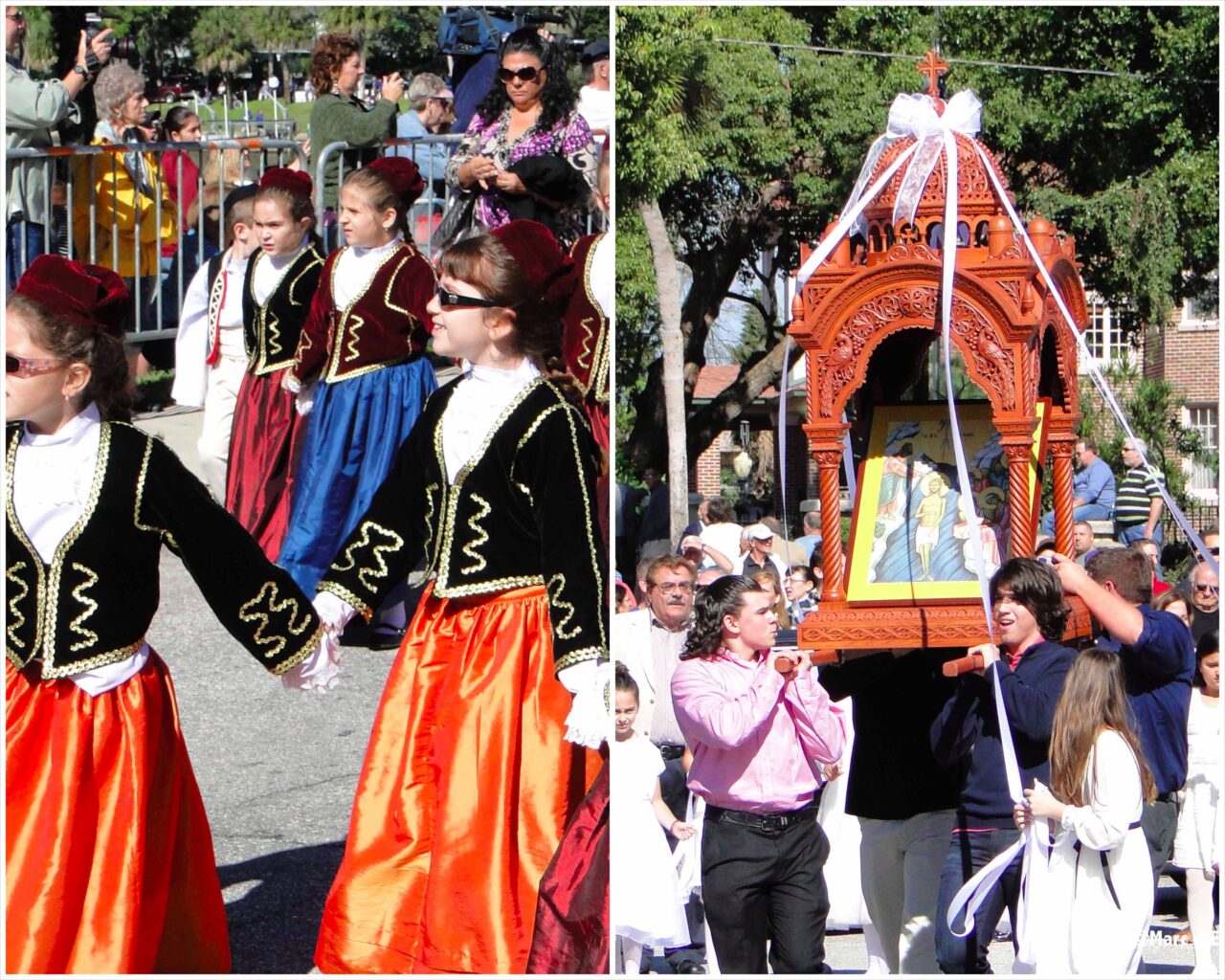 Spring Bayou was the site of Tarpon Springs earliest settlement in the 1820s and by the 1890s had become, and remains, the most desirable neighborhood. Beautiful Craig Park banks the bayou. On January 6, a small semi-circle of white dories was anchored just a bit offshore from the gazebo at the dock of Craig Park. People lined the grassy bayou shore, some having arrived hours earlier to snatch a prime view. Greek was spoken as frequently as any other language.

Shortly after the arrival of His Eminence the Metropolitan at the gazebo the group of 52 young men jumped into the bayou and frantically swam towards boats each one considered best situated within the semi-circle. In a fury of muscular bodies up to ten swimmers attempt to scramble aboard each boat without it capsizing. Standing now wet in the boats, a bit chilly even in Florida January weather, a lengthy invocation was intoned (long benedictions are the norm in Greek Orthodox liturgy, the Metropolitan wasn’t stoking anticipation.)

For centuries it has been a great honor for the young men of a Greek village to participate in the Epiphany ceremony of diving for the cross. Participants will try every year from mid-teens until their early 20s to grasp the illusive cross under water. The anticipatory tension is palpable both among the many family spectators and the taut muscles of the swimmers ready to dive for the cross at the given cue.

The given cue was not predictable. A priest among the Metropolitan’s entourage on the gazebo will throw the white cross at some point as prayers are concluding. With bodies and cameras ready, the swimmers suddenly leap as the cross arches over the bayou and sinks. Like giant fish that still make the region home, the frenzy in the water ends as quickly as it starts as one hand thrust out of the bayou with the cross and the blessing of good things to come during the New Year.

Festivities continued in the huge modern St. Nicolas Cathedral Community Center with a full array of favorite Greek foods – preparations had been going on in back of the center since early morning. Private parties, special music events in Tarpon Spring’s taverns and the town’s Greek restaurants would be especially busy well into the evening.

Tarpon Springs may be in Florida, but the sponge divers arrived as proud Greeks, experts in their trade. Today that entrepreneurial confidence, combined with good Greek food and deep faith, keeps Hellenic heritage alive. Perhaps even the gods leave Mt. Olympus in winter for a little southern Florida sun … just a thought.

In 2007 and 2008, the City of Tarpon Springs established Sister City relationships with Kalymnos, Halki, Symi, and Larnaca, Cyprus.

Pinellas Trail For bicycle and hiking enthusiasts, a section of this 47-mile rail-to-trail runs right through the historic downtown.

The Court of Two Sisters has a quality selection of antiques and vintage furniture.