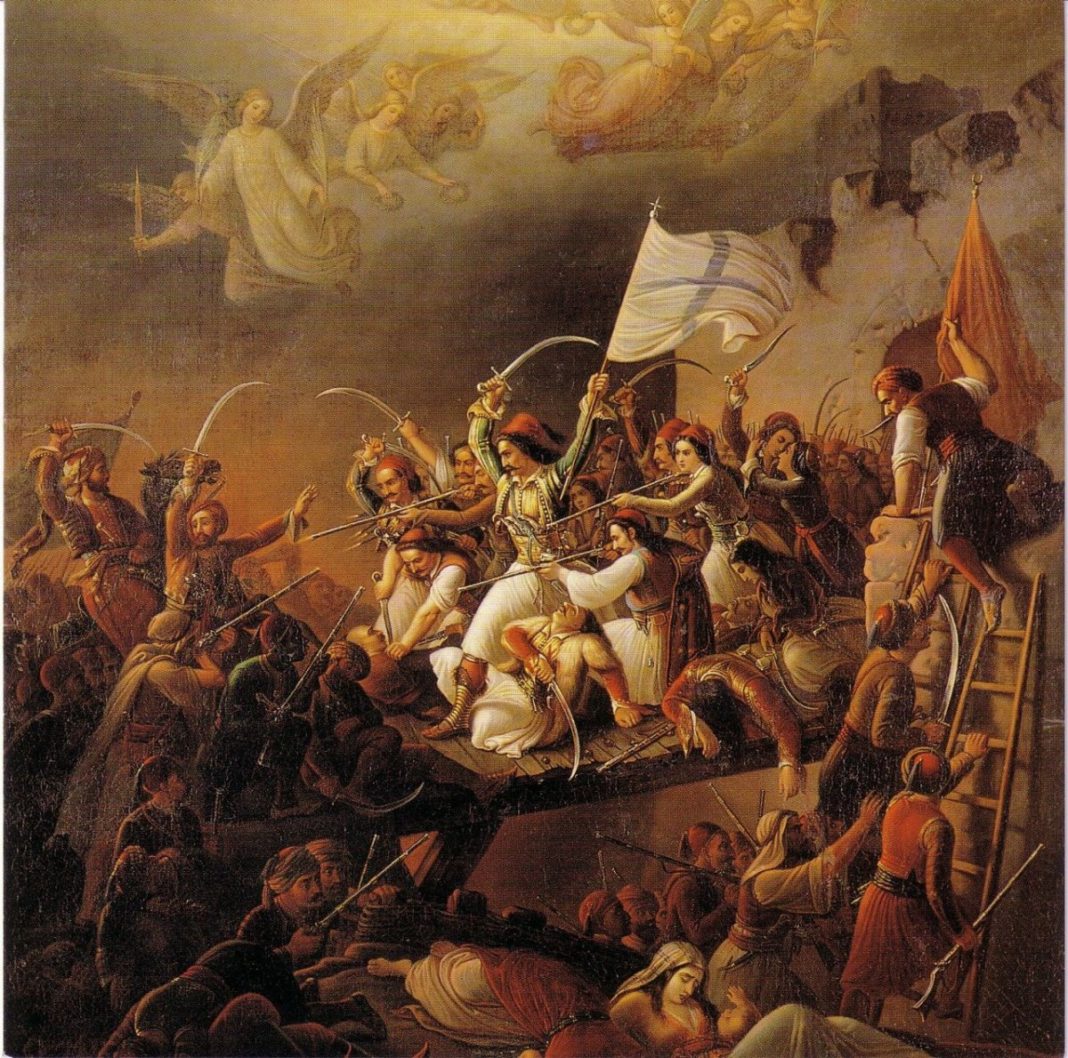 The struggle of the enslaved Greeks against their ruthless rulers, the Ottoman Turks, officially started on the 25th of March 1821 in the monastery of Hagia Lavra, Kalavryta. Germanos, the bishop of Paleon Patron, raised the banner of the revolution and blessed the arms of the captains of the revolting Greeks. The beginning of the revolution coincided with one of the holiest days for Orthodox Christians, the Annunciation of the Theotokos. Unofficially though, the revolution of the Hellenes against the Ottoman Turks started one day after the fall of Constantinople on the 29th of May 1453, and continues until today. However, about 20 actual unsuccessful uprisings took place before the 1821 revolution that managed to liberate about 25% of the Hellenes residing in the Ottoman empire. The culturally superior Hellenic world, as represented by the Eastern Roman Empire, also known as Byzantine Empire, in 1453, fell to the nomadic Asian Turk, and further failed to civilize and assimilate this new conqueror as it had previously done with the Romans. The Moslem Turk adopted the material part of the Byzantines but not its Hellenic intellectual and cultural heritage. Under penalty of death, no Turk could be Christianized but many Christians, for their survival, converted to Islam. Thus, the probability that many of today’s Turks are descended from the Greeks is high. During the 400 years of Ottoman occupation  complete lack of schooling resulted in illiterate, superstitious and ignorant Hellenes (especially in their culture, history and language). Interestingly, the same Turkish policy continues today with the Kurds!  systematic abduction of Christian children forming the infamous and cruel Jenisaries, faithful only to Sultan  moderate religious freedom was granted to those minorities who accepted the Sultan as their despotic leader and paid their taxes  churches were turned into mosques and icons were destroyed (usually by poking out the eyes of the depicted saints, as it is happening in the conquered north part of Cyprus today, at the end of the 20th century). However, the Hellenes living in the occupied Hellas reacted to the oppression, lack of education and freedom by  continuous uprisings against their Ottoman overlords (kleftes and armatoloi were a continuous headache for the Turks)  obtaining elementary education in the Hidden Schools (for reading and writing only), formed and covertly operated by the church (at the same time the Europeans, through the discovery of Hellenic classics, began the renaissance, after many centuries of darkness)  always being reminded of their glorious past and the contribution of their ancestors to the world by the surrounding ruins of ancient temples, theaters and stadia; thus keeping their historical identity alive  becoming successful international ship owners and merchants (Turks were not very successful as sea merchants, thus bringing the European ideas of democracy and freedom back to the enslaved Hellenes and at the same time informing the Europeans of their struggle (AGON) for independence and human dignity–the contributions of the fleet of Spetses, Hydra and Chios were of extreme importance to the success of the revolution. The struggle of the Hellenes for independence was coordinated from abroad. The Hellenes of Diaspora were the strategic and financial brains behind the revolution (Secret Society of Friends [Filiki Etaeria], Sacred Band [Ieros Lohos], Ypsilandis, Koraes, Kapodistrias and many others raised the interest of the European and American intellectuals and Phil-Hellenes (Lord Byron, Dr. Samuel Gridly Howe, and Daniel Webster to name a few) The Hellenes of mainland Hellas formed military groups and carried out most of the burden of the fighting against the Ottoman Turks in Hellas; Kolokotronis, Karaiskakis, Papaflessas, Androutsos, Botsaris, Bouboulina, and Miaoulis were some of the heroes and military leaders suffered most of the consequences of their revolution against the Turks (burning of Chios and Psara) proved to the enslaved peoples of the Balkans (Aemos peninsula) that the Ottoman army was not invincible through their determination and self-sacrifice (Souli, Alamana, Messologi, Maniaki) they achieved significant victories over the Turks, thus liberating within 2 years Attica, Peloponnese and Sterea Ellas, which comprised in 1823 the first free Hellenic State forced the allied victory at the battle of Navarino, 1828, thus accelerating the demise of the Ottoman Empire The Holy Alliance, comprised of Austria, Russia, England, France, and Germany, tried to put an end to the revolution. The revolting Hellenes had been characterized, mainly by the Austrians, as agitators or terrorists using today’s language. However, their fight for independence inspired many Europeans Phil-Hellenes, who gave their life for their righteous struggle. It is worth mentioning that there were Phil-Hellenes from every European nation except Austria and Czarist Russia (however, the Ieros Lohos (Sacred Band) was formed in Russia) . The struggle of the Hellenes for Independence eventually resulted in the demise of the Ottoman Empire and the liberation of the enslaved Balkans (Haemus Peninsula) from the Ottoman yoke–it is also worth mentioning that the only people in the Balkans who fought against the Ottoman Turks were the Hellenes, something never forgotten by the contemporary Turks, and the creation of the contemporary Hellas State, an oasis of peace, democracy and stability, not only in the Balkans but in the Eastern Mediterranean as well.