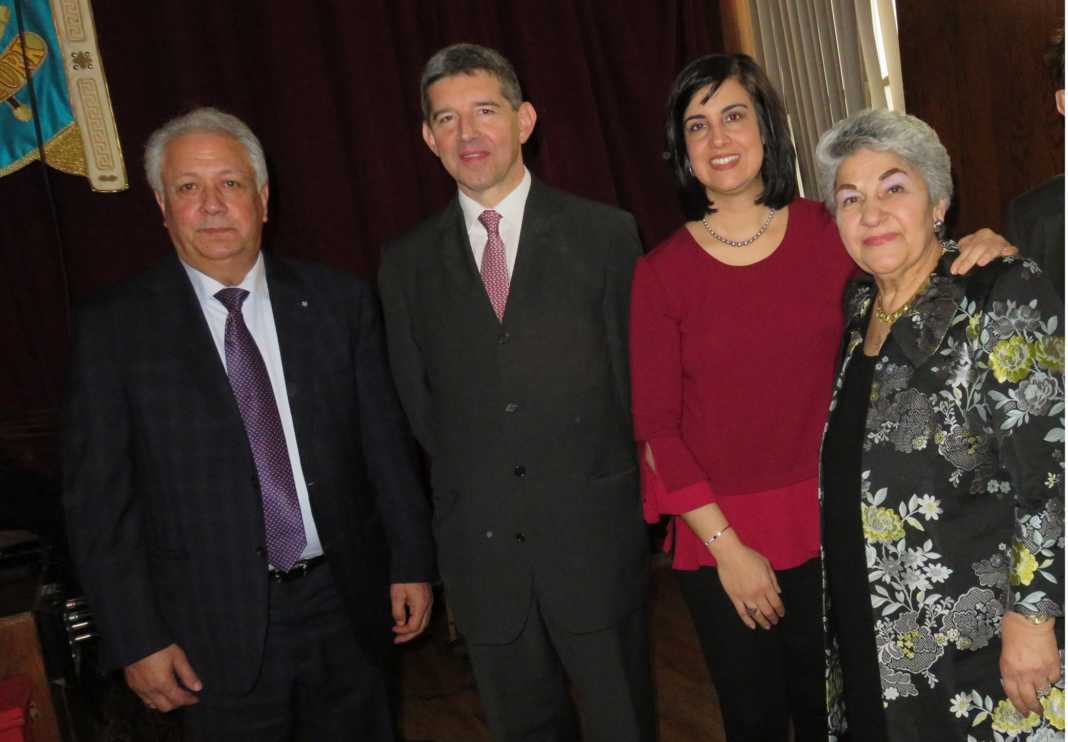 “The very spring and root of honesty and virtue lie in good education,” Plutarch

February 9, 2019, has been declared an international Greek language day in hopes of sparking interest in the language worldwide. The date coincides with Commemoration Day of Greece’s national poet, Dionysios Solomos, whose lyrics are featured in the Greek National Anthem.

The Greek-American Teachers Federation, the Department of Greek Education of the Greek Orthodox Archdiocese of America, the “Hellenic Paideia” of America with the support of the New York Greek Teachers Associations-members of the Federation organized a day of celebration-luncheon on Sunday afternoon, March 10th, at the Stathakion Cultural Center, 22-51 29th Street, Astoria, New York, to honor the Hellenic language declared as “an international language” by the UNESCO and Greece at the Over two hundred persons attended to support the continuation of the Greek language, culture and Greek Orthodox faith. The Honorees were Reverend Protopresbyter John Antonopoulos, Dr. George Tsioulias, Mrs. Vasiliki Filiotis and Mr. Stavros Haνiaras.

The following awards were granted to each Honoree: The Greek-American Teachers Federation, the Department of Greek Education of the Greek Orthodox Archdiocese of America “Historic Hellenic Language Award” and Senator Michael N. Gianaris “Certificate of recognition. Assemblymember Aravella Simotas Citation read: “Whereas, a great state is enhanced by individuals who serve their communities with humility and distinction. Which is truly the lifeblood of the community and the state, so often goes unrecognized and unrewarded: now, therefore be it Resolved, that as duly elected members of the New York State Assembly… we have an outstanding citizen, one who is worthy of the esteem of both community and the great State.”

Education is about children. Many were enjoying the children’s choir of Holy Cross School that was shortened dramatically. Panagiotis Kokolis, American born who speaks fluent Greek, stayed up all night practicing his recitation of “Mantinada” (Cretan poem). He did not recite it, because of programming changes. We were disappointed. The children should sing and recite poems first.

Stella Kokolis accomplishes projects with enthusiasm and dedication. Her enthusiasm is legendary that explains how she is able to achieve success. We all came in rainy for Mrs. Stella Kokolis and Mrs. Vasiliki Filiotis. No one else! She has tried to help everyone. Reaching out to the people of the Greek-American community for decades. Mrs. Kokolis is not a transplanted intellectual from Greece. She feels it is her duty to nurture the values of the Greek language and culture that are rapidly disappearing in the United States. An intellectual with multiple degrees, she has kept our Greek legacy alive.

President Kokolis of the Federation of Hellenic-American Educators & Cultural Associations of America has established a chapter in Philadelphia, Pennsylvania, Clearwater, Florida, San Jose, California and Toronto, Canada. She was worked in cooperation with education chapters of New York City. “Let us reflect on the admirable work that the teachers have devoted to their students through the decades,” she said. “With courage and perseverance, let us continue to kindle the light of Hellenic education.” She is a graduate of the Panteion University of Social and Political Sciences in Athens and holds graduate degrees from the School of Education of Columbia University. Her generosity is legendary. When someone needs funding for a project or a scholarship for a student, Mrs. Kokolis gives money from her own pocket.

President Demosthenes Triantafillou, President of the Greek Teachers Association Prometheus, donated $1,000 to The Federation of Hellenic-American Educators & Cultural Associations of America. He is cementing harmony and cooperation between all Greek educators’ Association.

When one talks to a person from St. Demetrios Cathedral, one often hears that the person was baptized by Rev. Fr. John Antonopoulos. He is the only priest who has remained in Astoria since the 1960s. Dedicated, trustworthy and one to be counted on to come through in a crisis are descriptive terms of his unique ministry. Now, he has the new title of writer/historian with his three books based on primary sources. “The wise men and great teachers say the humble support society,” said Very Rev. John Antonopoulos. “The church community is supported by the unknown and unseen deacons.” For more information on his books, contact Antonopoulos Funeral Home, at (718) 728-8500.

Honoree Dr. Tsioulis said. “We must teach, reach and motivate Greek American children, one needs to understand their environment, the school systems they attend, their own culture, traditions and habits. Teachers of the Greek language must integrate modern technology, such as the internet in their classroom, as well as use the language of the students for motivation. Grandparents, Parents and families must play a significant role in inspiring the students to learn Greek language and culture. Culture activities such as theater, dance, music and visits to Greece can help curb the dropout rate of Greek students from the Greek schools.”

President Filiotis believes “Greek continues to communicate ideas, thoughts and the arts. Parents must redefine their own ethnic identity, expressing their belief in the Greek cultural achievement. They must come forward to offer their time and talents to perpetuate the Greek Legacy. Greek education’s purpose is to provide students with the tools to become their own teachers throughout their life. They will think critically and independently, uplifting their minds. We must study Greek in order to prevent our own decline. Greek is the language of the bible and the basis of Christianity. It is the obligation of parents to support education of Greek language that will transmit these truths.”

Stavros Haviaras is a founder of the Chian Federation. His granddaughter Markella Mallas with her family, my former student Nicole Arnitsis family and many friends were there to honor him. I personally worked with Mr. Haviaras in granting Greek scholarships for my students at a LOCAL UNIVERSITY. He is a larger than life figure who wants the next generation to love Greece and his island of Chios.

Mr. Haviaras is an active member in the  Greek Orthodox community. He is αn Archon of our Ecumenical Patriarchate, Order of Saint Andrew.  He continues to serve on the board of Kimisis Theotokou Greek Orthodox Church, for the past 35 years, where he served as president for over 10 years. The honoree is also α member and served as president of both the Chian Federation and the Dafnonas Chios Society. The Archon (Prince of the  Church)  continues to be involved in the community to keep our Greek culture and heritage alive.

In its press release, regarding this year’s celebration, the Greek Ministry of Education writes: “It is important to learn and love the Greek language, because of its virtues but mainly because it has expressed a great culture, that shaped and codified the first and statutory layer of the upper vocabulary and the basic concepts of Western civilization. Over the centuries, its contribution has been decisive as a means of enhancing and spreading Greek culture and today, it is considered as one of the world’s oldest languages”.

The press release continues saying “The celebration was formulated by the Federation of Greek Communities and Fraternal Organizations of Italy in 2016, and continues to spread worldwide for the third year in a row.” Education Counselor Georgios Kosyvas stated, “This day is expected to highlight the constant contribution of the Greek language to the development of the European and international culture. Our aim is to promote and disseminate the Greek language trying at the same time to render its projection and reinforcement an issue of paramount importance, both for the Greek schools and for the international community.”1

A country cannot exist without its history in education. “Has a philosopher like you failed to discover that our country is more to be valued and higher and higher and holier far than mother or father or any ancestor, and more to be regarded in the eyes of the gods and of men of understanding?”, said Socrates (469-391 B.C.) in “Crito”,  dialogue by Plato.