The Best Reason Yet to Eat Your Veggies 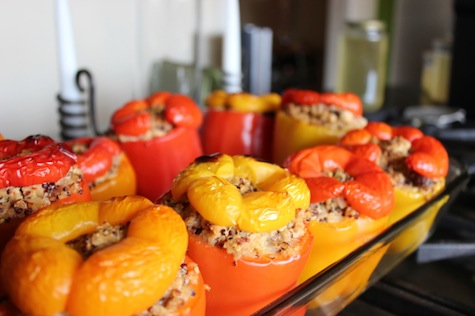 More From Rodale News: Eat 5 Servings of Fruits and Veggies to Live Longer

Surveying 14,000 participants, the researchers found that, of the people who reported high mental well-being, 34 percent ate five or more portions, versus only 7 percent who ate less than one portion. Interestingly, the only other behavior that had a significant correlation to well-being was smoking (with higher smokers having lower well-being).

“Along with smoking, fruit and vegetable consumption was the health-related behaviour most consistently associated with both low and high mental well-being,”said Saverio Stranges, PhD, researcher from the Statistics and Epidemiology Unit, Division of Health Sciences, at University of Warwick Medical School in England. “These novel findings suggest that fruit and vegetable intake may play a potential role as a driver, not just of physical, but also of mental well-being in the general population.”

It’s unsurprising then, given plant-based food’s ability to make us happier and healthier, that vegetables are a major staple in Ikaria, the Greek island where people “forget to die.” Diane Kochilas, author of Ikaria, explains that these people make sure that vegetarian dishes are still well-balanced meals, saying, “People [in Ikaria] take for granted the inordinate number of dishes that are main courses, plant-based and wanting in nothing so far as flavor, variety, and substance, because these dishes have always been and still are their daily sustenance.”

Directions:
1. Slice off the top of each tomato with a very sharp knife; keep each vegetable and cap together. Using a teaspoon, gently scoop out the pulp of each tomato, being careful not to tear the outer skin. Leave a shell thick enough to hold stuffing (about ½ inch). Pulse the pulp in a food processor until smooth. Set aside.

2. Carefully slice off the tops of the peppers, leaving the stems intact. Remove the peppers’ seeds with a spoon. If desired, using a paring knife, trim away the inner ribs, which can be tough when cooked.

3. In a large heavy skillet, heat 2 tablespoons of the oil over medium heat. Add the onions and cook, stirring, until translucent and soft, about 10 minutes. Add the rice and stir frequently for 3 to 4 minutes. Add the tomato pulp, garlic, raisins, and water. Reduce the heat, cover the skillet, and simmer until the rice is softened but not cooked and most of the liquid is absorbed (the mixture should be moist), 15 to 20 minutes. Season the stuffing with salt and pepper and toss in the herbs.

5. Stuff the vegetables with the rice filling and crown with their own caps. Place in a baking pan. Add a little water to the pan (about ¼ cup), drizzle the remaining 2 tablespoons of oil over the vegetables, and bake until the vegetables are soft and blistery and the rice is cooked, 1 to 1½ hours. Baste with pan juices during baking. Serve hot or cold.