Event Honors the Work of The Coca-Cola Foundation

NEW YORK CITY, September 9, 2019 — The Hellenic Initiative (THI), which leads the Greek Diaspora community internationally in raising awareness and capital for Greece, is hosting its 7th Annual Gala to raise funds that will be invested in entrepreneurial programs in Greece. The Gala also will support Greek NGOs that foster economic development opportunities and provide crisis relief for underserved communities in Greece, particularly children. Last year’s Gala raised more than $2 million making it the most successful fundraising event in the Greek Diaspora globally. 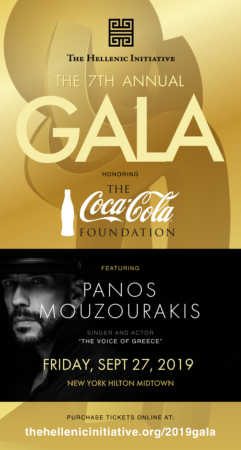 EMCEE/ENTERTAINMENT:  Panos Mouzourakis, the award-winning Greek artist, singer, songwriter, and actor, will perform. He has been on the jury of “The Voice of Greece” and gave voice to the Greek version of Olaf in the film “Frozen.” He also appeared in last year’s romantic comedy, “Mamma Mia! Here We Go Again.”

WHAT:  Founded in 2012, THI is a global, nonprofit, secular institution mobilizing the Greek Diaspora and Philhellene community to support sustainable economic recovery and renewal for the Greek people. THI’s programs address crisis relief through strong nonprofit organizations and build entrepreneurial skills in a new generation of business leaders.