CommunityChurchOn the Trail in Greece: Greek Gold from Russia at Acropolis Museum
Church

On the Trail in Greece: Greek Gold from Russia at Acropolis Museum 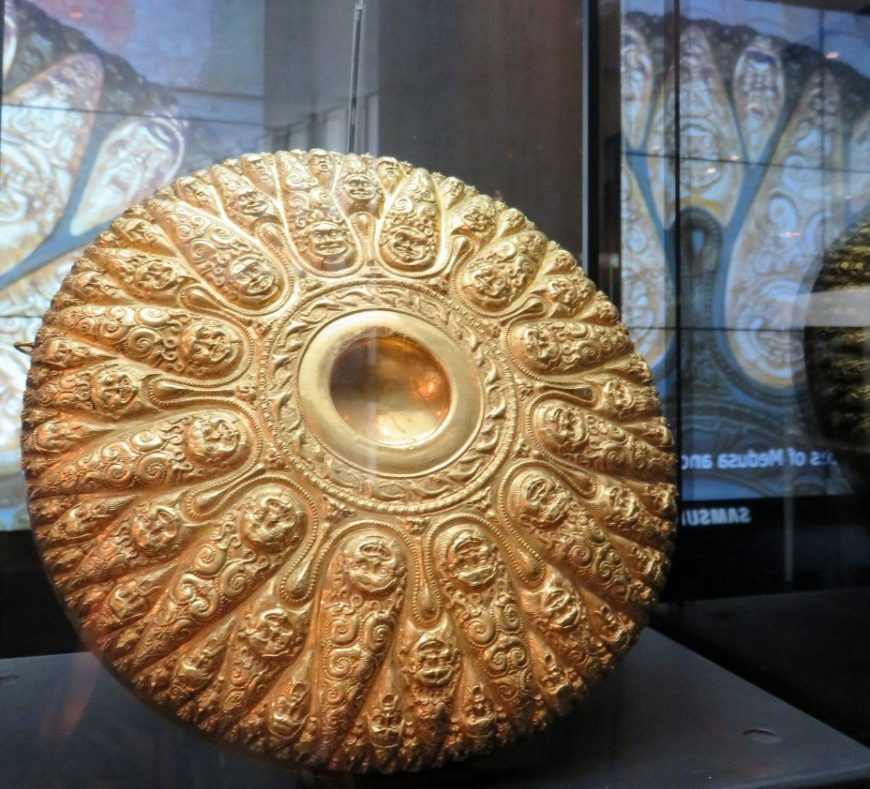 President Vladimir Putin’s May 2016 visit to Greece began the “Year of Greece and Russian Cultural Events”. The traditional bonds of friendship and collaboration between the two countries gave hope to a country and people really suffering. I was in Athens in May and June 2016 and saw the excitement of culture and Tourism with Russia, in the midst of the resettlement of Middle Eastern refugees. “Scythian Heralds” from the Hermitage to the Acropolis Museum” is the archaeological exhibition providing the Greek and Russian public with the opportunity to become acquainted with cultural aspects of both countries. A gold necklace. Golden phiale and golden vessel (vase) from the royal tumulus (tomb) of the Kul Oba in Crimea, Black Sea Coast was lent.

I was in the Hermitage in late autumn 2015, witnessing the Greek Gold of the St. Petersburg Museum. I was amazed by the Greek culture of the Black sea coast. I witnessed three objects, of the 4th century from the Scythian royal grave of Kul Olba in the foyer of the Acropolis Museum. This exhibition was free to the public. When I was there in June 2016, tourists passed by the exhibit quickly. Guides did not explain it. Everyone was in a rush to see the Acropolis Museum’s treasures. No one realized the significance. I was in the Hermitage. I knew this was “Greek Gold” rarely seen in the West.

“The study of antiquities in Russia is closely linked with the study of the Northern Back Sea coast….but the situation changed after the discovery in 1830 of a vault in the Kul Oba burial-mound near Kerch…The objects found in the vault were sent to the Hermitage and formed the beginning of the museum’s archaeological collection.”1

“Greeks who built cities in the Bosporus two and a half millennia ago settle there next to barbaric tribes, who had been living in the territory for ages and whose way of life was quite different. Their interaction resulted in a peculiar type of culture that took shape in the ancient cities and had a great impact on the style of local artists. Features of this symbiosis are preserved in many works of jewelry, particularly those discovered in the tombs of prosperous citizens and aristocracy of the Kingdom of Bosporus and burial mounds of tribe leaders who had adopted Greek tastes.”2

The gold necklace ending with Scythian riders show the style of Greek art of 5th century B.C.  Horsemen on a relief frieze in the Parthenon served as examples for gold art.3 The golden vessel shows how the Greeks viewed their neighboring Scythian warrior tribes.

I was impressed with the flat phiale which is a major treasure. It was found in a male burial of Kul Oba. “The surface has rows of drop-shaped protuberances resembling the petals of an open lotus flower. They are all covered with relief depictions: Gorgon heads with snakes wriggling around them, bearded heads with pointed hats, heads of wild boar and panthers. All this is interspersed with personifications of two elements- water and air: fish and dolphins frisking in the waves on the frieze around the omphalos and a row of reliefs of bees under the smooth edge of the vessel.

Phialai were used by the Greeks mainly in religious rituals. For the Scythians, as far as can be judged by references in Herodotus, the phiale was linked with royal customs, being one of the symbols of power (Herodotus, IV, 5, 9-10, 71). With the loops, quite roughly soldered to the side of the vessel by a local master, the phiale could be hung from a belt, denoting the high status of its owner.”4

The “Scythian Heralds” exhibit from the Hermitage at the Acropolis Museum shows the life of the aristocracy of the Kingdom of Bosporus (Black Sea coast), which consisted of Greeks and members of the local tribal nobility who had adapted to the Hellenic Way of life. They were clients and consumers of the production of Greek masters. This exhibit will run to October 2, 2016 at the foyer of the acropolis Museum in Athens, Greece.

Photo1 – flat phiale which is a major treasure