GreeceCultureTraditional Greek Wedding Held through the Streets Leading to a Greek Orthodox...
GreeceCulture 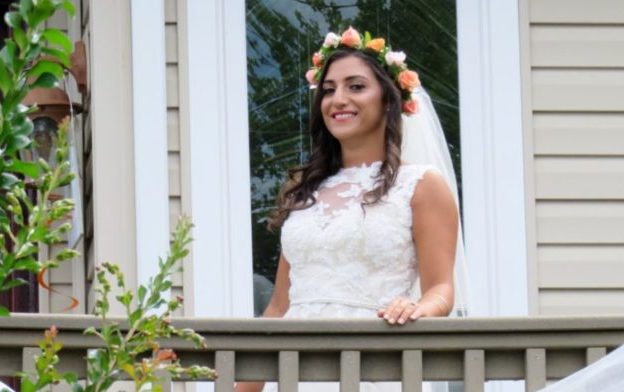 Eva Constantine of Mattituck, New York and Daniel Fiorentino of Frankfort, New York had a traditional Greek wedding on Saturday, August 20th, 2016. The procession through her neighborhood streets led to the ceremony performed by Rev. Constantine Makrinos at the Transfiguration of Christ Greek Orthodox Church on Breakwater Road, Mattituck. A violinist and a luto musician serenaded the bride from her home with songs such as “I Nyfi Pantrevi” (the bride is getting married). A carriage driven by two horses made their way with music and happiness. This is a tradition celebrated in villages of Cyprus. This is the first time such a wedding procession has been celebrated in the rural hamlet of Mattituck, located on the East End of Long Island. The community was invited to celebrate with champagne immediately following the religious ceremony conclusion on the church grounds. The wedding reception was held at the Vineyards Caterers in Aquebogue, New York. In honor of the groom’s Italian background, guests will be serenaded through dinner by a Frank Sinatra performer. 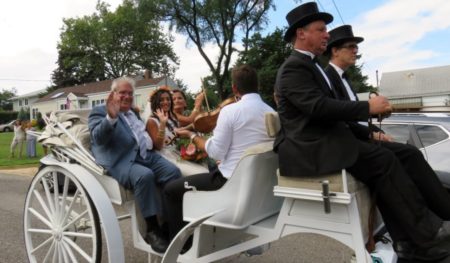 The Bride’s parents are Emanuel and Amal Constantine. Mr. Constantine, a retired businessman, is of Cypriot descent. His father, Thomas, is from Asgata, Cyprus and late mother, Loula was from Kyrenia, occupied Cyprus. The bride’s father is Parish Council Vice-President of the Transfiguration of Christ Church. His grandfather, Haralambos Constantine, was a founder and original member of the Greek-American pioneers who created the first Greek Orthodox Church on the East End in the late 1960’s. Emanuel Constantine is continuing his family tradition of community service. Mrs. Amal Constantine is from Beirut, Lebanon from the Christian community. The groom’s parents, Dennis and Doreen Fiorentino are from Frankfort, New York. Mr. Fiorentino is a landscaping business owner. Mrs. Fiorentino is Franfort village treasurer.

Photo 1 – Bride Eva Constantine, parents and Greek musicians in horse and buggy on the way to church.