Ukrainian children to be hosted in summer camps arrive in Athens, Thessaloniki 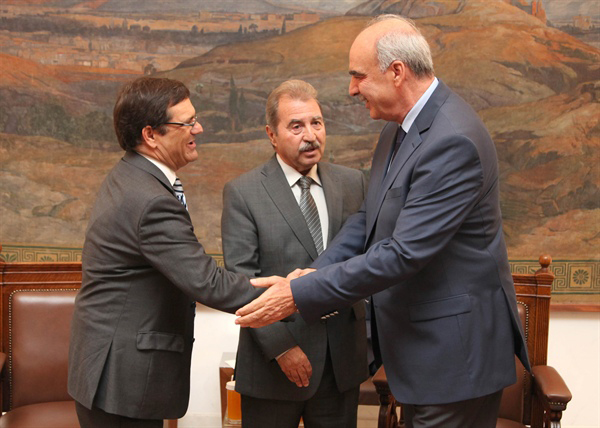 And now for the benefit of my colleagues and in necessity to be able to clearly express myself, I will transition to English.

I am proud that with me on this trip we have Representative Gregory Meeks from New York, Representative Michelle Bachman from the great state of Minnesota and Representative Jack Kingston from Georgia. And they are all proud political leaders. We all send the warmest greetings from the United States House of Representatives.

I learned the importance of public service from my father Michael Bilirakis. And my father was born in Tarpon Springs, Florida and served in Congress for 24 years prior to me. During his tenure in our nation’s capital my father co-founded and co-chaired, the Congressional Caucus on Hellenic Issues. He handed that legacy to me and I am proud to serve in a capacity that helps foster the relationship between the U.S. and Greece.

And I know my colleagues will tell you, that I never ever miss an opportunity to speak proudly of my Greek heritage in Congress. They hear it over and over and over again.

It’s a blessing to me that I have the benefit of being born and raised in the United States and having a Greek heritage so rich in tradition and culture.

The ties between our two nations are historic, political, economic and cultural. They are rooted in a common heritage, mutual respect and shared values.

Classical Hellas, the cradle of Western civilization, inspired America’s founding fathers to build a system of government drawing from the ancient Greek model of democracy. Similarly, the legendary heroes of the 1821 Greek War of Independence were inspired by the brave revolutionaries who fought America’s War of Independence almost half a century earlier in 1776.

From Theodoros Kolokotronis, the leader of the Klephts, to the fiercely patriotic women of Suli, to the legendary Athanasios Diakos, these brave souls fought and died for the cause of freedom rather than live their lives in chains. Their battle cry, “Eleftheria I Thanatos.” Our Greek ancestors earned their liberty with blood as did our American forefathers. The freedoms we enjoy today is due to the sacrifices made by men and women in the past.

The historic sacrifices for liberty only helped to enhance the modern day link between our peoples. Our two countries have stood by each other at many hours of need. During World War II, for instance, we marvel recalling that the small, ill-equipped population of Greece was willing to take on the full force of the fascist forces and turn the tide of war that ultimately saved the world from tyranny when Prime Minister Metaxas dared to say OXI! to the crushing fascist armies.

It is the reason why Winston Churchill said of the Greeks: “Today we say that Greeks fight like heroes, from now on we will say that heroes fight like Greeks.”

After World War II, the United States contributed hundreds of millions of dollars to rebuild Greece’s buildings, agriculture and industry as part of the Marshal Plan.

The United States and Greece then became partners in NATO and the bonds between them have been strengthened by our joint participation as allies during the Korean conflict, the Cold War, and the ongoing War on Terror.

The US views Greece as an important partner on many policy priorities, a leader in the region, and an ally in promoting stability, economic development in the Eastern Mediterranean and supporting the diversification of Europe’s energy supplies.

That’s why, on the 25th of each March is proclaimed annually by the President of the United States as Day for the celebration of Greek Independence from the Ottoman Empire. It is fitting that Greece is the only country for which such a special honor is annually reserved by the White House since, as Thomas Jefferson once noted, “To the ancient Greeks … we are all indebted for the light which led ourselves … American colonists, out of gothic darkness.”

And it is on the shoulders of giants like Thomas Jefferson and George Washington for Americans and Kolokotronis and Admiral Miaoulis- my mother would be very proud because her maiden name is Miaoulis- that I work to keep the spirit of our ancestors alive in the United States Congress through the Congressional Caucus on Hellenic Affairs. My work in the Caucus cultivates stronger relations between Greece and the United States by bringing a renewed congressional focus on key diplomatic, military, and human rights issues in a very critical part of the world.

We will not rest until Greece is safe from provocative threats in the Agean. We will not rest until our Ecumenical Patriarch Bartholomew is free in the Fanar and religious freedom is granted to all who reside in Turkey, including the opening of the theological school in Halki, which has been closed for over 40 years.

Additionally, I am proud to have founded and co-chair the Congressional Hellenic-Israeli Alliance. This group of Representatives is similarly dedicated to focusing on issues related to the United States, Greece, Israel, and Cyprus. Although this Caucus is less than two years old, we have held policy discussions on issues of mutual concern to the entire Eastern Mediterranean region such as common defense strategy, tourism, energy cooperation and religious freedom challenges.

I applaud Greece and neighboring Cyprus for their unwavering support of the international coalition to combat ISIS. No person should ever be pushed from their ancestral homeland just because of their religion. The barbaric murders of religious minorities showed the true colors of radicalization that must be defeated at once.

I look forward to growing these caucuses so that we can be in a position to help Greece as you climb your way out of economically difficult times. The United States has expressed consistent strong support for Greece’s ongoing efforts to restore fiscal stability, implement structural reforms, recover competitiveness and restart growth.

I am especially impressed with the bipartisan nature of your government. I hope that it continues to flourish and stand as a model for governments worldwide.

I am encouraged by your growing GDP numbers. Although the last six years have been wrought with strife and sacrifice, the recent gains in the export, tourism, and infrastructure industries are an impressive step in the road to full recovery and economic self-sufficiency.

I am here with members and staff from the House of Representatives Energy and Commerce Committee. I am also a member of the Energy and Commerce Committee and I sit on the sub-committees on energy. So naturally we are focusing a lot of our attention on regional energy initiatives and the future of energy cooperation on a global scale. I am excited to hear of the planned construction of the Greek segment of the Trans Adriatic Pipeline, connecting natural gas reserves in the Caspian Sea to European markets. The direct investment and employment boost from the pipeline production should help make cooperation in these initiatives more attractive to other similarly situated countries.

There are indications that the worst of this economic situation has passed. I am glad to see that tourists are returning to Greece, for two years in a row. My entire family and I were among these tourists from the United States. We came last summer to visit the home of my great grandfather on the island of Kalymnos which still exists and is still owned by the family. And we also visited my wife’s ancestral home in Ethyros and to introduce our four children to the wonderful culture and have them visit and meet and so forth the modern life of Greece because it’s so very dear to our hearts.

I was also thrilled to see that some businesses in central Athens are slowly beginning to reopen and that the public sector is gradually becoming more efficient and more responsive to the citizenry.

All these are very positive signs showing that the many sacrifices, and I know there were many and I know they were difficult times- I hear it. You know I can’t put myself in your place because I’m not here in this country full time, but I know the sacrifices and I’ve heard them from our friends and relatives over the years. The sacrifices the Greek people made in the last few years have not been in vain and that Greece is on its way to a complete recovery.

While similarly minded democracies, let the United States and Greece work together on local issues of security and economic stability. Elected officials, like us, owe it to our countries to rise above politics as usual, to forge a better future for our children and for the world.

I hear stories, again from my relatives in Greece, who tell me of the resilience and optimism of their neighbors and friends and it definitely inspires me. We will continue praying for the strength and stamina of the Greek people because we know that maintaining freedom and economic prosperity is hard work, but it’s work worth sacrificing for.

Please know that we stand by your side and that’s why we came, to assure you that we are there for you and I want to encourage you because you’re doing wonderful work, in my opinion, in parliament.

We stand by your side, wholeheartedly supporting your efforts to restore Greece’s good fortunes. I wish you well and know that the better days of Greece are ahead of us. Zito i Ellas. God Bless America!