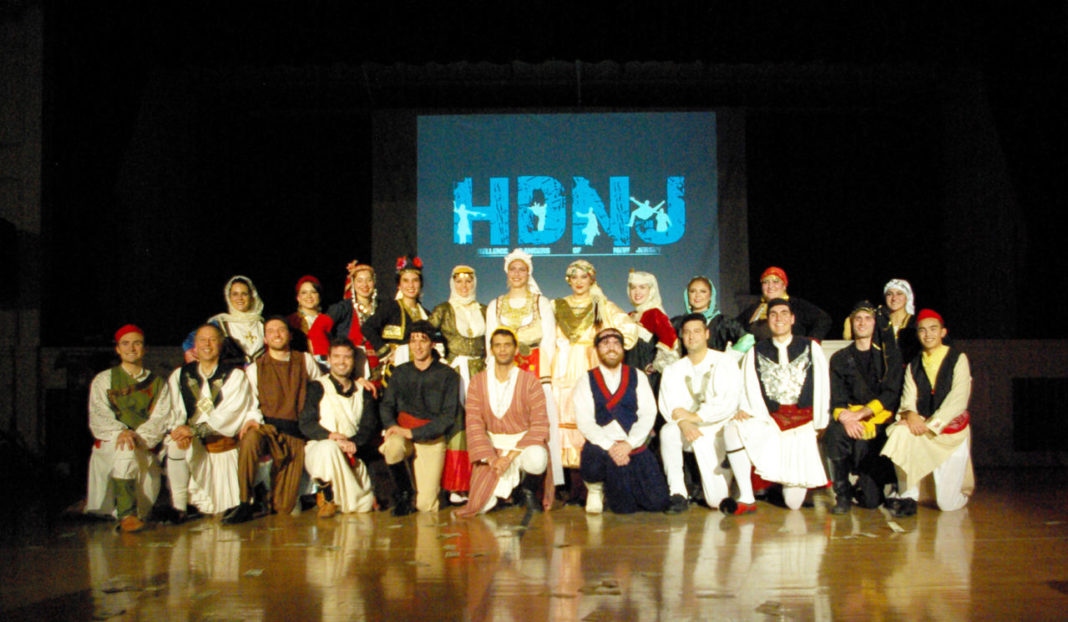 Hellenic Dancers of NJ 46th Anniversary Taverna Night!
Save $10 on adult tickets by reserving by April 15th!
Holmdel, NJ – The nationally famous Hellenic Dancers of New Jersey (HDNJ) presents its 46th Anniversary Taverna Night Dinner Dance, Saturday, April 28, 2018, at Kimisis Tis Theotokou Greek Orthodox Church, 20 Hillcrest Road in Holmdel, NJ. Beginning at 6:30 pm, attendees will enjoy a full Greek dinner buffet and desserts, Greek and popular music, and a special performance and fashion show by the Hellenic Dancers of New Jersey. All proceeds from the event will support HDNJ in preserving the folk dance customs of Greece, and perpetuating Greek heritage in America. Funding from the event will also support the dance troupe’s 2018 touring schedule. Reservations for the 2018 Taverna Night can be made by contacting Aphrodite Bucco, 732.576.1511; [email protected]hellenicdancersofnj.org, or can be made online: http://www.hellenicdancersofnj.org/taverna.php and paid securely through Paypal.  Tickets are $30 adults/students (13 – 23) and $20 children under 12 (by April 15th). Adult tickets are $40 at the door (student/children tickets remain the same as above).
“This year, HDNJ is excited to show off it’s ever-growing repertoire of dances. Our instructional staff has dedicated itself to attending Greek dance workshops in Montreal, Canada; Bethesda, MD, and in several villages throughout Greece, in order to continue bringing our audiences new and fresh dances,” said HDNJ Artistic Director Spiro Petroutsos. “Instead of focusing on any one region, this year’s Taverna Night routine will showcase the incredibly diverse styles of dance that can be exhibited from both past and present-day Greece. Among others, regions that will be represented include; Crete, Macedonia, Thrace, Asia Minor, Pontos, Cyprus and the Aegean Islands. We are very excited to show how much our Greek traditions truly have to offer.”
Several “new” traditional Greek folk dances will debut on the HDNJ stage at the 2018 Taverna Night including:  Perdikoula Imeriva and Aintin from Florina and Serres, in Macedonia respectively, Ethianos Pidihtos from Ethia, Crete, Mantilia, from Pontos, Ballaristos from Mykonos and Syrtos from Tzia (Kea), both in the Cyclades islands. These additions to the troupe’s 350+ dance repertoire not only continue HDNJ’s mission of preserving the folk dance traditions of Greece, but also keep the performances fresh for its long-time supporters.
While the 2018 Taverna Night is a dinner dance celebrating Greek folk dance traditions, the event is a chance for the troupe’s friends, supporters, alumni and anyone who has a love of Greek culture to dance the night away. Proceeds from HDNJ’s Annual Taverna Night will support this all-volunteer 501 (c) 3 nonprofit with general operating expenses. By purchasing a ticket, or an ad in the new electronic journal, audience members directly assist HDNJ in its mission of preserving Greek culture through presentations of the traditional folk dances of Greece.
Founded in 1972, by Fr. Jim and Eleni Chakalos, the Hellenic Dancers of NJ has researched, presented and preserved over 350 folk dances, songs, and traditions from mainland Greece, its islands, Cyprus, and Asia Minor, and passed them on to three generations of Greek Americans.  The troupe has been commended numerous times throughout its 46-year history, for its dedication to its mission, as well as the enthusiasm and excitement of its performances. The dance troupe is currently comprised of first, second, third and fourth generation Greek Americans, ranging in age from 16 – 45, and representing the many Greek communities of New Jersey.
This outstanding troupe is nationally recognized for its presentation of Greek traditions and has performed at a number of local and national events during its 46-year history, including: Dukakis Presidential Rally, Inaugural Festivities for former President Ronald Reagan, Statue of Liberty Weekend Grand Finale, 20/20 ABC Television Program, Queens College of Byzantine and Modern Greek Studies Benefit, O. Elytis Chair of Modern Greek Studies at Rutgers University Benefit, Union County College Folk Arts Festival, the NJ State Ethnic and Diversity Festival, for Ecumenical Patriarch Bartholomew upon his first official visit to New Jersey, and Greek Heritage Day with the Metrostars. Members of the troupe participated in the Closing Ceremonies of the 2004 Olympics in Athens, Greece and at the 2006 Centennial Epiphany celebrations in Tarpon Springs, FL.
April 28, 2018: Hellenic Dancers of NJ 2018 Taverna Night Dinner Dance
Share
Facebook
Twitter
Pinterest
WhatsApp
Linkedin
Email
Viber