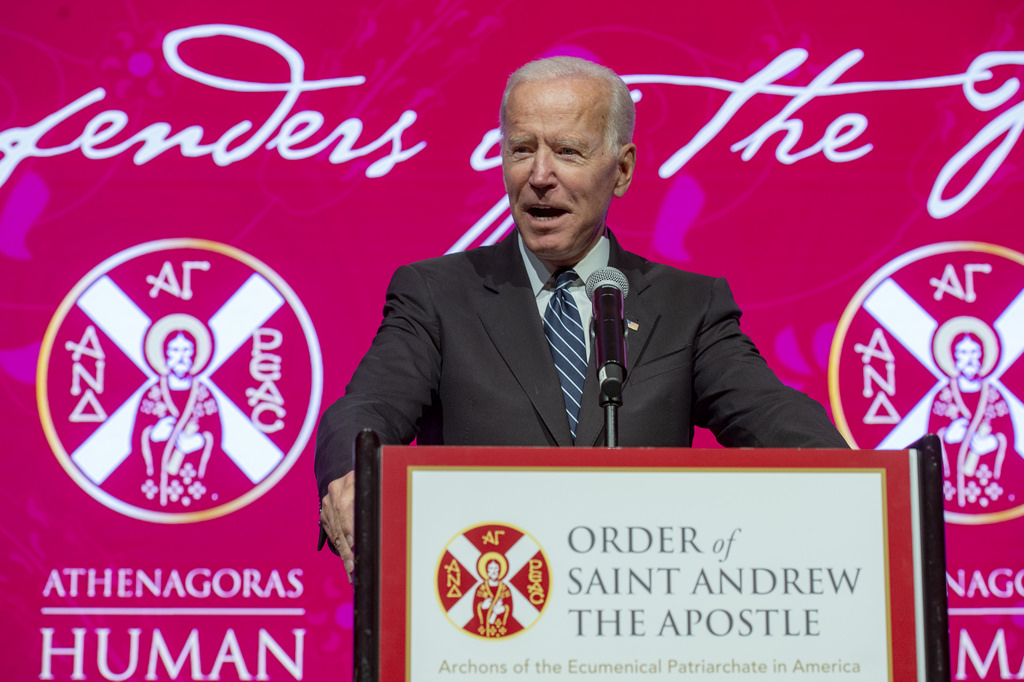 Former Vice President Joe Biden made a surprise appearance at this year’s Athenagoras Human Rights Award Banquet to honor its recipients, Father Alexander and Presbytera Xanthi Karloutsos. Biden, who served two terms under President Barack Obama, originally said because of his tight schedule he would not be able to attend, but at the last minute he squeezed in a surprise appearance and said it was a special honor to be at the banquet.

Ecumenical Patriarch Bartholomew, said Biden, is the “most Christ-like figure I have ever met.” Biden added: “I’ve never met anyone like His All-Holiness. He radiates grace, conviction, and faith in every movement – even,” Biden added with a chuckle, “even when he and I were stuck in a very small, broken-down elevator in Athens last year.”

Biden expressed support for the Ecumenical Patriarchate’s decision to grant autocephaly to the Orthodox Church of Ukraine, “because people in every part of the world should be free to worship as they choose, and it falls to us to protect that freedom.”

Said Biden: “We have to continue to work together around the world to ensure the Greek Orthodox Church can not only control its destiny, but be free of the influence of governments.”

Biden also emphasized that the holiest Orthodox sites in Turkey need to be protected, as well as Muslim communities in Greece, adding that “protecting freedom of religion and universal rights never ends.”

Biden also praised the Greek Orthodox Church in America: “You have an unmatched ability to bring communities together around issues of critical importance to the Church, to our communities, to our nation. You have the universal respect among all our political leaders of both parties.”

The top three greatest honors that he had received during his lifetime, Biden said, were the Medal of Freedom, the Martin Luther King Library Award, and the Athenagoras Human Rights Awards from the Archons in 2015, saying it was “an honor that I do not deserve but that I treasure.” Biden added that “the Greek community has meant so much in my life” and praised the Archons for having “taught my son Hunter and me so much over the years.”

Biden, his voice breaking, recounted the prayers and support that Father Alex and Prebytera Xanthi offered to the Biden family during the illness and death of Biden’s son Beau. “Your family is family to the Biden family,” said Biden. “Your decency, loyalty and love will always be remembered. Your prayers meant so much to the Bidens at the death of Beau,” who died of brain cancer in 2015 at the age of 46.

Biden, a Roman Catholic, ended his comments on a humorous note by pointing out that earlier in the evening he had made his cross the wrong way and so did it again, the Orthodox way.