Special to Hellenic News of America  When you learn a language, you learn about the people who speak it.  Language is a tool to connect...
Read more
Community

City Councilor, Edward Spiros Giannaros, easily won re-election to the Farmington, Connecticut City Council. This will be his third term on the Council. He is...
Read more
People

Markos Papadatos honored with 2021 ‘Journalist of the Year’ Award

Colonel John E. Gavrilis is set to retire after 48 years in law enforcement

Dimitri Vegas of the acclaimed electronic duo Dimitri Vegas and Like Mike chatted with HNA's Markos Papadatos about Dino Warriors, his latest projects, his...
Read more

Akoma was recorded at the acclaimed ARC Studios in Omaha. Photo by Melina Piperis

Greek American singer-songwriter Stavro is releasing his new album, Akoma: Songs for Greek America, on Friday, Dec. 11. Stavro was born and raised in Omaha, Nebraska and is a member of St. John the Baptist Greek Orthodox Parish. The ten-track Greek-English fusion project was recorded and produced by Ben Brodin at the esteemed ARC Studios, the internationally sought-after recording studio which has welcomed artists like Jason Mraz, Phoebe Bridgers, Bright Eyes and She & Him.

Akoma is the follow-up to last year’s Chances, which Stavro also enlisted Brodin to produce. The duo reunited this summer in quarantine for a new challenge: fusing Stavro’s acoustic-pop sound with the music of Greece. Stavro has been penning songs in English and composing for half a decade, but began to weave Greek into his lyrics this year. He also added a new instrument to his repertoire: the Cretan lute.

“I told Ben that I’d been experimenting with Greek lyrics, rhythms, melodies… I wanted to make a record out of it. I had no idea where to begin, or how he would respond to the idea,” Stavro said. 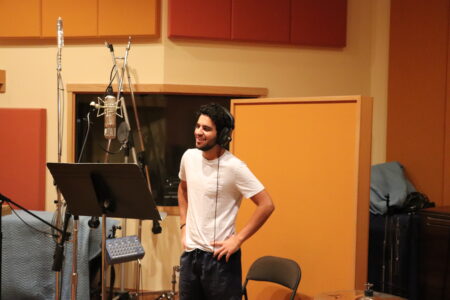 Brodin’s response? “I love a challenge.”

The two began work on ten songs that cover a wide expanse of Hellenic musical tradition, all tinged with Stavro’s lyrical sensitivity and Brodin’s vivid production. “Katerina” is a springing Kalamatiano, while “Zeibekiko Tis Nemeas” is a forceful, crashing tribute to the legendary dance. The album’s emotional centerpiece is “An Den Eho Sena,” a soaring piano ballad.

“Greek Americans are moved by both Hellenic and American music—we even weave the two languages together when we speak—but we need music that expresses that dual character,” Stavro said. “We deserve art that mirrors our unique identity, that honors our story. This album is not a final word, but a first step. I hope it stirs in others a desire to create, collaborate, and dive into the treasures of Hellenism.”