Greeks Sailing by the Stars
Featured

Greeks Sailing by the Stars 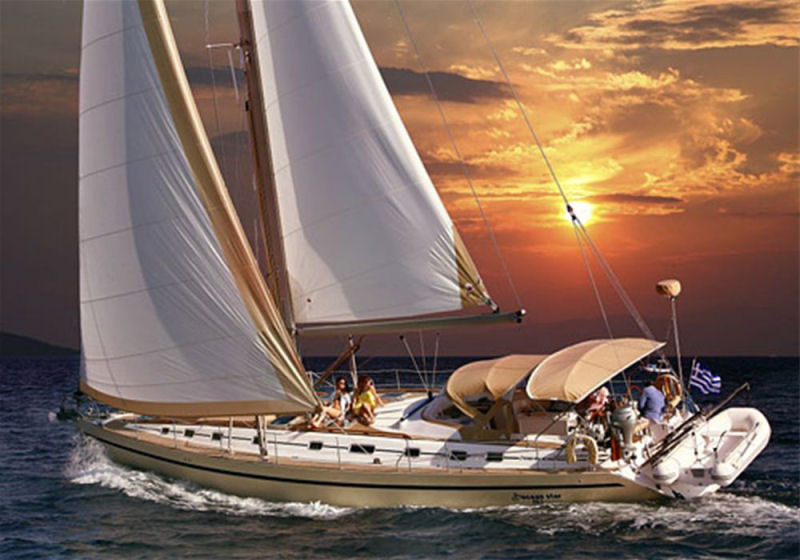 The sun (Helios) was the divine king of the sky for the Greeks. According to the “Homeric Hymn” of Helios: The sun shines his light on both men and immortal gods by driving his four-horse “golden-yoked” chariot across the sky from east to west.

Selene, sister of Helios, was also very important to the Greeks. According to the “Homeric Hymn” praising Selene: “From her immortal head a heaven-sent glow envelopes the Earth… her rays turn night to noon… [The] manes [of her horses] play with the evening, dividing the months. Her great orbit is full and as she waxes a most brilliant light appears in the sky.”

Sappho, c.620-c.556 BCE, poetess of Lesbos, hymned Selene: “The glow and beauty of the stars,” she said, “are nothing compared to splendid Selene when, in her roundness, she burns silver about the world.”

The Greeks knew that neither humans nor nature could survive without the warmth and light of the sun. The sun ripened their crops. The light of the moon was the light of the sun that bathed the moon. In addition, Helios was an important god, usually associated with the son of Zeus, Apollo, god of light, healing, music, archery and prophecy.

Plato traced the meaning of the name Helios from the Dorian Greeks who, convinced that Helios brought people together at its rising, gave Helios a name, Halios, meaning the gathering of people observing the rising of the sun. Plato also explained that the name of Selene came from selas (bright light) and phos (light). The third or fourth century novelist Heliodoros considered himself “of the line of the descendants of Helios.” He worshipped Helios and Selene: “the purest and brightest of the gods.”

Atlas, like Helios, was one of the first gods that made a direct contribution to the cosmogony, cosmology and astronomy of the Greeks. He was a Titan, one of the pre-Olympian gods, children of Gaia (Earth) and Uranos (sky). His name means one who endures or carries. He was the guardian of the pillars that held up the sky. Another tradition has Atlas sustaining more than the heavens.

According to the Roman architect and engineer of the first century BCE, Vitruvius Pollio, Atlas taught mankind “the sun’s course and the revolutions of the moon and all the stars.” Indeed, according to the Greek historian Diodoros, who was a contemporary to Vitruvius, Atlas was the founder of science. He perfected astrology and established astronomical science. He invented the movement of the heavens and taught that the stars and the heavens have the shape of spheres. He also wrote the first astronomical textbook. These reasons led people to believe that Atlas supported the entire cosmos on his shoulders.

Atlas met Herakles and educated him in the science of the heavens, passing on to him all that he knew about astronomy. Herakles then brought that knowledge to Greece. Thus, Herakles won the affection of the Greeks for his courage and enlightenment. He became a philosopher and a scientist who opened the heavens to them.

Atlas married Pleione, daughter of the Ocean. She gave birth to seven daughters at Kyllene in Arkadia of Peloponnesos. These girls took their mother’s name and became the Pleiades. Zeus made love to these women. For example, out of the union of Zeus with Maia came the messenger of the gods, Hermes.

After Zeus and the Olympian gods overthrew the Titans from running the universe, Zeus placed the seven daughters of Atlas in the constellation Pleiades (Πλειαδες from πλεω, which means “to sail” probably because the Pleiades rise at the beginning of the sailing season).

Both Homer and Hesiod mention the Pleiades. The god of metallurgy and technology, Hephaistos, puts the constellation of the seven sisters on the shield of Achilleus. The moment goddess Kalypso allows Odysseus to leave her island, Odysseus keeps looking at the Pleiades as his guide to finding his home island Ithaca. As for Hesiod, the Pleiades mean the start of the harvest.

The Hyades may have also been daughters of Atlas. The name Hyades, Υαδες, comes from the verb υω, which means sending rain; so the constellation Hyades is related to the raining season.

The other major constellation at Homer’s time, Arcturus (Αρκτουρος), the Bear or Ursa Major is also known as Bootes (Βοωτης), plowman or a farmer using a bullock, cow, bull or ox to cultivate the land, especially the grape vine, a gift of Dionysos, son of Zeus.

Dionysos honored his earliest follower Ikarios, his daughter, Erigone, and their dog, Maira. Dionysos put Ikarios in the constellation Bootes. Next to Bootes, Dionysos placed Erigone as Virgo and Maira as Canis Minor, the Lesser Dog.

Ikarios planted the grape vine of Dionysos and made wine. He gave some of that wine to some farmers who got drunk and killed him. As a result Erigone hanged herself and Maira drowned himself. These deaths infuriate Dionysos. He spread madness among Athenian women who hanged themselves. The oracle at Delphi explained to the Athenians the cause of the deaths and they hanged the shepherds who murdered Ikarios. The Athenians also honored Dionysos with an annual grape festival they called Aiora, Swinging. Girls swung from ropes tied to trees.

Isaac Newton tried to date the events of ancient history with astronomical calculations. He studied Greek mythology and he convinced himself that most of the constellations represented persons and events before the Argonaut expedition.

He assigned the invention of constellations and first heavenly sphere among the Greeks to Cheiron the Centaur, teacher of the greatest Greek heroes, including Herakles. He studied Greek astronomers. He said Cheiron built the “primitive” sphere in 939 BCE for the Argonauts’ perilous journey to Kolchis for the recovery of the Golden Fleece. Newton also believed that one of the Argonauts, Mousaios, constructed a heavenly sphere on which he painted the constellations of Cheiron to guide the Argonauts “sail by the stars.”

From the HUFFING TON POST with permission by Evangelos Vallianatos

He is the author of 6 books and more than 225 articles. His book on the workings and failure of EPA, “Poison Spring,” was published in April 2014 by Bloomsbury Press.