Importer has found life and business to be fruitful By David Bjorkgren, Special to the Hellenic News of America

Importer has found life and business to be fruitful

The 76-year-old owner of Tastyfrutti International, headquartered in Philadelphia, has been in the fruit business for over five  decades. The import expert contracts with fruit producers around the world and here at home, offering his fresh in-season wares to major retailers nationwide that include Wegmans, Acme and Kroger supermarkets. The company works with fruit growers in California, Chile, Peru, Greece , South Africaand Mexico.

Tastyfrutti International averages about $30 million a year in business and employs twelve permanent employees and two to four seasonal employees during the busy season.

For those who follow this kind of thing, you may recognize Economou’s company under its old name, Unifrutti of America.

Incorporated in 1984, Unifrutti of America was part of an international fruit import company. Back in October 2015, the family owners didn’t want to keep the American part of its international company, so Andy Economou was there to make them an offer. The former Unifrutti general manager, who already owned 25 percent of the company, bought out the family and acquired Unifrutti of America on condition the company name be changed to avoid confusion.

There were Unifrutti operations in Chile, South Africa, the Philippines, Italy, Europe, Greece, Asia and Japan, as well as America. By changing the name to Tastyfrutti International, Economou could make sure his customers and fruit producers knew that they were dealing with him, not with another Unifrutti holding company.

“I procured my own product in Chile or in Greece or wherever I was so I didn’t have to go through them. The main thing was to have a new identity because I’m a loner.(independent thinker)

He hired a marketing agency and started researching a new name. They kicked around possibilities. Tuttifrutti and Unifruico are already owned by the company.

“The agency wanted to use my name—Econofrutti, but I said no because maybe I want to sell the company, maybe things change, or I want to give it to somebody else,” he said.

Economou said he polled his entire staff. After lots of advice and back and forth debate, everyone settled on Tastyfrutti International. The official name change began July 15, though customers and the media were notified ahead of time. The name change is the first in 32 years, Economou noted.

Economou said the 21st Century has brought a lot of changes to the fruit import business.

“Whether I like it or not there are changes in our industry so I have to follow them or at least comply with them,” he said.

Something as simple as email has changed the way they do business. Deals were struck over the phone. Now he’s leaving voice mail messages or hoping someone responds in an email.

The biggest change is how supermarkets are conducting business.

“What happened, there was a lot of consolidation,” he said. It started about 10 years ago. “With that consolidation, they created more centralized buying.”

Consolidation means the bigger chains can deal with exporters directly.

“For the convenience of the buyer, they will go to one or two guys who can get this product and it’s done,” he said.  It’s no problem for the giant exporters because they have enough products, enough volume, to cover the needs of the big supermarket chains, he explained. The supermarkets become their own importers.

“This consolidation has caused increased competition for the small guy,” he said.

Ultimately, that’s leading to a loss of U.S. jobs because the big chains are dealing directly with Chilean or Peruvian exporters, instead of a U.S. importer.

“We’re losing the sales and or the revenue, my revenue. I pay taxes.  The Chileans, the Peruvians, or whoever they are, they sell to Kroger direct and pay no taxes,” he said.

And there are even more drastic changes coming in the produce business. Big companies are investing in U.S. land for future crop production, he said. “The population’s going to grow. The statistics are there. The production that we have now cannot cover the increase in population so they’ve got to find more land and different systems.”

That could mean hot houses in Iowa where it’s cold, and vertical farming in warehouses to produce crops efficiently so less land and water need to be used.

Automation and robots are also in our future. One day soon, robots will prepare your food order at supermarkets, Economou predicted. “I think you’re going to be driving in like an ATM and at the end you’ll go down with your credit card, and, here are your bags,” he said.

At the other end of the food chain, robots will be growing and harvesting crops, Economou said, particularly as human labor becomes expensive and scarce.

Already, experiments are being done to have robots pick strawberries, he said.

“Now we have the Mexicans in California, South America, immigrants or whoever picking the fruit at harvest because without them, you’d be starving,” he said. “Reality is reality. California, without the Mexicansworkers, we would be dead.”

If robots can be developed that can see and feel, to tell if a fruit is ripe or not ripe, they can take over a lot of the work, he said.

Jobs lost to those robots will be replaced with robot repair, development and operations.

“Remember when they said, ‘the computers are coming and now they’ll have less employment’ and what happened, exactly the opposite. You have repairs, programming, you have systems. You may not have someone bagging your fruit or picking your fruit but somebody’s going to be working…to make sure that robot is not giving you the finger,” he said.   “Maybe those jobs will be better paid so the consumer will have more money.  You cannot look at it negatively. In the beginning, there are a lot of people who don’t like it. Who likes change? It’s very difficult.”

Economou has always been a self-starter, with an early vision of coming to America.

“Believe it or not, since 11 years old, I was impressed with the Hollywood movies.”

He made it to America in 1959.  “The biggest disappointment I had was going on Hollywood Boulevard when I came here. It was so dirty,” he said. “I thought it would be the Beverly Hills area.”

He attended the University of Southern California in Los Angeles.

The man from Athens is proud he never took a dime from anyone, not even his parents. He worked to pay for his education at USC, and remembers many times dining on jelly and bread to make ends meet.

“My father came from very humble beginnings,” Economou said. “He worked like a dog, was treated like a dog.”

His father was 12 when he arrived in Athens from his village. He worked for a grocer.  “He used to push the cart like a horse,” Economou said.

His father was disciplined, saving his money until he could start his own business.

“He did well but he didn’t want us to do what he did,” Economou said.  There wasn’t a lot of money, but Economou and his four  brothers still grew up with good food and good schools.

“I’m privileged to say he gave us everything we needed,” he said.

Economou met his wife, a Bostonian, while at USC.  They got married in the early 1960s and started a family. At one point, two of Economou’s brothers, his wife and his son were living at the house.

Economou ended up at the USC business school and worked as a banker for eight years at Gibraltar Financial, which was later bought by Bank of America.

“I was not into produce,” he said.

Though he and his wife are no longer together, it was Economou’s wife and her family that got him into the fruit business.  She and her family had moved to California because her father was in the produce business.

Economou’s father-in-law asked him three times to join the business. With a little pressure from his wife, Economou gave in. He was reluctant at first, feeling that “blood is thicker than water,” but agreed to join up, with conditions.

“I said I’m not coming for baloney. I’m going to be part of the business. They said ‘no problem.’”

It was his father-in-law that taught him the produce business and Economou helped them with the family farm, until union organizers destroyed their vineyard.

“You don’t do things like that because I’ve never done anything like that to anybody so you don’t do it to me,” he said. “So I said, ‘that’s it.’”

He and his father-in-law ended up working for a company called Superior Farming after Economou wrote a marketing proposal for them.

The company and Economou parted ways when someone suggested his father-in-law should leave because he was too old.

“I told him, ‘listen, I came with him and I leave with him. That was my comment. That was it. So I left,” he said. 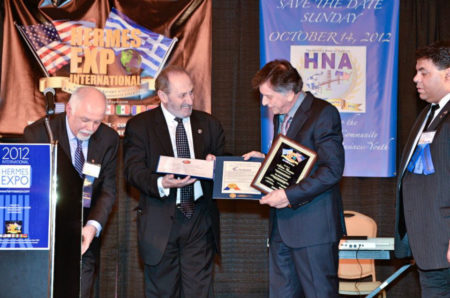