CommunityChurchIn the Footsteps of Byzantium: Emperor Justinian in the Basilica of St....
ChurchCulture

In the Footsteps of Byzantium: Emperor Justinian in the Basilica of St. Vitale 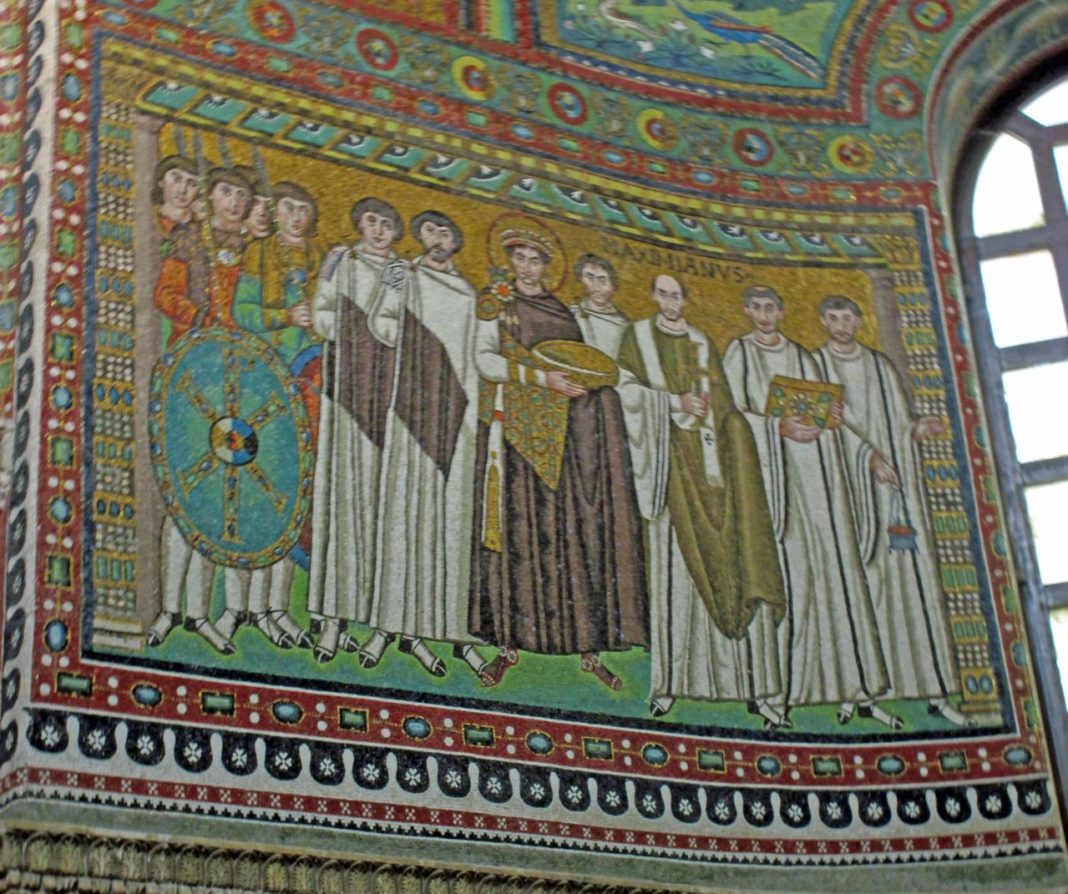 “Rather let the crime of the guilty go unpunished than condemn the innocent.”1

The Catholic Church and the government of Italy and people preserved Justinian’s jewel, the Basilica of St. Vitale in Ravenna. We owe them respect and admiration for helping us understand Constantinople in the West, by visiting Ravenna in Northern Italy.

One of the most famous images of political authority from the Middle Ages is the mosaic of the Emperor Justinian and his court in the sanctuary of the church of San Vitale in Ravenna, Italy, dating from 540 AD. The mosaic program can also be seen to give visual testament to the two major ambitions of Justinian’s reign: as heir to the tradition of Roman Emperors, Justinian sought to restore the territorial boundaries of the Empire. As the Christian Emperor, he saw himself as the defender of the faith. As such it was his duty to establish religious uniformity or Orthodoxy throughout the Empire.

Justinian is in the center. He is haloed and wears a crown and a purple imperial robe. He is flanked by members of the clergy on his left with the most prominent figure the Bishop Maximianus of Ravenna being labeled with an inscription. To Justinian’s right appear members of the imperial administration identified by the purple stripe, and at the very far left side of the mosaic appears a group of soldiers.

Why should we care about an emperor of a conquered, extinct empire that existed about 1500 years ago? Among his many achievements is a legal code that would influence medieval law for generations. The Corpus Juris or  Code of Justinian, continues to have a major influence on public international law. Its four parts thus constitute the foundation documents of the Western legal tradition.3

Justinian was a man of large views and great ambitions, of wonderful activity of mind, tireless energy, and an unusual grasp of detail. In attempting to restore the Byzantine Empire to the territorial extent of the Old Roman Empire, Justinian’s aims were those of nearly every Byzantine emperor, even though such plans were generally doomed to failure. It should not be forgotten that Justinian renewed Byzantine rule and Hellenic influence in parts of Italy for several centuries and that, for more than a half century, sound government was given to North Africa, from which came salvation for Constantinople in the person of Heraclius in 610. Justinian’s legal work and the magnificent Great Church (as Hagia Sophia was called) have won him unending fame, and the literature, poetry, and philosophical achievements of his contemporaries’ bear witness to the outstanding quality of 6th-century civilization in the Eastern Roman Empire.4  Emperor Justinian believed “Safety of the state is the highest law.”