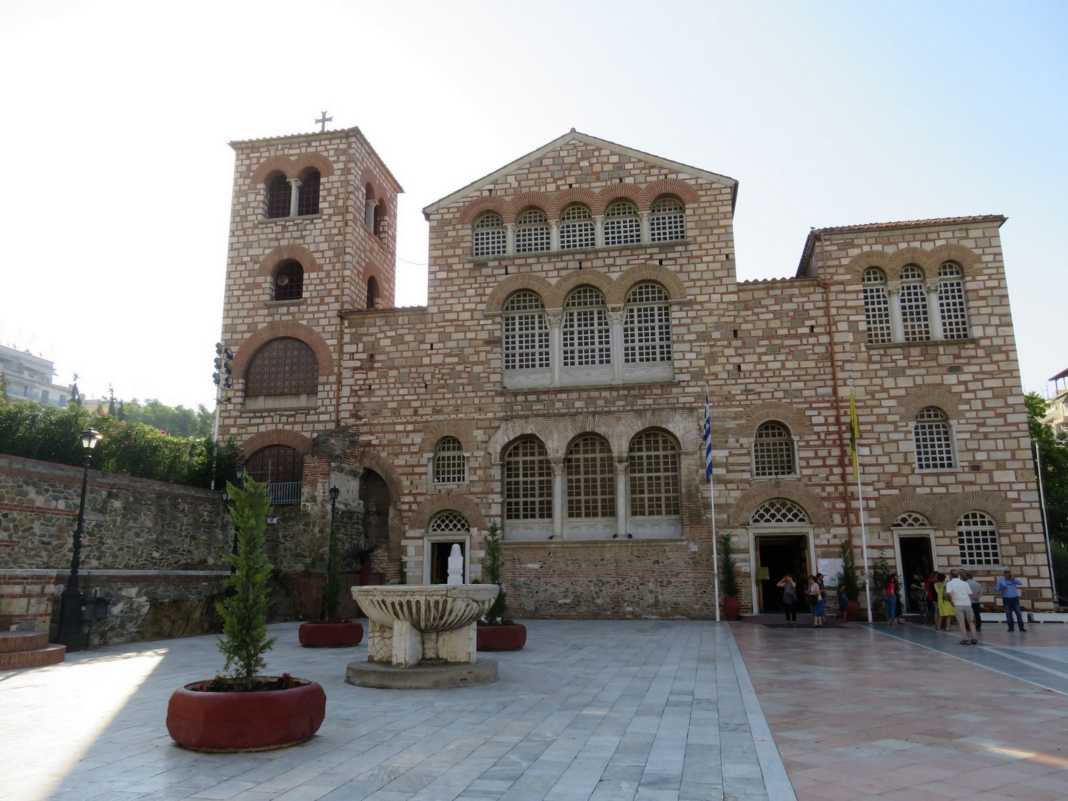 “There was a historic St. Demetrios. His bones are here. There is historical proof,” explained attorney Panagiota Petropoulou during our recent Kapogiannis excursion of Thessaloniki. St. Demetrios excites the imagination of all as a great warrior Christian. I was with middle-class Greeks from the provincial city of Tripolis. The day we were there no gypsies were present.  It was summer and they were on the Greek islands. Our trip was stress-free.  The group worshipped and prayed with deep devotion. Their religious faith was admirable. They believed.

“Agios Demetrios is arguably considered the most important church of Thessaloniki by the majority of the locals for religious, historical and artistic reasons as well.

Devoted to the patron Saint of the city, it has a long and rich history that pretty much depicts some of the city’s most important events that shaped its identity.

The temple is a fine sample of Byzantine religious architecture of the late early period of the Empire (7th century A.D.). The initial architectural design and interior decoration were significantly deteriorated, due to continuous reconstructions, additions and several disasters that occurred throughout the centuries. Dated back to the 4th century A.D., a small chapel was constructed over the ruins of older roman baths. More than a century later, the initial structure was replaced by a three-aisled Basilica, by a prefect named Leontios, while finally reconstructed in 629 – 634 A.D., as a five aisled basilica. During the Ottoman occupation period, the church was turned into a mosque as Thessaloniki was captured by the ottomans. A number of mosaics and wall paintings were destroyed (1430 A.D.).”1

Perhaps the most famous and interesting part of the temple was the underground ancient “Crypt”. The crypt was rediscovered after the fire of 1917 and was finally restored as an exhibition/museum in 1988. According to the Christian Tradition, the saint was imprisoned here and died in 303 A.D. It is a well-designed and restored ancient building that surprises most visitors because of its atmosphere and exhibits.2

A few years ago, I went to St Demetrios Cathedral in an expensive excursion composed of liberal, non-religious international affluent tourists. I was the only New Yorker of my background. The group wanted detailed, secular,  non-religious facts on the Cathedral’s structure and iconography. Their coldness was transparent in regard to Who, What and Why questions on the Saint’s history. No one was willing to assist me in a personal photo. The narrative was devoid of feeling and soul. There was no mention of the view that the saint was the savior of the city during barbaric invasions. The deep respect of the Slavic Eastern Christians for this warrior saint was not stated. The Russian army has St Demetrios as its patron saint with St. George always seen next to him. No spirituality, with cold secularism.

The 2019 Kapogiannis Travel excursion had colorful members, such as Christos Moutzoupoulias, a taxicab driver who was nicknamed “The Doctor” with his Glamorous wife Kassiani Andrianopoulou, an aesthetic cosmetologist. Niko Petropoulos, a retired government employee with his professional daughters Panagiota and Irene  had pleasant smiles and showed sincere worship of the saint at his tomb. They explained what the relics and crypt mean to the Greek Orthodox Christian. Entering St. Demetrios Cathedral reminded me of the beauty of Sam Mark’s Cathedral in Venice and the early Christian churches of Ravenna shown to us by guide Marta Chirico. I felt the soul of St Demetrios with devout Greek Orthodox worshippers from Tripolis, in the heart of the Peloponnese.

I visited Thessaloniki through a tour of  “Constantinople (Istanbul), Princess Islands, Bosphorus” with Kapogiannis Travel. Mr. Takis Kapogiannis was the group leader. Administrator Maria Kapogiannis has been working with me for several years in her excursions with Associate Group leader Mrs. Kostoula Kapogiannis.

https://hellenicnews.com/off-beaten-trail-demetrios-russia/ – Off the Beaten Trail: Demetrios in Russia