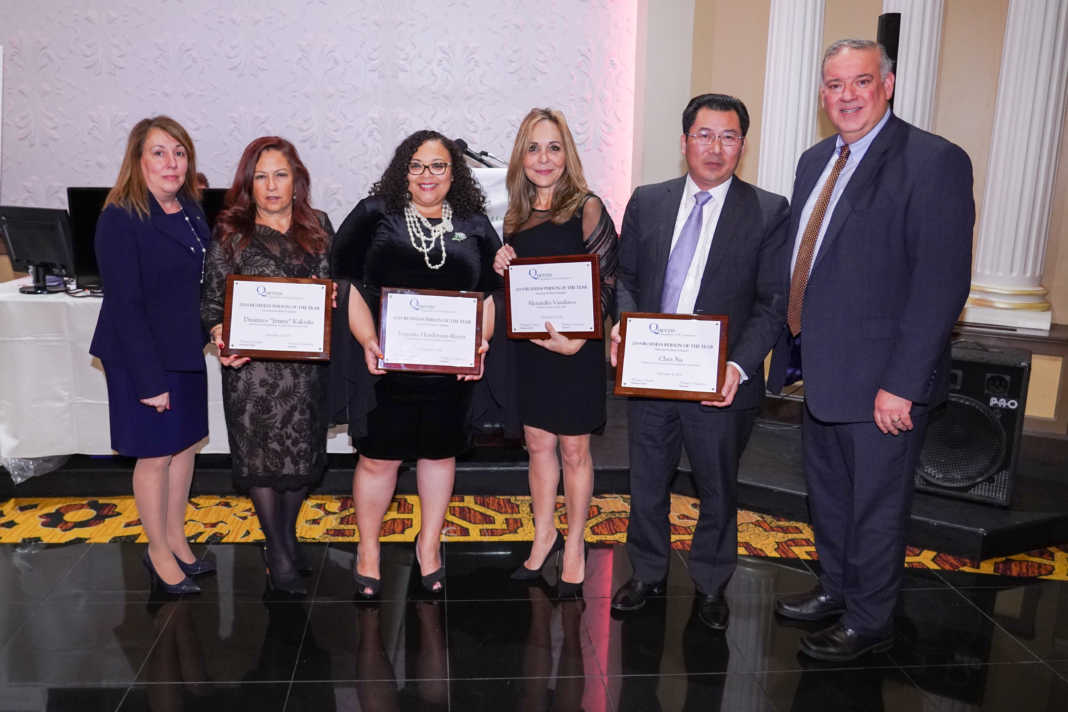 QUEENS, NY, December 9, 2019—On the evening of Wednesday, December 4, over 350 business, government and community leaders from throughout Queens gathered at Terrace on the Park for the Queens Chamber of Commerce’s annual Business Person of the Year Awards Dinner.

“Towards the end of each year, we like to look back and acknowledge some of the women and men who make Queens’ business community so special. It is our privilege to honor Rick Cotton, Tyquana Henderson-Rivers, Chris Xu, Alexandra Vassilaros and the late Jimmy Kaloidis at this year’s event. These individuals are not only extraordinary business people; they believe in doing well by doing good, and giving back. They may come from different industries and different walks of life, but they all represent the very best of Queens and contribute greatly to creating opportunity throughout the borough,” said Thomas J. Grech, President and CEO of the Queens Chamber of Commerce.

“This award recognizes the tangible progress made by the Port Authority on its multi-billion dollar airport redevelopment projects in Queens at LaGuardia and JFK. Congressman Meeks, Borough President Katz, and Queens elected officials as well as the Queens Chamber of Commerce and other local organizations have been tireless partners in our efforts to transform LaGuardia and JFK into 21st century airports fit for the greatest city in the world. The Port Authority is committed to rebuilding these airports in close consultation with the local communities and ensuring that real benefits flow to the Queens communities impacted by the airports and by these major construction projects,” said Rick Cotton.

“It is not everyday that someone like me, who came from the streets of Southeast Queens, stands up here among so many other distinguished honorees,” said Tyquana Henderson-Rivers. “I am humbled and I am honored by this award.”

“Queens is the best advertisement for why diversity works,” said Alexandra Vassilaros. “Our borough is a shining example of how different groups of people can live together, work together, and thrive together.”

“Jimmy loved friends, family, and community, and it is truly fitting that he is honored on a night that celebrates our tight-knit Queens business community,” said Helen Psaras, a close friend of the late Dimitrios “Jimmy” Kaloidis, as she accepted the posthumous award on his behalf. “Thank you so much for recognizing him tonight.”

During the dinner, students from the Dimitrios and Georgia Kaloidis Parochial School, a school endowed by the Kaloidis family, performed the national anthems of the United States of America and Greece.

“I started to work here in Queens after less than a year of high school, making forty dollars a day,” said Chris Xu. “Thanks to the opportunities this borough had to offer, I’m here before you today.”