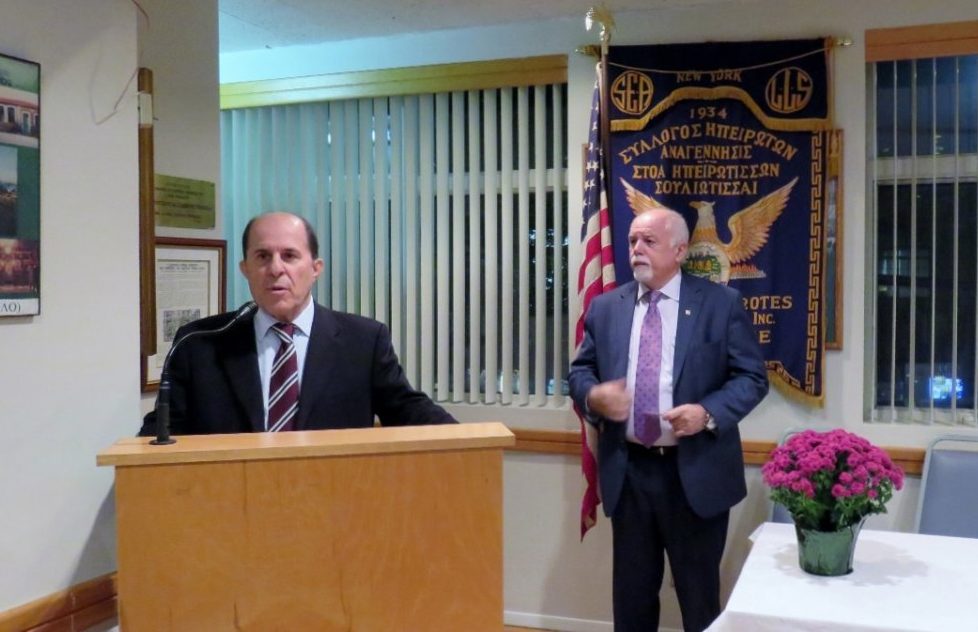 “Our liberty depends on the freedom of the press, and that cannot be limited without being lost.” — Thomas Jefferson, U.S. Founding Father. The Society of Epirotes“Anagenesis” and the Ladies’ Auxiliary “Souliotisses,” the Heritage Museum of Epirus and Hellenic News of America celebrated “OXI” Day on Friday evening, October 28th, 2016 at514 Broadway (between. 29th St. & Crescent St.) in Astoria. The Epirotes Societies and Museum honored the 29th Anniversary of the Hellenic news of under the leadership of Paul Kotrotsios, Founder of the Hellenic News of America & President of Hermes Expo International.  Dr.  Stefanos Foussas, president of The Hellenic Cardiological Society, was the keynote speaker. National and international leaders spoke. Over one hundred persons attended. A lavish reception of Greek cuisine followed. Political leaders and members of the national and international community gave greetings. “Oxi” Day commemorates the Hellenic counterattack against the invading Italian forces at the mountains of Pindus during the WWII.

“Greece is going through difficult paths,” explained keynote speaker Dr. Foussas. “We will find the solution and overcome our problems. I am very touched to see persons here tonight who are like my family. On August 15th, 1940, the old, young and sick persons were praying at the Evangelistria Church to the miraculous icon of the “Panagia tis Tinou”. The Italian Axis power torpedoes and sank the Elli battle cruiser. Horrific! Greece did not declare war. Instead on October 28th, 1940, Italian ambassador to Greece, Emanuele Grazzi gave an ultimatum to Greek Prime Minister Ioannis Metaxas to surrender. He replied “Oxi” (No).  The Italian troops invaded the mountains of Pindus on October 28th. The sacred soil of Marathon and the sacrifice of the immortal 300 Spartans at Thermopylae came alive in the hearts of every Greek.

Winston Churchill said ‘If there had not been the virtue and courage of the Greeks, we do not know the outcome of WWII would have been…..We will say that Greeks fight like heroes, but that heroes fight like Greeks.’ Dr. Foussas explained that Epirotan women carried food and ammunitions on their backs across the mountains to the Greek troops. By October 21, 1940 The Greek army freed Greek Epirus, reaching Koritza and Argyrokastro. A world power could not defeat Greeks.” My father-in-law George Panagiotis, a farmer from Arcadia, Peloponnese, fought in the victorious Pindus campaign. He was taken as a POW. He escaped the Axis powers by walking from Yugoslavia down to the Peloponnese.

On April 6, 1941, the Germans came. The German occupation began. Especially in the first winter of occupation (1941–1942) food shortage was acute and famine struck especially in the urban centers of the country. Food shortage reached a climax and a famine was unavoidable. During that winter the mortality rate reached a peak. This was the worst famine the Greeks experienced from ancient times. Greek soldiers continued to fight both on the mainland and during the battle for Crete in May. There, large numbers of civilians even joined in the fighting against the German airborne invaders. At El Alamein, the Greek battalions fought with valor.”

“It is now 76 years later,” he said. “What is happening in Greece? We have another German occupation. We were ruined as a nation, forgetting our language and traditions. Television spoiled our nation. We lost our fortunes. Our country has starving loans. Noe, In October 2016 our country that fought for heroism, has a poor public relations image. We must persevere. We must hold on to the ethics of 1940 and set an example for future generations.”

The speaker concluded his presentation with famous WWII quotes. Charles de Gaul: “I am unable to give the proper breadth of gratitude I feel for the heroic resistance of the People and the leaders of Greece.” (From a speech of his to the French Parliament after the end of WWII). Joseph Vissarionovich Tzougasvili Stalin: “I am sorry because I am getting old and I shall not live long to thank the Greek People, whose resistance decided WWII.” (From a speech of his broadcast by the Moscow radio station on 31 January 1943 after the victory of Stalingrad and the capitulation of marshal Paulus). Adolf Hitler: “For the sake of historical truth I must verify that only the Greeks, of all the adversaries who confronted us, fought with bold courage and highest disregard of death.. ” (From speech he delivered to Reichstag on 4 May 1941).

Benito Mussolini: “The war with Greece proved that nothing is firm in the military and that surprises always await us.” (From speech he delivered on 10/5/1941). Georgy Constantinovich Zhoucov 1896-1974 Marshal of the Soviet Army: “If the Russian people managed to raise resistance at the doors of Moscow, to halt and reverse the German torrent, they owe it to the Greek People, who delayed the German divisions during the time they could bring us to our knees.” (Quote from his memoirs on WWII). Franklin D Roosevelt, US President 1933 – 1945: “On the 28th of October 1940 Greece was given a deadline of three hours to decide on war or peace but even if a three day or three week or three year were given, the response would have been the same. The Greeks taught dignity throughout the centuries. When the entire world had lost all hope, the Greek people dared to question the invincibility of the German monster raising against it the proud spirit of freedom.”

AESCHYLUS: “BECAUSE ONLY WE (THE GREEKS), CONTRARY TO THE BARBARIANS, NEVER COUNT THE ENEMY IN BATTLE.” “This is us,” stated Dr. Foussas. Our country. We will keep Greece free. Zito I Ellada (long live Greece). “

The 29th Anniversary of the Hellenic News of America is being honored with the presence of Paul Kotrotsios, who is Founder of the newspaper and Hermes Expo International. He is from the village of Parakalamo, Yiannina, Epirus, near the Albanian border. Globalism is eliminating borders, culture and language. Mr. Kotrotsios is combating these negative effects. “We must keep Hellenism and our ethics alive,” he believes. “The business and education sectors must help us at Hellenic News of America and the annual Hermes Expo International to keep our heritage alive. We must not assimilate. Today, more than ever, we need to work more intensively towards the perpetuation of our traditions.”

The Hellenic News of America has integrated into social media brilliantly. The https://hellenicnews.com  is a colorful, informative website that has an international following. The newspaper’s presence on the internet is delivering a message promoting language, culture and religion brilliantly. He is a humble, self-made man who believes “to have a friend one must be a friend.” Publisher Kotrotsios has aided immigrants and Americans search for economic opportunities. He is a reflection of the many supporters of Hellenism from the mountains of Epirus. Mrs. Linda Kotrotsios has been the force in the shadows for twenty nine years. Her administration is outstanding. Ms. Aphrodite Kotrotsios, Co-Publisher of the Hellenic News of America, family and staff are carrying on this extraordinary newspaper online and in hard print. A congratulation to the Hellenic News of America’s continued support of Hellenic Education and Hellenic Education organizations.

The Director explained “the museum is located in the heart of the Greek community of Astoria, Queens. It is dedicated to preserving the culture and cultural traditions of Epirus, Greece. We are making Hellenic heritage accessible in ways that enrich present and future generations through exhibitions and public programs. This is our gift to our children. I pledge to bring our children to our pride, our treasure, the Heritage Museum of Epirus. No one has what we have. Professor Nicholas Alexiou of Queens College has brought his students to visit and is here tonight.” The museum is located on the third floor of the Epirotan Cultural Center at 2514 Broadway (between. 29th St. & Crescent St.) in Astoria.  It is conveniently located 3 blocks from the Broadway stop on the N and Q subway lines.